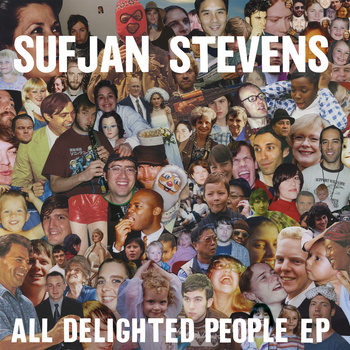 You may be familiar with Sufjan Stevens from his two creative albums devoted to US states, Illinoise and Greetings from Michigan. Or you may have heard his folksy, indie rock renditions of popular holiday tunes in Songs for Christmas. But you may be less familiar with some of Sufjan’s latest work such as his collaboration with the Brooklyn Academy of Music to create BQE,  a symphonic tribute to the Brooklyn-Queens Expressway, his brilliant essay in The Best American Nonrequired Reading, or his musical contributions to various bands including the piano in The National’s Boxer. Equally, you may not be familiar with his most recent EP release All Delighted People.

All Delighted People introduces us to a slightly different Sufjan Stevens than we heard in Illinoise and Michigan, but this EP delivers even more of what one reviewer called “the irrepressible creativity and innovation” that is quintessentially Sufjan. The EP is self-described as “a dramatic homage to the Apocalypse, existential ennui, and Paul Simon’s ‘Sounds of Silence.’” And as I continue to listen to the album, I would add to that list an authentic struggle to assert delight amidst a dark world.

In this way, the title All Delighted People reveals a paradox at the heart of Christian existence in a fallen, broken world. Indeed, the title track focuses not so much on delight as lament, ending by exclaiming “Oh! But the world is a mess! Oh! But the world is a mess!” Therefore, are the delighted people, those people who are “raising their hands,” simply hypocrites within the mess of the world? Or are they being a new kind of delighted people, resolutely delighted in the face of inevitable tragedy?

I think we find the latter in the mysterious melodies and vulnerable confessions that comprise each song. It seems that Sufjan, along with other “delighted people” presented in this music, are people who have discovered delight on the other side of tragedy. This brings us to the heart of a Christian vision of reality, but few Christians musicians are as honest as Sufjan in exposing the suffering involved in being in the world. What is more, few Christians honestly juxtapose this reality with a new kind of delight, the kind acknowledged in “Arnika,” which includes the refrain “I am tired of life” but ends with hope: “No I’m not afraid of death or strife or injury, accidents, they are my friends…”

The lyrics expressing delight in the midst of darkness fit masterfully with music that dances with fluttering woodwinds at one moment and plunges into sorrowful piano melodies the next. Rejoicing is punctuated with blasting horns and exclamatory choruses; lamenting is carried along with the methodical guitar picking and Sufjan’s roaming vocals. As such, All Delighted People contains a rare aesthetic fit between music and lyrics, form and content.

I have an incredible amount of respect for Sufjan Stevens, and even more after soaking in All Delighted People. I respect Sufjan because he is a Christian who directly confronts the darkness of the world without giving up on delight. And I respect Sufjan because he does so without sacrificing creativity and musical excellence. If you are not familiar with Sufjan’s music, you may find some moments in this 60 minute EP to be strange and even abrasive. But I encourage you to persevere, and to listen intently. I think you will discover a new way of imaging delight in a dark world.

*You can listen to All Delighted People here for free, and follow the lyrics as you listen. If you love it, which I think you will, the album can be purchased for only $5.