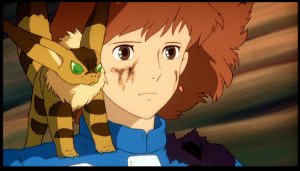 Editor’s Note: This is the first post in our new Visiting Scholars series, a series intended to draw students and faculty from other theology/arts programs including Duke Initiatives in Theology and the Arts, the Brehm Center of Fuller Theological Seminary, and the Yale Institute of Sacred Music into the theology/arts conversation here on Transpositions.

Let those dear hearts read Harry Potter. Throw ‘em head-first into The Chronicles of Narnia. Have a ball with Tolkien. But once in awhile, fellow youth workers, if you dare, I challenge you to venture forth, just occasionally, from the tried-and-true modern volumes of British fantasy lit by Christians and into the imaginative landscapes lying beyond Western borders.

The Bible fits into that latter category, by the way. But if you need help even starting there, as I do, my advice is simple: make some popcorn, and plant your church kids in front of movies by Hayao Miyazaki. Specifically, make them watch his 1984 masterpiece, Nausicaä of the Valley of the Wind.

And not just because I love it.

But here’s why I do:

#1: Funky narrative is the norm.

When the storytelling feels most radically surprising or nonlinear in Miyazaki’s films, it is usually because of a piece of magic, or because a backstory hitherto unknown comes flying in from an oblique angle, and characters or environments act in completely unexpected ways. Such is the way of anime, and such is the way of life. Nausicaä takes place in a fantastic and troubled universe, and traces a complex relationship between three ancient kingdoms, an unstable ecosystem filled with house-sized insects called Ohms, the gruesome and forced resuscitation of a giant creature from the mythic past, and a wind-riding princess’s vocation to lead her people to peace. Such a labrynthine and strangely-detailed progression of story requires patience. It allows for good things to appear initially unattractive. It expects adventure.

This adventure manages to trace the entire history of salvation if you pay close attention. But, as in most of Miyazaki’s films, there are an amazing number of loose fringes left in the tale as relationships, backstories, magical technologies and ancient myths come crashing together into the present; yet out of this tangle emerge vivid and poignant dramatic scenes that don’t always follow one upon the other in a narrowly logical way. The gut-level through-line of the story, saturated with a history we cannot completely take in, still makes sense even when the zigzagging (sometimes downright ugly) pieces don’t. In order to seek the salvation of her people, princess Nausicaa must relentlessly press into the present moment with all the weight of the past, and from this emerges both the full horrors and joys of confronting evil with truth. Salvation is a creative act; it emerges from history as a live and new response entirely congruent with, and transformative of, the present reality.

In terms of theological anthropology, this is a stunning achievement. No romantic twist or hot shoes or sassy set of “girlpower” quips are needed to make Nausicaä actual or interesting. She is a scientist, a diplomat, a warrior, an ascendant to the king’s throne, and a young girl; she does not need to be everything she is and sexy. In her desires, her loves, and her action within and upon the world, Nausicaä is, miraculously, a person. She is not perfect, but her striking fearlessness and freedom to love, which is her greatest power, are allowed to emerge, not from a gimmicky and insecure play on her gender, but from charity, self-knowledge and humility. In her prophetic service to her people in the Valley of the Wind, she is free to stand for them in the position of Christ. This perspective is the perfect opposite of the pornographic: it normalizes the free agency of a female human, and makes us all free to enjoy the Image of Christ in her.

Our prayer should be that kids in the church’s care would learn to think, feel, and instinctively act from within a rich imaginative matrix, forming sets of habits which increasingly reject the cynicism, bordeom, sentimentality, and pornographic distortion in the storytelling media that surround them. Let’s help them instead increasingly cling to the strange beauty of the true by exposing them to the ring of reality in what’s unfamiliar. Jumpstart them with a little Miyazaki. And who knows? They might just start enjoying scripture a little more, too, if we let them.

Amber Noel received her M.Div. from Duke University in 2012, after some additional graduate coursework in theology and literature at Lee University (Cleveland, TN).  She has remained in Durham, NC to explore vocations in pastoral, artistic, and academic fields. She currently works as a writer, youth minister, and an administrative assistant for Duke Initiatives in Theology and the Arts. But more importantly, she has good people and animals around who stubbornly insist on being her friends.

Image used under fair use for purposes of comment.