‘All the world’s a stage,
And all the men and women merely players;
They have their exits and their entrances,
And one man in his time plays many parts,
His acts being seven ages.’ [1]

The framing of life in terms of the theater is perhaps most famously articulated in Shakespeare’s As You Like It. The curtain of the world stage has been drawn for millennia and we all enter the great play in media res, performing our unique roles in the drama of human history.

That life is a drama played out on the world stage is a powerful and enduring metaphor. Hans Urs von Balthasar, the twentieth-century Catholic theologian and grandfather of theodramatic scholarship, goes so far as saying that in philosophy, the idea of the world stage is ‘the one abiding metaphor, attracting to itself all the ultimate intimations concerning the meaning and structure of existence.’ [2] Perhaps a case could be made for this but even if not, the dramatic metaphor has proven to be an incredibly fruitful way of conceptualising life and how one is to live it.

This is especially true of theology.

I want to highlight one of the benefits of employing the metaphor of drama in theological discourse. More specifically, the budding theological subfield of theodramatic (or theatrical) theology offers a particularly dynamic way of imagining the connection of doctrine and discipleship.

To understand why this is the case, let us first take a brief look at metaphor – both what it is and why it matters. 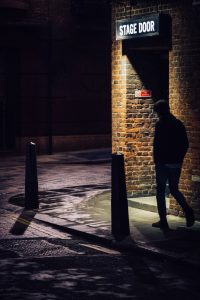 So, what is metaphor? In her landmark study Metaphor and Religious Language, Janet Martin Soskice provides deceptively simple working definition of metaphor. Metaphor is ‘that figure of speech whereby we speak about one thing in terms which are seen to be suggestive of another.’ [3] Metaphors are not ornamental tropes used, most benignly, as colorful decorations or, most malevolently, as modes of deception from truthful discourse. [4] As a matter of fact, metaphor is pervasively baked into the phenomenon of human language. This is true whether one is speaking about pedestrian, concrete things like the legs of a table or more profound, supersensible things like the Eternal God.

In realizing its inevitability and necessity, we have already begun to see why metaphor is so important. Let us now focus our attention on unpacking its significance. Put simply, metaphor matters because it exerts a powerful influence over how we think and act. When we employ metaphor, whatever we speak about is framed in a particular way. This framing is not accidental but substantially impacts the way we understand and relate to the thing about which we speak. The metaphor influences our thinking and acting because we fit the thing about which we speak into a particular paradigm.

Here is an example that will bring clarity to metaphor’s power. In 2011, two psychologists from Stanford University published a study on the influence metaphors have over how people conceptualise and then attempt to fix societal problems like crime. In their experiments, crime was spoken about using two different metaphors: crime is a beast and crime is a virus. When framed as a ‘beast preying on a city,’ nearly 75 percent of the participants proposed solving the crime problem through law enforcement and punishment rather than social reform. When crime was framed as a ‘virus infecting a city’ only 56 percent suggested law enforcement and punishment. [5]

How exactly does metaphor do this? According to the researchers, metaphors invite conceptual analogies that ‘appear to instantiate frame-consistent knowledge structures and invite structurally consistent inferences.’ [7] In other words, the metaphor suggests a web of associations that shapes how we think and act with regards to the thing about which we speak.

Surprisingly, the researchers discovered that the metaphors flew under the radar – the participants did not recognize them as influential in their decision-making process for solving the crime problem. The power of metaphor lies in its influence not so much over our intellect but over our imagination.

By imagination I do not mean fictional invention or fanciful make-believe. James K.A. Smith provides a helpful description of this faculty. The imagination is the name of ‘a kind of faculty by which we navigate and make sense of our world, but in ways and on a register that flies below the radar of conscious reflection.’ [8] Our imagination enables us to map out and maneuver our way through the world at a precognitive level. Metaphor is important because it structures and therefore wields the power to define reality. [9]

Given the discussion about metaphor, it should be clear that the metaphors we employ for theological discourse really matter: they shape how we think and act vis-à-vis God. This brings us to the discussion of the metaphor of drama.

The first theologian to incorporate drama into Christian theology in a serious and sustained way was Hans Urs von Balthasar. In the five volumes of the Theo-Drama: Theological Dramatic Theory, the central panel of his systematic trilogy, Balthasar develops his theodramatic theology focusing on the dialogical action of God and human beings.

Balthasar makes the case that one cannot know who God is apart from knowing what God does. The Trinitarian God bursts the bounds of our grammar but it is fair to say God is more a verb than a noun. God is, in a sense, dramatic and therefore, Balthasar suggests that our existence and revelation are derivatively dramatic. [10] Consequently, he argues that the best metaphor for grasping the content of the Scriptures is via dramatic categories.

The metaphor of drama in theology naturally lends itself to illuminating how we are to think about and act in response to God’s activity in the world. Christian theology is not merely an academic discipline. Properly speaking, it ought to always be oriented towards the obedience of faith. According to the seventeenth-century Puritan philosopher William Ames, ‘theology is the doctrine or teaching of living to God.’ [11] Drama is a particularly fruitful metaphor for the theological enterprise because it seamlessly integrates Christian doctrine and Christian discipleship.

We get a sense of the energy of the metaphor when we consider drama’s etymology. Drama derives from the Greek draō meaning ‘to do, act, or accomplish.’ Drama connects doctrine and discipleship because it provides a particularly dynamic way of imagining Christian theology and the Christian life in terms of performing one’s unique role as a key member of the dramatis personae in the drama of redemption. Theology is inherently dramatic. It is less about a theoretical understanding and more about a theatrical demonstration – it is to be acted out. [12]

In the Drama of Doctrine, Kevin Vanhoozer writes that ‘there is no more urgent task in the church than to demonstrate faith’s understanding by living truthfully with others before the world.’ [13] Theodramatic theology takes this quite seriously. By employing drama, theodramatic theology naturally connects doctrine and discipleship in such a way that orients us in the world as actors, participating in God’s drama of redemption. Employing the metaphor of drama, therefore, helps theology fulfill its vocation: enabling human beings to live to God.

As we enter into Holy Week, it is easy to fall into the patterns of remembrance, repentance, and expectation, leading up to the great…