Creating art and engaging in spiritual reflection are often solitary pursuits. Nevertheless, for the past five years, three American artists have assembled for an annual working residency that has sustained their artistic practice, deepened their friendship, and strengthened their faith. ‘Being with my colleagues immerses me in a time and space where my art and my faith are more fully integrated’, said Linda Ekstrom, a printmaker, creator of artists’ books and lecturer in art at the College of Creative Studies at the University of California, Santa Barbara. ‘Often I experience these as separate. But in the residency, they merge’, she added.

The artists work in diverse media. Ekstrom is joined by Marie Schoeff, whose core practices are drawing and printmaking. She has taught at Westmont College and Santa Barbara City College. Linda Foster works in glass and as a painter and printer, and she also taught at City College.

Through their interactions during graduate school, teaching together, and their involvement with a contemporary arts forum, the artists formed a friendship. Initially, they met as a spiritually minded group at one of their studios to talk about their work in progress, after which they would enter a time of discernment. The artists would share ideas and concerns, usually about art or teaching, but occasionally about family if a current situation was especially relevant. This was followed by a time of silent prayer and response to each other, trying to answer the question: ‘Where is God in this?’

The annual residency grew out of that experience. Foster moved to Kansas, and Ekstrom and Schoeff tried to communicate with her about their work via video calls, but that method of communication was unsatisfying. Finally, Ekstrom said, they realized they wanted to go somewhere and simply make art. Schoeff explained that they considered applying for formal residencies, but the process was not worth the effort. Soon they discovered that they were able to use the art studios on the Westmont campus during the summer when classes are on hiatus. The first year, they stayed at a nearby Episcopal Benedictine monastery in order to enter the discipline of daily prayer, but the drive between the college and the monastery interrupted the rhythm of their working day, so they decided to stay on the lushly landscaped Westmont campus, nestled in the hills above Santa Barbara, to work, eat, reflect, and sleep. 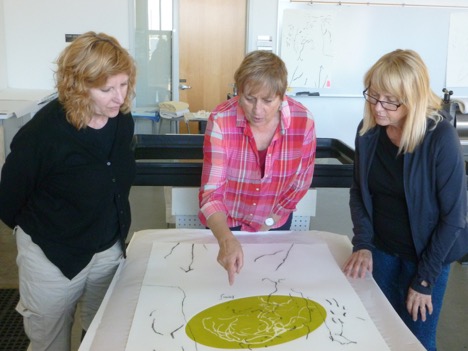 Even though all three artists have home studios, they soon realized that the physical act of going on retreat offered numerous benefits. ‘Having a break away from your day-to-day life is so wonderful’, Schoeff said. Ekstrom likened the experience to being in graduate school. ‘You have a community’, she said, where members find accountability as they participate in show-and-tell every day. Foster appreciates the sense of camaraderie: ‘You hit a snag [in your art] and you have two people who care about you and your work to help you’, she said. This esprit de corps, she explained, is valuable because artists typically work in isolation. An added benefit of working on a college campus, Schoeff pointed out, is ‘the art faculty love having us here because it inspires them’.

In addition to the exchanges between Ekstrom, Schoeff, and herself, Foster notices how casual interactions with faculty and artists on campus provide a ‘built-in audience’ for their work: ‘I’m forced to think, clarify, make, think, clarify, make’. This feedback loop means the conversation from one iteration of an artwork to the next ‘makes more sense’, she said. ‘Just watching someone look at what you’ve made is instructive, invaluable’.

To weave a spiritual dimension throughout the periods of intense art-making, the three women meet outdoors after sunrise and use a Celtic version of morning prayer, taking turns as leader and reading the texts responsively. They were excited to find that, coincidentally, this particular set of prayers makes several references to artists and craftspeople. But being the tinkerers that they are, they reworked the text, changing some of the language to make it more inclusive and modifying the line breaks to make the prayers more readable. In the creative spirit of the residency, they transformed their pages – which had been annotated photocopies – into handmade books for their own use.

Foster observed that though there are different spiritual traditions among them, they borrow and exchange ideas freely. ‘All of us work from our faith. The art-making springs from what we believe and our search for what we believe – the meaning’, she said.

Entering a daily rhythm allows contemplation to flow into creation. ‘We begin with prayer, and that prayer extends into our studio work’, Ekstrom explained. ‘Then, with the day open for nothing but art-making, something more deeply felt and truer is allowed to occur’. Foster is of the same mind: ‘Because we collectively begin the day as an offering, I sense that God honors that intention and hovers close in the studio. Not that there isn’t struggle and doubt, failed prints and dead ends. But I do sense that the morning offering carries through to the work and our interactions with each other and the guests that walk through’.

During their recent residency, Schoeff worked on a series of 28-by-39-inch intaglio prints. She selected images drawn from nature and an image of her daughter from her sketchbooks and enlarged them nearly 300 percent. The marks were drypoint etched into Plexiglas with a soldering iron, and the images feature relief-printed green circles, ovals, and semi-circles which echo the green that suggests ordinary time in the liturgical calendar. The lines became more abstract in the process of enlarging them, making them looser and more dynamic. ‘I’m interested in the marks’, Schoeff said. ‘My question is, can I take little bits of the whole and can they be as beautiful as the whole?’ She described how answering that question was like a process similar to lectio divina: ‘I’m reading nature and listening for what calls out. I’m using visual marks almost like text’, she explained. 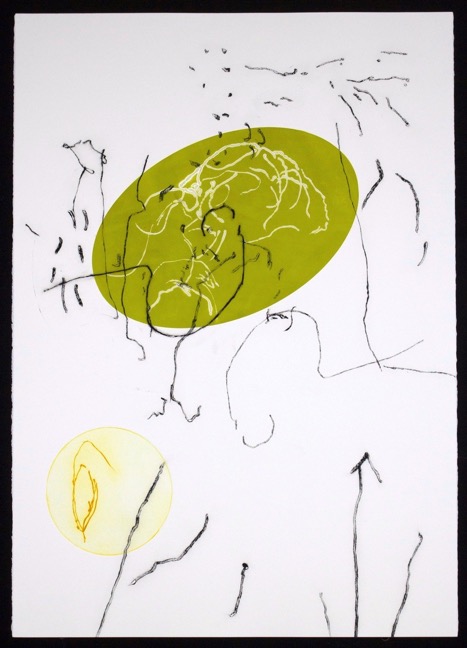 Ekstrom and Foster use actual text extensively in their art. One piece Ekstrom worked on during the recent residency was an artist’s book inspired by Gaston Bachelard’s Poetics of Space. Ekstrom’s book is assembled from handmade abaca and Japanese mitsumata papers, painted vellum, and Belgian cotton. By using a template based on the arrangement of the words ‘house’ and ‘universe’ throughout one of Bachelard’s chapters, she traced constellations from the initial H’s and U’s found in those words. ‘I am interested in opposing states such as immanence and transcendence or mortality and immortality’, Ekstrom explained. ‘“House” and “universe” is one of those in that “house” is closed, finite and intimate. “Universe” is vast, immense and without boundaries. I see these as issues of space, and in the artists’ book I play with the space of the literal page, the space we enter when we read, the letter patterns I used to create constellations’. 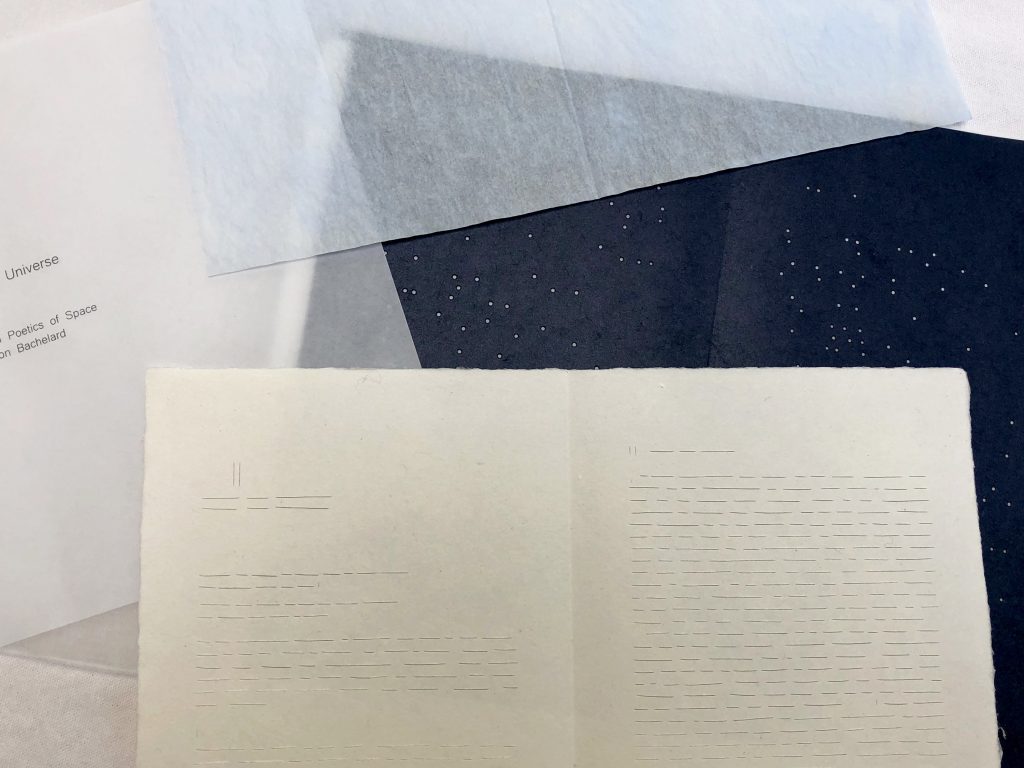 In addition, from the same book by Bachelard, Ekstrom wrote passages of the text along with her reflections onto vellum. She then rolled the vellum into scrolls and twisted them into six ropes. Finally, she gathered the ropes and fastened them with twine to form one strand nearly 12 feet long, which, Ekstrom believes, is a way of ‘twisting and condensing the text and then holding it all together to form a new way of reading’, but also representing a link to another world. ‘I have thought of ropes like an axis mundi, the way ladders, mountains, spires, trees, are thought of symbolically – reaching from our world to the world beyond . . . I think ropes are also one of these symbols’, she said. 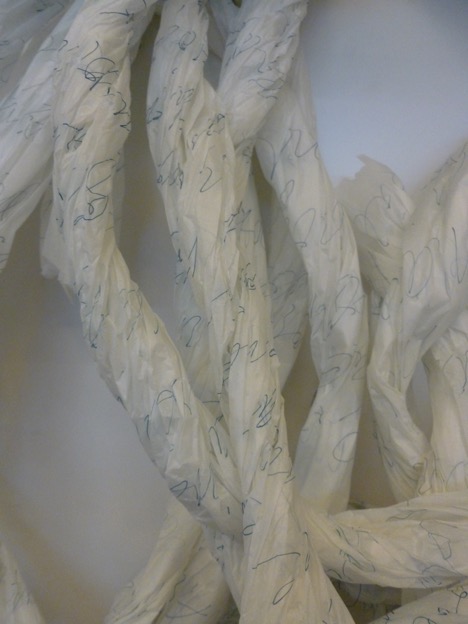 Foster’s project was the completion of Life in Shadow, a book made of five 9-by-12-inch glass pages etched with the word ‘life’ in 112 languages. Articulated with clear acrylic hinges, the book is designed to stand upright, and as the pages are expanded, rays of light illuminate the etched characters and create shadows on nearby surfaces. ‘It’s a timekeeper’, Foster explained, noting that, as the sun casts shadows from the pages, viewers can follow the seasons or the weather. The piece lends itself to different ‘reads’, as Foster calls them. For example, someone could examine the manner in which the etching catches the light, while another could contemplate the shadows cast by the etching. ‘A friend referred to it as an illuminated manuscript’, Foster noted.

‘The languages and symbols in the book act as surrogates for the world’s peoples. The letterforms, marvellous in their unfamiliarity with beautifully formed curves and extensions, offer patterns and nuances to discover, not unlike the cultures from which they originate’, Foster wrote in her description of the piece. She hired a monument company to etch the text onto the glass with a professional-grade laser which reproduced her design. A friend built a wooden box to house the book, which has been acquired by the Department of Special Research Collections at the University of California, Santa Barbara, Library. 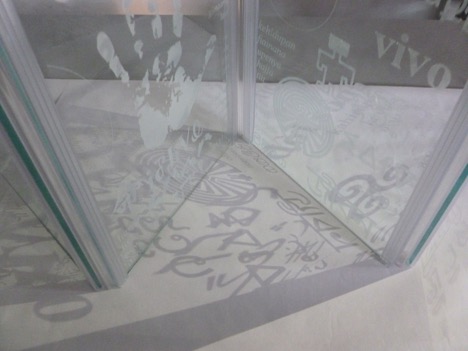 As they thoughtfully spend time on their art during the week, the artists intend to establish a pattern for the rest of the year. ‘With each residency I hope for a restructuring of my time so that my priority is on the studio work while the other parts of my day revolve around what best suits that pursuit’, Schoeff said. ‘The camaraderie that is created is also an essential element. The discussions we have about our work, what we are reading and what art we admire, make for a rich time’, she said. Most of all, the residency helps them reconcile the aspects of their lives as artists which, Schoeff observed, include ‘creative exploration and art-making, study and reflection, and community’. As for the implications of the structured time away, Schoeff expressed her desire to live holistically: ‘I strive to carry this pattern of focus into my life after leaving the residency’.

Ekstrom echoes that sentiment about the way the residency recalibrates her work habits. ‘This residency allows for me to have a space where I can focus on the making of art and do so within a routine that reinforces and reminds me of the reason I am doing what I do’, she said. ‘It supports my understanding of art as a gift or charism. It allows me to experience the ritual dimensions of art practice more fully as carried on throughout the daily cycle’.

Foster sums up the residency experience as a continuum: ‘My personal faith grows each summer, both from the repeating of the liturgy each morning and the making of the work. In a real sense, there is no difference. The two are intertwined in the same sense that all belongs to the Maker’.