As the days of autumn quickly approach and the warmth of summer rays dissolves to become the constituent parts of fond and fading memories, it is with great pleasure that we here at Transpositions return from our summer sabbatical and reflect upon the various and sundry ways in which theology and imagination express their convergence through a divergence of artistic mediums.

Similar to the steady and often indolent transitioning of the seasons, the flux of our editorial team continues the transitory ebb and flow found within academia. And so it is that my former Co-Editor and colleague, Denny Kinlaw, has departed from our midst and moved on to the faculty of Houston Baptist University, where he will be teaching literature and its engagement with theology. Whilst his absence is certainly to our detriment, we are delighted for the ways in which Denny will enhance this academic institution and the students whom he will guide.

Likewise, Allie Thomas will be shifting toward overseeing our Social Media communication, whilst Kimberley Anderson will be taking her position as our new Reviews Editor. For my own part, I will continue to stand on the shoulders of the editorial giants that have gone before me and pursue contributions that move this conversation further into the depths of theological and aesthetic understanding.

And yet, within the transient waters of change, certain anchor points remain that stabilize the mission and endeavour of our thinking and writing. Sometimes looking to the foundations of the past is the best path towards directing initiatives in the future. 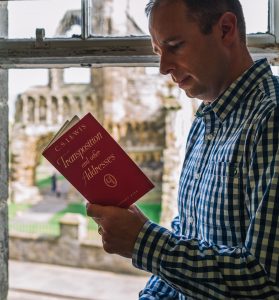 The name of our online journal, Transpositions, takes its appellation from C.S. Lewis’s sermon of the same name. At one point in this sermon, Lewis engages the imagination of his readers by constructing a poignant fable concerning a woman who is thrown into a dungeon and subsequently bears a son. As the son grows up within the damp walls of this prison, his only vision of the outside world is through a high window, revealing a small patch of sky. His mother attempts to sketch in pencil what mountains, rivers, fields and waves on a beach are like, only to later realise that her son has come to believe that the outside world consists of these pencil lines. As Lewis concedes, the boy does not realize that the lines were merely a transposition of something that no lines could ever achieve, a reproduction of the higher realities encountered in lower mediums. Whilst he may come to believe that the absence of these lines renders the real world less visible than his mother’s picture, in reality ‘it lacks lines because it is incomparably more visible.’ [1] (emphasis added)

Following in this tradition, the theological musings of our writers and reviewers will continue to move further on and further up into the realms of imagination to discover these points of divine contact within the natural and aesthetic worlds. Points of contact that are not mere ends in themselves, but rather point to a theological understanding beyond words, pallets, images and musical notes.

It is this engagement with culture and the arts that Transpositions will seek to foster in order to capture the splendour of vibrant colours that sometimes can only be expressed in lines of pencil. In the midst of our wanderings and etchings, we will be compelled to move further along this path by the hope that we will catch a further glimpse behind the veil that enshrouds our earthly perceptions. As Lewis comments further, ‘Our natural experiences (sensory, emotional, imaginative) are only like the drawing, like penciled lines on flat paper. If they vanish in the risen life, they will vanish only as pencil lines vanish from the real landscape; not as a candle flame that is put out but as a candle flame which becomes invisible because someone has pulled up the blind, thrown open the shutters, and let in the blaze of the risen sun.’ [2]

Thus, we will continue our commitment to provide original work from established and upcoming scholars—some familiar and some new—that seeks to be a more broad expression of the overall conversations taking place within the Institute for Theology, Imagination & the Arts (ITIA) at the University of St Andrews. A position that remains receptive and responsive to the constant flow of scholarship and aesthetic expression in which the Divine is expressed in all of its glorious splendour across the disciplines. As we continue in this endeavour, we hope that you will join us on this journey of discovery as we pursue the resplendent sun situated behind the shutters.