December 2011 found me in Munich. One evening I inched my way through the Christmas markets with their good humoured crowds, the gingerbread stars and Christmas trees, the locally carved wooden cribs, the Glühwein, the brass bands playing carols, the beautiful looking, but insipid, chocolate treats, the magnificent bells of the Cathedral summoning people to worship. I had walked out to Dachau in the afternoon, only a couple of miles outside the city, the camp in which Victor Frankl found himself, along with thousands of others, with its little church just outside the gates. It celebrated mass throughout the war without once protesting against what was happening a couple of hundred yards away. I found myself wondering whether there was an inner connection between the kitsch of the Christmas market and the fact that National Socialism began in Munich. Not, of course, a causal connection, but I wonder whether kitsch represents a kind of cultural dry rot which saps the ability to respond to injustice and evil. And not, of course, that kitsch was invented in Austria and southern Germany: the great ripe classic of kitsch is to be found in Germany, in Dresden, but it is not by a German. I refer to Raphael’s Sistine Madonna (below), with its cutesy cherubs, its pagan Madonna, Aryan child, and the papal tiara giving the ideological game away in the corner. 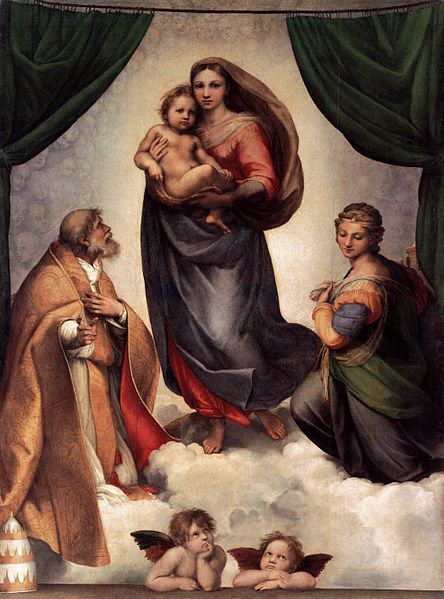 Raphael painted this in 1513-14, and Luther could not have known about it, but that a reformation was essential is shown by this picture alone. It is instructive to compare this picture, regarded by the Gemäldegalerie as the jewel in its crown, with those of Raphael’s older contemporary, Leonardo. In the two versions of the Virgin on the Rocks, both of which can be seen in the stunning exhibition in London, Leonardo manages to paint warmth, affection, love, and hope in the cosmic context which Raphael presumably also wanted to suggest, with his stagey clouds, without any hint of kitsch. It is instructive also to ask whether there is any suggestion of kitsch in the Hebrew bible or the Messianic writings – as far as I can see, there is none, nor can I think of any examples in the whole patristic period. I will not say that it begins with Raphael, but I suspect it is there or thereabouts.

In the celebrated discussion in The Unbearable Lightness of Being, Milan Kundera says two things about kitsch: first, that it represents ‘the absence of shit in the world’ – in other words, the refusal to be honest about pain and evil; second, that looking at kitsch two tears fall, one at the subject and the other which notes what a tender emotional being I am to be moved by this. Kitsch, we can say, is a particularly vicious version of emotivism. The Viennese architect Friedensreich Hundertwasser thought life without kitsch was unbearable, presumably on the grounds that ‘mankind cannot bear very much reality’. His context is a struggle against architectural modernism, and one can understand what he says if it is a protest against that particular tyranny, but we have to ask why there is no kitsch in the Christian Scriptures. It is not that the texts are shy of emotion: to the contrary. But throughout there is an insistence on seeing reality, seeing it steadily and seeing it whole. Kitsch ducks this insistence.

Judaism certainly knows kitsch (Chagall) but I wonder if Islam, Buddhism and Hinduism do. Is the flight from reality of kitsch characteristic of the People of the Book, in which reality is kept so squarely in view?  Kitsch is the Disney ‘Aw,shucks’ world which on the one hand makes every creature cute and lovable, funny and tear jerking, and on the other insists on a way of life which will destroy the planet and drops 4000 lb bombs on anyone who challenges its account of ‘freedom and democracy’. The emotional dishonesty of kitsch prevents us from facing our own fear and our own shadow. The account of the journey from Caesarea Philippi to Calvary in Mark’s gospel, by contrast, is a paradigm of what doing that involves, a journey without any false consolation.

Nothing is more remarkable, in the Messianic writings, than the fact that resurrection story never becomes simply a ‘happy ending’ but rather speaks of hope for God’s peace, justice and coming kingdom.  Christians are not called to be puritans, to deny laughter, tears and joy, but their Scriptures generate a structure of affect in which kitsch has no place. Kitsch, in fact, is one of Satan’s prime stratagems to undermine the gospel, to turn it from something which turns the world upside down to a cheap tinsel decoration which helps us feel ‘good about ourselves’ (one of the mantras of our contemporary culture) whilst allowing injustice to go unchecked. Hundertwasser may have been right that we will never have a world free of kitsch, but we could at least see to it that it does not become part of Christian DNA.

Tim Gorringe is Professor of Theology at the Universityof Exeter. His most recent books are on art (Earthly Visions: Yale 2011) and the built environment (The Common Good and the Global Emergency: CUP 2011). He is currently working on the Transition movement.