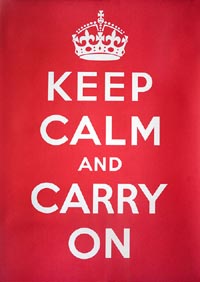 If you haven’t seen “Keep Calm and Carry On” or one of its variations over the past decade, you’ve missed a truly global phenomenon.[1] The propaganda poster, designed by the British Ministry of Information (MOI) in 1939, was distributed in preparation for an invasion, but never used. Two other posters in the 1939 series[2] attracted significant animosity from the press who deemed the kind of message they communicated — one of governmental authority — as inappropriate, in what was to become known as “The People’s War.” By the Blitz (September 1940) the message of “Keep Calm and Carry On” was itself clearly deemed unsuitable and most copies were likely pulped. By all rights, as a poster intended for a time and purpose in history, the design should have disappeared into obscurity. Copies of the trio of posters were placed in the Imperial War Museum and The National Archives at the end of the Second World War, but “Keep Calm and Carry On” was very much the poor relation in the trilogy.

It was the ‘rediscovery’ of the poster in 2000 by Barter Booksellers that gave us the twenty-first century story. Mary Manley of Barter Books felt that the poster evoked  “nostalgia for a certain British character, an outlook.”[3] Having checked permissions with The National Archives, they started selling reprints in 2001, with around 50,000 sold by 2007. As the recession started to bite in the UK in 2008, sales of the original design, with its distinctive typography and visual aesthetic, rocketed, whilst others subverted the slogan[4] and design[5]. In February 2009, a spate of stories hit the national press: we heard that Gordon Brown had it pinned up on his wall. Celebrities such as Katie Price, Rupert Grint and James May were spotted wearing the t-shirt. ‘Keep Calm and Carry On’ had become iconic, and, more significantly, an internet meme.[6] 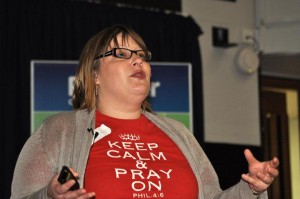 The word ‘propaganda’ itself was first used in the Sacra Congregatio de Propaganda Fide (1662), meaning ‘the spread of the Roman Catholic faith’.[7] It’s not inappropriate then that there are a significant number of Christianised versions of the slogan and/or design.[8] Intertextuality assumes that the meaning of one text is shaped through the lens of other texts. For Christians, our interpretation is likely to be shaped through our faith, and some of the strongest designs have clear biblical resonance.  “Keep Calm & Pray On” (pictured right), draws on Philippians 4:6:

Do not be anxious about anything, but in everything, by prayer and petition, with thanksgiving, present your requests to God. 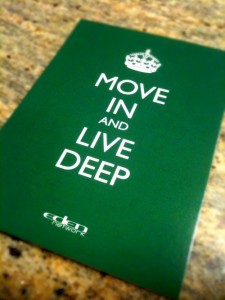 Eden Network, who live and work long-term on deprived estates, have produced a number of designs. “Move in and Live Deep” works very well with the design, but also reflects what they are doing in a tight slogan. In a design particularly appropriate for their team members, they also have “Here I am. Send Me” (Isaiah 6:8). 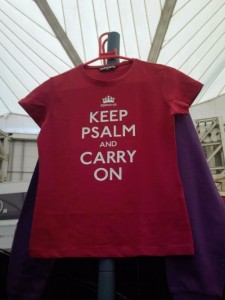 Being human, Christians produce the same questionable mix as everyone else, with some slogan variations working much better than others: “Keep Psalm and Carry On” is amusing, but could it be considered deeply meaningful? Tools such as http://www.keepcalm-o-matic.co.uk/ make it possible for anyone to produce a version of this design. Charlie Brooker has called for us to stop doing so,[11] but as traffic to my website demonstrates, there’s still an appetite — whilst the poster is still of interest, we can continue to parody the original design with well thought out slogans.

Dr Bex Lewis first mentioned Keep Calm and Carry On in her 1997 undergraduate dissertation. She completed her PhD in 2004, focusing upon British propaganda posters of the Second World War within a framework of Foucouldian discourse analysis. She has moved on from historical communications to become fully immersed in digital communications, as Director of ‘Digital Fingerprint’, managing The Big Bible Project for CODEC at the University of Durham, whilst also working for the University of Winchester as ‘Technology Enhanced Learning Fellow’ and Media Studies lecturer.

All images are from the author’s collection except the photo of the author which is used with permission from Premier Media.

[1] I have collected examples, which can be found on http://ww2poster.co.uk, my favourite of which is: http://ww2poster.co.uk/2009/05/keep-calm-and-fake-a-british-accent/
[2] “Your Courage, Your Cheerfulness, Your Resolution will Bring Us Victory” and “Freedom is in Peril, Defend it with all Your Might”
[3] Quoted in Walker, R. ‘Remixed Messages’, New York Times, 1st July 2009: http://www.nytimes.com/2009/07/05/magazine/05FOB-consumed-t.html
[4] For example ‘Panic Wildly and Run Away’ and ‘Get Excited and Make Things’
[5] The colour was changed, and the Crown often replaced with other icons.
[6] Many of these alternative designs have been tracked on my blog: http://ww2poster.co.uk
[7] O’Donnell, V., ‘What is Propaganda?’, in Jowett, G. and O’Donnell, V., (eds) Propaganda and Persuasion, 1999 (Third Edition), p.2.
[8] These have been collected on a Facebook page: http://j.mp/kccoChristian
[9] So do not worry about tomorrow; for tomorrow will care for itself. Each day has enough trouble of its own. (NIV)
[10] Be still, and know that I am God (NIV)
[11] http://www.guardian.co.uk/commentisfree/2012/jan/08/charlie-brooker-new-year