If you had told me a year ago that I would write a play and get to see it performed in London in front of a large audience, I would not have believed you.

But way having led onto way, on 17th June at 7:30 PM, I found myself coiffed and curled and waiting sheepishly with my mother, sister, and brother-in-law to go watch Javert Derailed, a one act play by yours truly. The hallway was buzzing with the muted shuffling of people as we waited for the austere doors to be opened. A surge of excitement welled up in my chest: I wonder what it will be like?

The thought struck me as amusing; I did write it after all. It’s a pretty surreal thing seeing something that has once only dwelt in your mind and imagination brought to life in front of hundreds of people.

It was performed as the final event for the London Encounter, a conference which aims to explore a philosophical question from many angles— cultural, artistic, scientific, etc. This years theme was “The Adventure of the Unexpected,” and sought to explore how modern man, so accustomed and desirous for control, ought to encounter the uncontrollable and unanticipated. 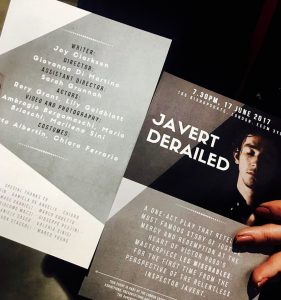 In the morning, Ard Louis, director of graduate studies in Theoretical Physics at Oxford University discussed the unexpected in the world of physics on a panel with previous Archbishop of Cantebury Rowan Williams and Mary Morgan, Professor of History and Philosophy of Economics at the London School of Economics. Other events included a multimedia, interactive exhibit at the lives of British Saints, and a presentation on the role of the unexpected in the maths and sciences.

Javert Derailed explored the theme of the unexpected in the well beloved story of Les Miserables by Victor Hugo. For those familiar with the narrative, the play takes place between Jean Valjean’s merciful release of Javert from the barricades, and Javert’s suicide. Valjean’s act of mercy— which mirrors the mercy he received from the Bishop— is the unexpected event which sends Javert into a crisis of identity. Will he let this unexpected stroke of grace lead him to an encounter with something greater than himself, or will he fall on the sword of his own self sufficiency?

The opportunity to write the play came as an adventure of the unexpected for me.

In the fall of 2016, I did a presentation on the theme of mercy in Les Miserables for the coursework in my masters program. And through a series of connections and meetings, I was told about this project. The bones for the play were all there: the story of Javert, the event of mercy, the choice to say “yes” or “no” to the unexpected. They needed someone to help put flesh on, and bring it to life. So working with my new found artistic partner, Lorenzo Rossi, I set to play-making.

I said yes to the unexpected adventure of writing a play.

Working in conversation with other creative minds, I began to imagine how this story could best be told, embodied, and enacted on stage. The process of composing the play was a mixture of experiment, collaboration, exasperation, and exhilaration. As I checked my phone for the time on June 17, I think I was most excited to see how the ideas had been brought to life through the skill of the director (Giovanna Di Martino, assisted by Sarah Grunnah), the actor (Rory Grant), the violinist (Lily Goldblatt), and the production team (Ambrogio Bergamaschi, Mario Brioschi, Marilena Sini, Marta Albertin, and Chiara Ferrario).

I was not disappointed.

The play opened with a sumptuous visual feast as an introductory film was played, consisting of images and clips of police units, riots, and predatory animals, overlaid with the description of Javert from the book. I was not involved in this portion of the production, but found the image driven attempt to describe Javert interesting.

Next, a violinist played out a haunting, achey tune. Throughout the play, this came to represent Javert’s inner turmoil, singing quietly as he pondered, shrieking urgently the closer he came to his final decision. I had not thought to include music, but I think the addition added an enlightening emotional scope to the play.

Truly remarkable was the actor, Rory Grant. He blew me away. It takes a real skill to hold an audience by oneself for an extended amount of time, but he most certainly did. While his youth did not match the stoic middle agedness of Javert in the book, Grant channeled the noble, unbendable nature of Javert. Somehow he managed to shape the arch of intensity to a perfect crescendo at the end, packed with emotional punch.

My favourite scene was the last: a dialogue between Javert and his own conscience, coming to terms with his life and need for mercy. It was a beautiful blend of acting, visual, musical, and verbal skill.

The final scene closed as the violin came to a sudden stop, Javert fired his pistol at the screen where his own mouth faces him speaking the words ‘Having ears you do not hear, and eyes you do not see, otherwise you could return and be healed.’ The lights went black, but the mouth of Javert was still visible. “But blessed are you. For you have eyes, and you have ears.”

A chill ran down my arm. Of course, I knew what would happen; I wrote the play. But I found myself moved by the ways in which other skilful hands and minds had breathed life into this powerful moment of choice, possible redemption, and tragedy.

Ruminating on the story of Javert for this year has changed the way I view the world. It is easy to think of Javert as the “bad guy,” the one who does not know how to be kind like you or me. But as dwelt in the world of Javert, I began to see that I am often not so different from him; I want things to be orderly, expected, controlled. But as Hugo so artfully tried to teach us, often, the moments of greatest delight and deepest redemption come from saying “yes” to the unexpected.

As I stepped out into the muggy, summer air of London, after a dozen hugs and handshakes, I could not be more glad to have said “yes” to my own adventure of unexpectedness.

[EDITOR’S NOTE: This week Karen McClain Kiefer reflects on the antiphon ‘O Root of Jesse’ and the icon The Tree of Jesse. Gustav Klimt’s…