While a scholarly investigation of art engages the imagination and intellect, a practical interaction with art employs the physical senses. More profoundly, art that is infused with spirituality can prompt the soul and the body to experience art at a greater depth. This exploration allows artists and viewers to make discoveries about what lies behind the works –motivations, beliefs, and techniques–and to realise what is going on in front of the work as they contemplate and react to it.

Members and friends of the ITIA community shared their artwork in ‘The World “behind” and “in front of” the Work,’ an exhibition held for two weeks in June. The title of the exhibition was drawn from the writings of Richard Viladesau, who suggests that attitudes and ways of seeing enter an artist’s work and ‘contain clues as to the ultimate concerns of the artist and/or his age’ (1), and Paul Ricoeur, who argues that works of art can explore and open up new ways of being in the world (2).

Presented in the Upstairs Gallery at J & G Innes in St Andrews, the exhibition featured works by Andrew Baker, Rebekah Dyer, Sherrill Keefe, Carol Marples, and Scott McDonald, including prints, photographs, sculpture, drawings, paintings, and mixed media pieces. Several of the artists are in the early stages of their artistic endeavours, so the opportunity to exhibit was a timely confirmation of their emerging talent.

The artists described their work in terms of the theme – discussing the inspiration and process behind the work and anticipating the world in which it would be situated.

Baker, an MLitt student researching ephemeral ecclesiastical architecture, exhibited a print based on the Trinity and a mixed media assemblage, Broken to be Whole, which drew on imagery surrounding the Crucifixion and its meaning. Four frames held broken bread, torn cloth, a cracked wax seal, and split chains, exploring how the brokenness seen in the Last Supper, the veil of the Temple, the opened tomb of Christ, and the freeing of prisoners represents a journey to wholeness. 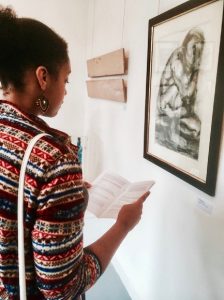 An artist and art instructor who works with the Centre for Academic, Professional and Organisational Development (CAPOD) at the University of St Andrews, Sherrill Keefe contributed Tidal Pool, a sculptural painting made from found objects, acrylic paint, and silverpoint, which she said ‘was created as a meditative tool to quiet one part of my mind while awakening another before moving on to more intensive projects.’ In addition, she exhibited Searching for it, a rendering of gouache, Conte, and pen that depicts an owl hovering above a field; Fixed, an ink drawing of geometric designs; and Unfinished Figure, which was finger-painted with graphite powder suspended in clear liquid.

In addition, Baker and Keefe collaborated to create a series of black and white photographs which emerged from accounts in Matthew 12 of the disciples picking grain on the Sabbath and the healing by Jesus of the man with a withered hand. They used hands from different people to underscore that a variety of characters are implicated in the stories of Scripture. 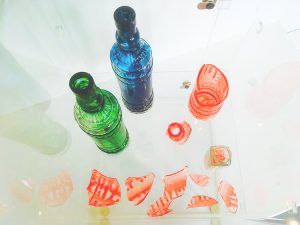 Rebekah Dyer, whose PhD thesis considers the complex role of fire in the theological and social imagination, created Ingress, in which she applied paint to the interiors of three glass bottles. Throughout the process, the bottles were tilted, turned, and inverted to allow the paint to form its own patterns and variations on the glass. This prompted her to observe how “without the shape and volume of the glass, the work would be formless” and to wonder “How far can the work be separated from the worlds which contain it?”

Carol Marples, a PhD student who is the course tutor for Art and Spirituality at the Leith School of Art, exhibited two graphite drawings of vessels. ‘I wanted to say through these drawings that the sacred can be found in the most ordinary and everyday things.’ Marples is the artist and creative director of the Soul Marks Trust, and her PhD thesis explores the use of visual arts and space in worship. 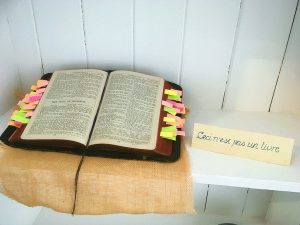 McDonald is also a PhD student, researching the theological meaning of superhero comics. He described how his mixed media piece, a Bible heavily marked with colored sticky-note tabs and titled The Treason of Metaphors, ‘highlighted the interplay of books-as-objects versus books-as-containers.’ He observed how ‘holy texts are inescapably bound up with physicality – their distribution relies upon processes of manufacture. Our complex relationship with objects creates questions of disposability, reproduction, imperfection, and monetary value.’

Through the artists’ interpretation of the theme, they were able to integrate their academic studies with their creativity. This symbiotic relationship had both immediate and long-term benefits. ‘The exhibition provided a platform by which I could share creative ideas with other students through preparing and exhibiting new artwork,’ Dyer said.

As a PhD student, most of my work is undertaken individually, so the exhibition was a welcome opportunity to come together with my peers to exchange ideas on a theme relevant to our studies. Moreover, the exhibition allowed me to find alternative means to explore and communicate theological and aesthetic ideas. I was able to engage practically with the intersection between theology and the arts through my own submission, and enjoy fresh dialogue with peers and exhibition visitors as a result of the works on display.

McDonald said, ‘Having the opportunity to display a work as an artist has boosted my own perception of my scholarly prowess – the chance to have a piece of work looked at critically by others in a setting which is non-academic but still intellectual has been a marvellous one. I feel energised for my continued studies as a result.’

Baker explained how participating in the exhibition mirrored certain aspects of postgraduate life. ‘It allowed me to articulate how the theories learned in my programme are reflected in my art. Likewise, it helped my development as an artist by forcing me to meet deadlines and explain my ideas to others – much like being a postgraduate student. I found the reciprocal relationship between the theoretical and the practical to be very helpful.’

The exhibition carried forward the vision of the previous ITIA exhibition in 2014, and in this way, said Marples, it ‘recognized the importance of the artistic, practical work created by students, which feeds into and complements their academic studies and shows that the two are entwined. The exhibition acknowledged my experience as an artist alongside my academic work. There is often little space for the two to come together, but this exhibition begins to create this space. It also opens the possibility of creating community and discussion that relates practice to academia.’

As one outside artist, reflecting on the theme of the exhibition, said, ‘It’s the ex- in exhibition that is so important – getting the work out there before the public.’ The artists’ interpretation of the world behind and in front of the work is evidence that such a phenomenon was realized.

A virtual gallery of the exhibition can be found on the TheoArtistry website at http://theoartistry.org/projects/itia-art-exhibition-2017/.