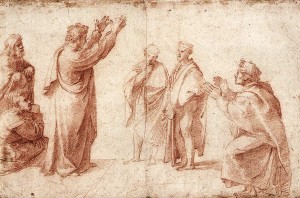 The content of Christian apologetics is constantly expanding and changing along with culture.  One might think that, at the very least, we can all agree that apologetics is a matter of defending Christianity by offering reasons for believing in it.   A simple definition like this may be helpful, but it masks the complexity and fecundity of “reasons” that may be offered in support of the Christian faith.  This symposium explores the role that the imagination plays in developing, exploring and presenting these “reasons,” and the way that the products of our imaginations, in particular the arts, can be brought to bear upon the task of apologetics.

A whole host of questions present themselves when we begin to think about the relationship between the imagination and apologetics.  Does the imagination “merely” make our reasons for believing persuasive and appealing?  Or is the imagination an essential partner in the pursuit of truth?  Is apologetics a mental exercise or an embodied practice? Can cultural forms apart from scripture shed light upon or hide the truth of the gospel?  Are there any biblical models for an imaginative apologetics?

Next week (27th – 31st of May) Transpositions hosts the Imaginative Apologetics Symposium.  Dialoguing with a wide range of sources from the ancient (e.g. Plato and Ecclesiastes) to the new (e.g. C. S. Lewis and The Legend of Zelda), we will explore these questions and more.  We have an exciting line up of contributors:

Monday (27 May): ‘The Apotheosis of the Hedgerow: Apologetics and Beauty in Contemporary Art’ by Andrew Davison, tutor in doctrine at Westcott House, one of the Church of England’s two theological colleges in Cambridge, UK, and an affiliated lecturer in the University of Cambridge’s Faculty of Divinity. His publications include For the Parish: A Critique of Fresh Expressions (SCM Press, 2010), with Alison Milbank, and the edited collection Imaginative Apologetics: Theology, Philosophy and the Catholic Tradition (SCM Press, 2011, published in 2012 in the USA by Baker Academic).

Tuesday (28 May): “Plato and Imaginative Apologetics” by David K. Naugle, chair and professor of philosophy at Dallas Baptist University, is author of Worldview: The History of a Concept (Eerdmans 2002); Reordered Love, Reordered Lives: Learning the Deep Meaning of Happiness (Eerdmans 2008); and Philosophy: A Student’s Guide (Crossway 2012).  Learn more here.

Wednesday (29 May): “Gospel through Shared Experience” by Christopher R. Brewer.  Brewer is pursuing a PhD with David Brown and he is exploring the possibility of an imaginative natural theology.  Along these lines, he is the founder and director of  gospel through shared experience as well as the editor and publisher of Art that Tells the Story.

Thursday (30 May): “From Hyrule to Mass Effect: Video Games as a Conduit for Theological Interaction” by Jonathan L. Walls and Jerry L. Walls.  Jonathan is the editor of The Legend of Zelda and Theology (Gray Matter Books, 2011), a collection of essays for academics and pop-culture loving gamers. He currently resides in Los Angeles, where he working to get his first feature film as writer/director made. Jerry is Professor of Philosophy at Houston Baptist University.  Among his other forays into pop culture are The Chronicles of Narnia and Philosophy (co-edited with Gregory Bassham) and Basketball and Philosophy (co-edited with Gregory Bassham).

Friday (31 May): “The Myth Made Fact in the Local Congregation” by Louis Markos. Markos (www.loumarkos.com), Professor in English and Scholar in Residence at Houston Baptist University, holds the Robert H. Ray Chair in Humanities; his books include Lewis Agonistes: How C.S. Lewis Can Train Us to Wrestle with the Modern and Postmodern World, From Achilles to Christ: Why Christians Should Read the Pagan Classics, Apologetics for the 21st Century, Restoring Beauty, Literature: A Student’s Guide, and On the Shoulders of Hobbits: The Road to Virtue with Tolkien and Lewis.

As my contribution to this discussion of apologetics, imagination and the arts, I want to offer an observation about a shift of mood among…