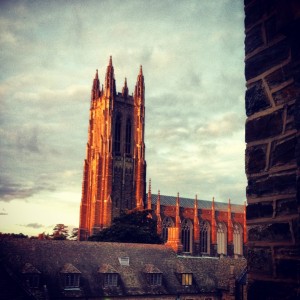 In “Philosophy as a Humanistic Discipline,” Bernard Williams makes two interesting, though seemingly opposed, points about the task of humanistic inquiry. These remarks, I think, might provide a helpful starting place for those of us thinking about the nature, aims, and problems associated with the “interdisciplinary” field that has come to be called theology and the arts or theology through the arts.

The basic question I want to raise is this: how are we to understand the discipline of theology within the context of interdisciplinary research?

Williams contends that for any field that understands itself as a “humanistic discipline, ‘discipline’ is supposed to imply discipline.” This means that in the process of speaking, reading, writing, and thinking within an academic field “there had better be something that counts as getting it right, or doing it right,” which takes the form of “offering arguments and expressing oneself clearly.”[1] In short, a discipline entails generally agreed upon standards of excellence.

But only a couple paragraphs later, Williams writes: “What I have to say … is an example of what I take philosophy to be, part of a more general attempt to make the best sense of our life, and so of our intellectual activities, in the situation in which we find ourselves.”[2]

For Williams, then, the task of philosophy is something with internal rules and boundaries (i.e., “getting it right”) and, at the same time, something concerned with “making sense” of one’s life in the most general sense. There is a tension, I think, between his endorsement of a seemingly absolute, generally agreed upon set of standards that make a discipline a discipline and his point that these disciplinary rules and boundaries are ultimately concerned with the absolutely local and thus contingent task of “making sense of life” in the place where “we find ourselves.”

Williams’ remarks here can easily be applied to any discipline that takes itself to be “humanistic” (e.g., visual art, music, literature, theology, history, etc.). Is there one thing that—in the case of all disciplines—makes each discipline a discipline? Is Williams’ definition able to help us grasp the uniqueness of particular fields of inquiry within the domain of the humanities? Or is his definition in the end overly vague? More to the point, how might we apply Williams’ framework to thinking about the issue of “interdisciplinary” enterprises like, say, theology and the arts?

“Interdisciplinarity” is all the rage these days, especially with respect to the field of theology. And I admit I have some anxieties about maintaining the integrity of the discipline, even though I often get the feeling I can do no better than to define it along the lines of Williams’ definition outlined above.

I worry that as theology gets absorbed into these “interdisciplinary” academic models (models that, as Richard Moran has pointed out, are increasingly institutionally imposed from the top down) we will continue to lose sight of its essential tasks and objectives (whatever those may be!). That in focusing so keenly on making theology relevant to other disciplines, we risk ultimately communicating precious little and in the process becoming very confused about what it is we’re doing.

And so I find myself asking, what, then, is unique about theological inquiry vis-à-vis historical, philosophical, artistic, or political forms of academic investigation? As students of theology, how are we to think about the nature and task of our discipline as it undergoes metamorphosis (or mitosis?) through self-conscious interaction with other areas of humanistic and scientific inquiry? For those of us who are attempting to work across disciplinary boundaries, both within and outside the academy, I think this is an important issue to get clear on. And as the list of “theology and …” continues to grow, this is something we will all have to deal with sooner or later lest we hand the problem over to someone like the university administrator.

Tanner Capps is from Westminster, South Carolina (USA). He is a ThD student at Duke Divinity School working in the areas of theology and early modern studies.

There might not be any better way to describe Sophia than by articulating how the pursuit of, and encounter with, wisdom in thought and…