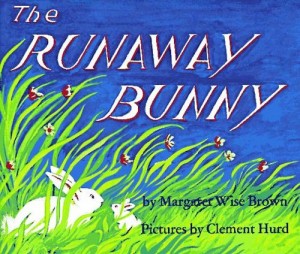 Margaret Wise Brown’s classic children’s story The Runaway Bunny1 (illustrated by Clement Hurd) has garnered scant scholarly attention since its publication in 1942, although academic interest in the book was briefly revived in the 1990s by the publication of Margaret Edson’s debut play Wit, in which the story is referred to as “a little allegory of the soul.”2 Unfortunately, Brown’s story has largely ceased to garner serious scholarly attention either from literary scholars or from theological commentators.

The book’s plot is deceptively simple: a young bunny imagines a series of bizarre escape attempts, but his mother persistently relates how she can subvert each attempt.   The little bunny is given no specific motive for wanting to depart from his home and his mother, and the initial ambiguity of conscious motive on the part of the protagonist is a jarring opening to the story.  Indeed, the reader is left to guess whether the bunny feels he has been subject to mistreatment, or whether he has simply fallen prey to an Augustinian restlessness of heart.  Immediately after the little bunny announces his decision to run away, the mother bunny states decisively, “I will run after you.  For you are my little bunny.”  Her abrupt insistence precipitates a series of imagined scenarios in which the little bunny exclaims that he will transform himself into a different entity, whether another kind of animal or an inanimate object.  Each time, the mother bunny indicates that she intends to transform herself into an entity or object associated with the little bunny’s preferred state, and thus the story is structured by the dialectical play of imagination and counter-imagination.

The theological implications of the plot are profound.  Martha Greene Eads favorably compares The Runaway Bunny to seventeenth century religious poetry, saying “the children’s book preaches the irresistible grace for which Donne’s poetry expresses a deep longing.”3  Indeed, a number of the mother bunny’s transformations evoke images from the Gospels, though past critics have not remarked on the specifically Christological nature of these images, nor have they explored the various ways in which the mother bunny’s transformations provide analogies to the Incarnation.

One potential objection to the identification of the mother bunny with Jesus is the obvious difference in gender.  However, the portrayal of a mother figure as Christ is not Brown’s own innovation; on the contrary, depictions of the motherly qualities of Christ are a significant if minor feature of the larger Christological tradition.  The best known example is the Showings of Julian of Norwich, in which Julian details the virtues of Christ that properly resemble a mother figure.  Such an identification of Christ with a female figure may seem strained, and yet Brown handles the analogy with subtle ingenuity, and the even tone of the dialogue softens the potentially controversial implications of the theological analogies. It is true that the book’s Christological imagery risks placing Brown’s story nearer to the margins of the Christian soteriology than to its center, and yet the book utilizes its quasi-orthodox imagery to portray a more broadly orthodox analogy to the Incarnation.

___________________
Steve Schuler holds a Ph.D. in English and is the father of three young children who show remarkable patience with his digressive critical remarks during story time.

Stephen Schuler holds a Ph.D. in English from Baylor University and is an assistant professor of English at the University of Mobile in Mobile, Alabama. He is currently working on a book about the theology of W. H. Auden.

Experience and the written word seem to indicate that separation is beneficial on various levels. Thus, in order to truly appreciate something, one must…