[Editor’s Note: Following on the success of last year’s series of MLitt essays at the Institute for Theology, Imagination and the Arts (ITIA), Rebekah Lamb​ reprises her orchestration of this initiative.  She introduces the launch of ‘Christian Doctrine and the Arts’, a series of markedly different takes on, or readings of, the relationship between Christianity and culture. Over the coming weeks, Transpositions will publish a wide array of essays, from an equally wide-ranging set of perspectives.]

In Heart of the World, Hans Urs von Balthasar meditates in an ‘intimate’ way on images central to Christian thought and belief, opening with a reflection on the significance of the cross.[1] The ‘very form of the cross’, he says, ‘extending out into the four winds, always told the ancient Church that the cross means solidarity: its outstretched arms would gladly embrace the universe’.[2]

Balthasar’s reflection on the nature and value of the cross is a helpful entry-point into the study of Christian doctrine in relation to the arts and vice versa. First, it acknowledges the position of Christian believers who seek to follow the via crucis (the way of the cross) in their daily lives. It helps explain why many Christians, seeking out the ‘solidarity’ afforded by the cross, accompany prayers and professions of creedal belief with a physical signing of the cross or who greet the Gospel proclamation by signing the cross on their foreheads, lips, and hearts — thereby declaring the unity of mind and body, of faith, reason and conscience. Second, it considers the cross’s capacity to serve as an inspiration or challenge to those seeking out life’s meaning. Finally, in proposing that the cross ‘means solidarity’, Balthasar invites us to consider how it can be a conversation starter for people of all faiths and none. In all this, of course, Balthasar holds that the paradox of the God-man, the Jesus of history and the Christ of God, stands at the centre of theological, philosophical, and aesthetic engagements with Christian doctrine — which birthed, among other things, the Christian, cruciform aesthetic.[3] 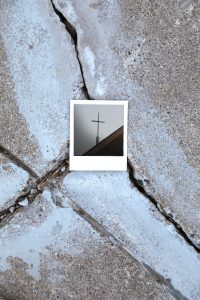 In his reflections on the doctrinal and aesthetic implications of the ‘shadow of the flesh’ (both Christ’s flesh and our own), Rowan Williams notes that the cross and the resurrection which follows after it supply history with a new narrative, a narrative based on the drama of the God-man’s entrance into, and transformation of, history. Drawing on the thought of Origen, Williams notes that Christian doctrine is not only a series of notional articles of belief but also an invitation into a new way of seeing and being in the world: ‘… as with the revelation of the God-given ordering of existence… [which involves] detachment, compassion, the cross, pilgrimage into a strange world of vision and liberty, adoption into sonship[,] Jesus is not merely a figure representing the new life; as Origen repeatedly insists, he is its source’.[4] This has captivated the imaginations of those standing within and outside of Christianity since the early Church, animating innovations in the arts and art criticism across historical periods.

Bearing this in mind, Leonard Boyle, OP notes that since the early Church, Christians discerned cruciform patterns everywhere; the cross ‘was, indeed, the axis of the universe itself, and drew everything to its centre’.[5] As the Anglo-Saxon poem, ‘The Dream of the Rood’, imagines it, the cross of Christ speaks to us about the mystery of divine life, of Christ’s gathering together and transformation of earth and heaven, finite and infinite, flesh and spirit. Addressing an anonymous dreamer, the rood (or cross) of Christ understands itself as a humble but key player in the drama of salvation history. And, in recalling in horror the trauma of the crucifixion, the rood triumphantly declares that, thanks to the resurrection, it has ‘outlasted the deeds of the baleful, / of painful sorrows’ and is now able to serve as a sign which draws ‘men across the earth, broad and wide/ and all this famous creation’.[6]

the cross and the resurrection which follows after it supply history with a new narrative, a narrative based on the drama of the God-man’s entrance into, and transformation of, history.

In this dream poem, the cross signifies the meeting point between life and death. That is to say, it announces that it will serve throughout history as a new image for philosophical, theological, and devotional thinking about life’s meaning and problems. Such readings of the cross are not unique to the medieval imagination, of course — although they particularly flowered during this period and have been especially picked up in twentieth-century returns to it.[7] For instance, in surveying the history of Christian art, Erich Pryzwara has commented that ‘the “scandal of the folly of the Cross” appears as the origin, measure, and defining goal of Christian art’.[8] And, especially meditating on St. John of the Cross (the Spanish mystic whose imagination seems as medieval as his spiritual journey seems Dantean), Edith Stein comments that the cross invites artists into a new kind of imaginative state, one in which detachment from egoism, through prayer or contemplation, allows an understanding of life’s mysteries. 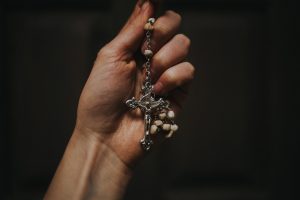 In addition, Stein proposes that the believing Christian who also happens to be an artist has a very particular calling to meditations of the cross. He or she is invited not only to think about the cross as historical or philosophical phenomenon. It is also meant to be understood as a model, a pattern, a path to follow. In this way, the artist moves way from the temptations of idol worship, entering into the way of prayer. [9] In this way, the artistic imagination is able to embrace a view of the world that transcends many of the limits that even the most gifted artist possesses, adopting a kind of cruciform aesthetic. Stein puts it this way:

The artistic temperament has its dangers, and not only if the artist fails to understand the sanctity of the calling. The danger is that the artist may rest satisfied with the creation of the image, as if no other demands were made of him. Our meaning will become especially clear in the case of the Cross. There is scarcely a believing artist who will never have felt the urge to represent Christ crucified or carrying his cross. But from the artist, too, the crucified Lord demands more than such an image. He asks of him as from every other man that he should follow him: that he should form himself, and let himself be formed, into the image of him who bore the Cross and died on it.[10]

In her observations, here, we find Stein offering us a contemplative assessment of the imagination, of the influence of prayer on the personality of the artist. In this way, she drives home the understanding that any engagement with Christian Doctrine and the Arts is ideally as interested in personal transformation as it is in classifications of knowledge or analytic assessments of value claims.

Stein’s view is not unique, per se; we see aspects of such claims proposed, elaborated upon or clarified throughout Church history. However, her reflection supplies the ‘personal touch’ that is often lacking in philosophical engagements with questions of belief (and their impact on culture and the arts). Ideally, every engagement with claims of belief and truth are assessed in a way which considers the consequences of such claims on lived experience, on the rhythms and routines of daily life and living.

Such an approach to the broad topic of ‘Christian Doctrine and the Arts’ is not unique to Christian thinkers. Rather, in some of the most penetrating writings on Christianity and culture (irrespective of the authors’ faith standpoint), we discern the careful attention to the impact of belief systems on not only thought but daily life.

For instance, as the professedly agnostic psychoanalyst Julia Kristeva writes in her interpretation of the cross and Hans Holbein the Younger’s (in)famous painting, The Body of the Dead Christ in the Tomb (1521–22): the fact of the cross stands as an historical and existential challenge to our understanding of identity, meaning, and suffering.[11] As importantly, she proposes that the Christian narrative, which deals with the death and resurrection of God, ‘offers imaginary support to the nonrepresentable catastrophic anguish distinctive of melancholy persons’, of those with a penchant for creative or analytic responses to life and living.[12]

Especially bearing Kristeva’s own philosophical approach to Christianity in mind, this special issue on ‘Christian Doctrine and the Arts’ for Transpositions comprises a series of markedly different takes on, or readings of, the relationship between Christianity and culture (broadly conceived). As with last year’s special issue on ‘Dostoevsky and the Doctrinal Imagination’, this special issue grows out of a series of assignments from my Post-Graduate module, Christian Doctrine and the Arts, which is a required class within the Theology and the Arts MLitt course at ITIA (The Institution of Theology, Imagination, and the Arts) at the School of Divinity here at St Andrews.

Over the coming weeks, you will have the opportunity to read a wide array of essays, from an equally wide-ranging set of perspectives. Despite the range, differences, and diversity of viewpoints, however, all of them share two commonalities: an abiding interest in the cross (which is at the heart of Christian aesthetics) and an attention to the influence of Christian doctrine on understandings of lived experience and daily life. We hope this special issue gives you the opportunity to think alongside us as we explore the timely and timeless value of the cross for aesthetics and, as Michel De Certeau put it, the ‘practice[s] of everyday life’.[13]

[4] Rowan Williams, The Wound of Knowledge: Christian Spirituality from the New Testament to St. John of the Cross (London: Darton, Longman and Todd, 2014), 28.

[6] ‘The Dream of the Rood’, https://oldenglishpoetry.camden.rutgers.edu/dream-of-the-rood.