A hush descends over the room. The silence is only interrupted by the whirring of a machine sending curled fingers of smoke onto the pale-pink illuminated stage. With hands clasped and eyes closed, the lines of closely huddled bodies sway in the silence, anticipating music that has yet to begin. A young man with a fastidiously unruly mop of hair stands in front of a mic, slumped, limp limbs folded awkwardly inward. Over the speakers, the synthetic sound of hands clapping to a waltz beat resounds, accompanied by a furtive, distorted pipe organ. Moving suddenly and awkwardly to the beat, the young man draws a tight breath and begins to sing. ‘I’ve got a God-shaped hole, it’s infected…’ [1]

Thus began “If I Believe You” by the 1975 as performed across the US and Europe in 2016. The song comes as a startling gear shift from the rest of the canon of the 1975, front-manned by Matty Healy, an outspoken atheist and member of the British Humanist Association. The song seems to fall into a tradition within popular music of songs written to Jesus by agnostic and/or atheist artists.

Contemporary and historic examples abound. The Velvet Underground’s ballad ‘Jesus’ (1969), Noah Gundersen’s ‘Jesus, Jesus’ (2009), Bon Iver’s ‘Heavenly Father’ (2014), and numerous others reveal a small but definite category of songs written to Jesus by self-proclaimed unreligious artists. In an increasingly pluralistic pop culture, references to God and religion are not so uncommon, but these songs are couched in different terms; they do not talk about Jesus, but to Him.

In popular culture, musicians seem to serve the re-enchantment of the postmodern consciousness. John McClure writes that, ‘The mantle of the artist as prophetic mediator of truth in a post-Enlightenment world has been placed… onto the shoulders of the popular songwriter,’ a mantle which many artists take up enthusiastically. [2] While pop music as an industry is overwhelmingly secular and capitalistic, its songwriters are invested with a kind of spiritual impetus. The songwriter is the emblematic postmodern-meaning seeker, rejecting authority and seeking truth for the individual truth within.

How striking, then, when a writer turns outward to address the unavoidably religious person of Jesus. 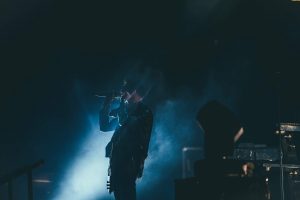 Concluding his essay cataloguing references to Jesus in pop culture, Clanton asserts that, ‘Basically, I think Jesus functions as an empty shell into which various meanings or significations can be poured.’ [3] This seems unsatisfactory. It would be nonsensical to say that Mohammed or the Pope served as an ‘empty shell’ into which one can pour meanings, because these are not vague mythical figures, but persons with recorded words that may disagree with any particular meaning the artist might wish to pour into them. In these songs, Jesus is not a symbol or a character, but a recipient. Meaning is not poured into Jesus, but addressed to Him in the form of statements, questions, and requests.

Perhaps a better way to conceive of these sorts of songs is through the concept of Negative Transcendence, as discussed by Clive Marsh and Vaughan Roberts. Marsh and Roberts write that in songs addressed to Jesus, ‘God appears only as the Absent One… it as a yearning that God’s presence is mediated and transcendence is represented.’ [4] As the songwriter addresses Jesus, an imagined other is summoned in the imagination of the listener, creating a sense of silent presence and a desire for an unheard answer.

These elements of desired presence, expected response, and negative transcendence certainly shape “If I Believe You.” A careful listening of this song reveals both what Healy seeks in addressing this song to Jesus, and whether or not he finds it.

The whole song is predicated on an experience of discomfort and pain, which Healy seeks to relieve. The opening line makes this abundantly clear: ‘I’ve got a God-shaped hole, it’s infected.’ This visceral image refers to the idea of a God-Shaped Vacuum, often attributed to Pascal. Healy takes the idea of a God-shaped hole, making it not a vacuum but a wound. Building upon this description of pain, he describes his fear of isolation and madness by saying that he is ‘petrified of being alone.’ Healy uses this exact phrase in an interview describing the loneliness and surprising emptiness he felt after the band’s first large tour, which resulted in his debilitating addiction to cocaine. [5] Before even the chorus, the driving desire of the song begins to take shape.

The first line of the chorus, ‘If I believe you, will that make it stop’, reveals what Healy has turned to Jesus to seek: escape. Healy does not seem to seek truth, rescue, or even change; he simply wants the pain to stop. He seems to think that somehow a miraculous encounter with Jesus will prove effective in this endeavor. Healy’s lyrics resonate with March and Robert’s assertion that the use of Negative Transcendence in songwriting often stems from ‘The desire to be taken out of oneself’ as ‘a quest for otherness, a response to the limitations of self-containedness.’ [6] In desperation and loneliness, Healy addresses this desire by using the figurative absence of Jesus as a portal to transcendence. McClure writes that these sorts of songs give ‘voice to the God-shaped hole between performer and audience.’ [7] An appropriate description given Healy’s portrayal of his own infected God-shaped hole.

Moreover, Healy seeks this otherness through the use of gospel music as a tool for engendering emotional experience. In interviews, he speaks emphatically about the impact gospel music has had on him, ‘If I was five years old, and my dad said, “That’s God, that is,” I’d believe in God to this day.’ [8] This significant statement begs the question: what was it about gospel music that Healy found so compelling?

The way Healy interacts with the gospel elements of the song suggests that he values it for the experience it can conjure. The musical production of the song is marked by a use and augmentation of gospel tropes and traditions. Healy seems to find the sense of otherness that McClure speaks of in the soaring emotional experience of gospel music.

The chorus ends with the line, ‘I’m asking you Jesus, show yourself.’ There is an air of challenge, doubt, and haughtiness in this bold statement. Healy becomes the challenger, daring Jesus to respond. There is a sense in which Healy has an expectation of control; in Healy’s mind, if Jesus exists, He ought to respond. In the same way Healy has manipulated the gospel elements and ideas of Pascal, he expects to have some measure of power over Jesus.

Moving into the second verse, Healy becomes annoyed and cynical about Jesus being an escape from pain, and begins to speak about him in terms of drug use. Healy sings, ‘I thought I met you once or twice, but that was just because the dabs were nice’, implying that he had a psychotropic vision of Jesus but attributes the meaning to drugs. Healy begins to see religion as analogous with drug use by finishing the verse with the line, ‘If you don’t wanna go to hell, you better start selling this.’ Matty approaches Jesus as a means of self-medication and is disappointed with the results. This analogy resonates further with his use of Gospel elements; he uses them to manipulate and evoke feelings to induce the listener to a trance-like state. 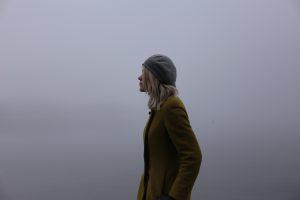 I do not, however, think the song is an outright rejection of Jesus. In an interview, Healy describes this song as a chronicle of his ‘envy of the faithful’. [9] He says, ‘I don’t have a faith or a religious background and I think I envy that in people, people who have salvation.’ [10] Healy does not belittle the experience of believers, and even seems to suggest that this belief has some share in the experience of reality. This is reflected in the conclusion of the song, which is less a rejection than a frustration of faith. The song ends with the repeated (nine times!) refrain ‘If I’m lost how can I find myself?’ It seems Healy no longer seeks merely the spiritualised idea of Jesus, but an actual being to whom he can attach himself. It is as though, in light of his resolve to be self-actualised, he is lost in the woods, trying to find his way with a compass that only points at himself. In this state, he returns to the original reason for invoking negative transcendence: he needs an object outside himself to rescue him from the turmoil within.

Considering this close listening of Healy’s song, I propose three concluding observations that can be drawn from his song and the general trend of songs that employ negative transcendence through addressing Jesus. Firstly, even within the profoundly secular industry of popular music, there is an openness to spirituality, religion, and Jesus. To me, it seems impossible to listen to the aching and honest words of Healy’s song, and say that his concerts constitute a purely secular space. Secondly, songs written not only about Jesus, but to Him, create a unique discursive space. By writing to Jesus as a person, rather than about him as a symbol, the artists create an imaginative and invocational space marked by ‘otherness.’ I believe these sorts of songs are so compelling and popular because they subvert the individualistic inclination that marks a majority of pop music. Finally, an invocation of negative transcendence may create an openness to a true spiritual experience. I find it interesting that with whatever agenda Healy begins his song— be it to contrive a spiritual experience through gospel music, or playfully mock a silent Jesus— he ends it in an attitude of openness, uncertainty, and searching.

Through invoking the imaginative presence of Jesus, the artist—and the listener—encounter a silence marked by expectation, that reshapes the very desires of those who invoke it. Perhaps in the silence of negative transcendence, the artists truly may encounter the divine.

Editor’s Note: This review is the first in a series of review clusters, a format new to Transpositions. Review clusters will include 2-3 short…