This Tuesday, October 31, marks the five hundredth anniversary of the beginning of the Protestant Reformation – the day Luther is said to have nailed his Ninety-five Theses to a church door in Wittenberg. It also marks Halloween, All Hallows Eve, the eve of the Feast of All Saints.

People will mark this day in different ways, and yet there is symmetry among all of them, whether one is marking the annual traditions or the half-millennial anniversary – they each have their ghosts that we, in our own ways, ‘celebrate’. 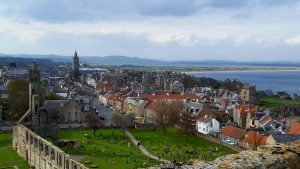 While the ‘spirits’ of Halloween or the All Saints celebrations may be more obvious to consider, one only need to walk around the streets of St Andrews’ town centre for evidence of ‘ghosts’ of the Reformation. Whether I look up as I walk, or down at my feet, I cannot miss remnants of what and who came (and went) before. In less than fifteen minutes, it is feasible to walk between at least six sites of famous Reformation conflict in town.

From Holy Trinity Church on South Street, the site of John Knox’s fiery 1559 sermon that incited an angry mob to march down to the end of the street and strip St Andrews Cathedral of its idolatrous effigies, I can follow the same steps today to visit the ghost of that cathedral in ruin. It is only a couple blocks from there to St Andrews Castle ruins perched atop the cliff shore where Archbishop Beaton was killed and his mutilated corpse hung from the window. 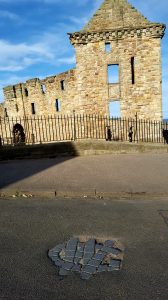 If I look down at my feet while gazing at the castle from the street, I just may find that I am standing on another marker of Reformation turmoil – the initials GW, which represent the spot where George Wishart was burned at the stake as a heretical Reformer.

A few blocks down on North Street, I encounter another set of initials, this time PH for Patrick Hamilton, who previously met the same fate as GW. To this day, as the first martyr of the Scottish Reformation, the ‘ghost’ of Patrick Hamilton haunts undergraduates who superstitiously steer clear of stepping on his monogram to avoid failing their degrees. Hamilton’s initials just happen to be set in the cobbles of the sidewalk in front of St Salvator’s Chapel, which survived the religious violence of the time and is still in use today. Even so, the Reformation period took its toll on the chapel too, particularly its art, as Reformers who took a dim view of its ornate, gothic structure smashed statues and vandalised the stained glass. 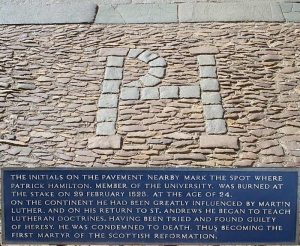 Clearly the iconoclastic impulse of the Reformation period was not kind to the art and architecture of St Andrews, or to its martyrs. Yet, ironically, icons of these ghosts of Reformation violence loom largely in view as I stroll, perhaps right over top of some of them, through town. In considering these as icons (eikons) – images that point beyond themselves – we can encounter each ‘ghost’ as more than simply a collection of remnant or memorial stones, no matter how artfully displayed. As icons, we can encounter them through our image-ination as testaments of a people of faith attempting, and failing miserably at times, to express and even share that faith. We can imagine, standing in front of them, how destructive intolerance, extreme dogmatism, corruption and religious zealotry can be. We can imagine the architecture of these structures and the people who once walked among them. And we can imagine their struggle.

In many ways, it is not so different from our own. Perhaps Catholics and Protestants are no longer locked into sweeping violence and intolerance of one another, but some divisions certainly can still feel impenetrable. We do not always feel welcome in places of Christian worship other than our own. We may not be able to partake fully in eucharistic celebration at the ‘other’ church.

Also, while Catholics and Protestants may no longer be entangled in religious violence against each other, religious war, terror and persecution still permeate parts of the world. Surely, ghosts will emerge from the rubble in those places as well, and those remnants may become icons of a people who once worshipped God there, not as a God of vengeance, but of love and peace; icons pointing to a different image of history than just the one crushed in rubble. 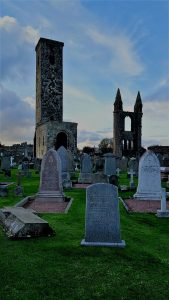 Photographs and poems, paintings and performance, music and dance have emerged to tell stories of, and beyond, the devastation. . . and beyond history. That is what art can do. Artistic representations, including icons, help us convey what cannot be said. Ironically, art rises from the ashes of iconoclasm; artistic expression rises from the devastation of oppression and the silencing, sometimes forever, of voices. Historic icons of the Reformation here in St Andrews connect us to a story ‘beyond’ what the history books tell.

And so, strolling among these iconic ghosts within the small town of St Andrews in the East Neuk of Fife, I am indeed transported beyond the images and stones – to a different time in this place, as well as to different places in this time. It is easy to lament what once was as I gaze at the remnant ghosts of these structures. And yet, they are still here, even if in a humbled, ruined state. In seeing and imagining what lies beyond these iconic testaments of faith, as well as appreciating their humble endurance as remnants, I can also lean into hope.

Reform brought division. But it also gave way, ultimately, to ecumenism. While utterly imperfect itself, the spirit of ecumenism can foster in us humility as a broken, divided people.

It can help us to see all that we share in our faith and in our service to others. It can allow us to enter fully into worship and community in our own way, and to express ourselves uniquely, so that collectively we offer a diverse and resounding symphony of praise beyond ourselves to God in whose image and likeness we were formed.

While that kind of communion may sound like a pipedream, I can attest that as someone born and raised Roman Catholic, I have found extravagant welcome and hospitality among the Protestant churches where I currently worship and serve. I have experienced a resounding ecumenical welcome here in the very place of such horrific division between the two factions. And I hold on to an image of that ecumenism that I experienced within my first month in St Andrews. Sitting alone in a pew on my first visit to a local Protestant church, I was overwhelmed by the welcome that surrounded me, and by the love letter written to me, as one of many, on the back of the notice sheet.

This message has been for me an icon of extravagant hospitality and a spirit of communion. I keep it with me, and I offer it here as part of my prayer on this 500-year anniversary of the beginning of the Reformation that we, who are made in the image and likeness of God, may be eikons of the Spirit of restoration and communion ‘beyond’ reform.

We are a mixed congregation
from many different walks of life, discovering
together what it means to love God and to love those
God has given us as our fellow-Christians, neighbours,
co-workers, and strangers – even those we frankly find it
difficult to get along with! So we’re on a steep learning
curve, and all at different stages on the way.
We are a church with an open door where everyone
is welcome. We make absolutely no apologies for
our commitment to Jesus, but nor do we expect you
necessarily to share that commitment or to bear its
costs. You are welcome among us as a believer, a
sceptic, someone unsure of what exactly they believe, or
someone simply seeking sanctuary and solace from the
unpredictable ups and downs of life, its hurts and
disillusionments. Wherever you’re coming from, you’ll
rapidly discover that there’s no ‘normal’ here. [1]