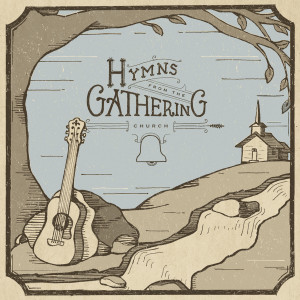 More than a year ago the Gathering Church embarked on a creative musical project.  Having dabbled in recorded music (a completed Advent EP used in conjunction with our Advent seasonal devotion and worship), we looked around our church community and local creative environment and began to envision what it might look like to do something on a larger scale.  Over almost a year’s time, we recorded a dozen hymns of various styles and ages in the lexicon of our local music scene.  Largely “public domain” in nature, these songs have become part of an “accessible canon” for our church community.  Hymns from the Gathering Church features songs that are definitely for us, we sing them in ways that not a lot of other people do, but these songs are also for the world.  Just as Jesus himself invites us sometimes in spite of ourselves, so these songs invite people of all levels of faith to sing with joyful lips, hesitant tongues, or even sheer holy silence.  Months after releasing this record, we have the luxury of looking back and reflecting on some of the things that this project has achieved (and is still achieving) and what went into its production.

The first driving reason for attempting another church music project was participation.  Every week, as leaders, we attempt to plan ahead of time the best ways to allow for the highest level and most varied participation in worship, indeed participation in the Triune life of God.  Through our singing, prayer, hearing, breaking bread, and welcoming, and by the ministry of the Holy Spirit, we participate in the perfect worship of the Son.  When conceived this way, crafting an album of re-imagined hymn texts became less a ploy to get people to sing more and better, though it did do that, and more of an entry point for people to see their God-given gifts and skills as worth applying  to the worship that God is calling us into.  It was easy to imagine those in and around the congregation who are able to “sing the phonebook” or play anything with strings being able to “participate,” but we also sought to allow for a wider conception of participation, artistic and otherwise.  Even our fund-raising featured a Kickstarter campaign that furnished contributors with homemade pies by someone in the community, bike-rides with the pastor, and a limited edition screen-printed poster designed by a member.

After the album was released, various members of the congregation reflected in writing on moments when these songs, became nearly sacramental to them.  For instance, the invisible trust and reliance of an infant in the arms of his father on display while the congregation outwardly intoned “Leaning on the Everlasting Arms.” Participation takes many forms, and should.  Hymns taught us in its conception and aftermath to be creative and encompassing in how we understand and invite participation.

Other key considerations were discovery & recovery.  Generally, the performances on the record feature local artists singing as guests on music made by the production crew.  Some of the artists are Christians; some are not.  Some have sung at church; some have never darkened our doorway.  Either way, it was immensely gratifying to see the discovery that occurred throughout the creative process.  A local liberal weekly magazine thought it interesting enough to remark on the church music’s ability to allow people to “consider faith, not coerce it.”  Whether it was culling through arcane lyrics, shaping the composition to reflect the content in a new way, or bringing a song into play that the production crew hadn’t even heard or considered, it is pleasing to see the gospel conversations started by such traditioned innovation.  One traditional choral tune used, “God Be In My Head,” found its way both onto the record with a “Sleep Walk”-esque guitar part, and into a “Blessing of the Books” worship service at the beginning of the fall semester in our academically minded community.

By dusting off some old texts, we found that even in our largely post-christian context, there was a favorable reception and receptivity.  Ours is a culture that values tradition-to-an-extent and wrestles with the memories of faith to which a well-worn patina alludes.  These songs, “christian” in a far more explicit way than most CCM music, are disarming precisely in their lack the suspicion of being Trojan Horses for a message.  And so they, sometimes surprisingly, sound interesting to those who might never tune into christian radio.  After the record was played on a local college radio station, our music director was stopped in a local coffee shop and told by a stranger about “Be Still My Soul:”

It’s a hymn I’d heard countless times growing up in the Lutheran church, but it never really connected with me. Your version was a comforting salve in a time of deep grief for me and my wife and a reassuring voice in the “thin place” where I’ve been lingering.

Artists are never completely in control, nor are they responsible for their work’s reception.  It was our prayer in planning and production that these songs might be used by God in His grand project of recovery, whereby we all discover that though we might have left Him, He never really left us.  That “thin places” are everywhere if you have ears to hear and eyes to see.  By recovering some old church songs, some folks are actually recovering their faith and their ability to sing praise.

You can use this link to embed a player that is able to stream the album in full:

Chris Breslin is the Associate Pastor of the Gathering Church in Durham, NC.  He received an MDiv from Duke Divinity School and enjoys exploring the intersections of Pastoral Theology & the Arts.