[As part of our ‘Christian Doctrine and the Arts’ series, Eden O’Brien investigates the disembodied experiences that can result from our engagement with technology and looks to the Doctrine of the Incarnation as a remedy and guide for logging on in healthy and holistic ways. For more information on this series, see the series introduction.]

From smartphones to video streaming services, various technologies underpin the digital culture in which we continually engage. Digital technology—and its most pervasive host, the internet—now features in all areas of human life. Indeed, the scope of digital technology’s effect on human life—in what could rightly be termed a ‘mass-upload’—is not limited to the spheres of communication, commerce, and entertainment but is quickly re-shaping how human beings experience themselves as embodied entities. Therefore, taking stock of the deeper implications of digital culture brings to the surface questions about human identity, particularly the unprecedented extension of the mind beyond the body that is concomitant with online engagement. In turn, the ongoing crisis of embodiment sets the stage for a contemporary interpretation of the Doctrine of the Incarnation.

I. The Scope of the Logged-On Mind

When you sit down to your laptop and start up Microsoft Teams or pull out your phone to Google something, you hook in to the internet. In such moments, what precisely is the scope of your intellectual vision? Indeed, vast archives of music once pressed to vinyl, scans of obsolete magazines, recordings of old TV shows and out-of-print novels available as EPUB files make it possible to re-create the past in your mind. In a similar way, visual media of landscapes, bustling markets, and city streets—perhaps supplemented by Google maps—make it possible to get a sense of different countries and cultures the world over.

The breadth of the mind when trawling through time and cyberspace can be just as vast and unbounded. This is not to say that most or even many people in their regular use of the internet are cognisant of the spectacular breadth of what it means to be online. Even so, we have all had moments—particularly those of us who can recall the magic of pre-social media internet—in which we’ve recognized the sheer size and mystery of the power available at our fingertips. We have seen pictures of cyberspace—likely a deep blue sprinkled with spindly points of white light or streams of numbers resembling a distant cosmos. But what happens to the body when we are online? Browsing archives or taking a virtual tour of another country is not typically considered time-travel or bilocation. While we acknowledge that our postures may suffer and our thumbs may stiffen from scrolling, the virtuality of engaging with the internet suggests that we leave our bodies at home. 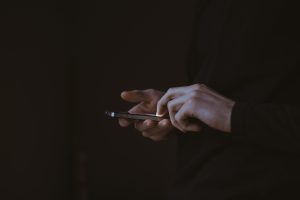 The sense of physical abdication that comes from engaging with cyberspace is brilliantly captured in William Gibson’s 1984 classic, Neuromancer. Although written from a pre-internet standpoint, Neuromancer is jarringly perceptive and even prescient in its illustration of the mind’s ambiguous status when engaged in virtual incorporeality. When the main protagonist and expert hacker, Case, ‘jacks-in’ to a powerful AI system, his mind and body split. Unanchored from the reliability of embodied sensation, Case’s experience is described as follows:

His mouth filled with an aching taste of blue.
His eyes were eggs of unstable crystal, vibrating with a frequency whose name was rain and the sound of trains, suddenly sprouting a humming forest of hair-fine glass spines….
The roof of his mouth cleaved painlessly, admitting rootlets that whipped around his tongue, hungry for the taste of blue, to feed the crystal forests of his eyes, forests that pressed against the green dome, pressed and were hindered, and spread, growing down…[1]

Although perhaps not representative of the typical experience of signing in to Facebook, Gibson captures the vast scope of the mind and the fluidity of images, words, and sensations experienced in cyberspace. As the body’s role in navigating the cyberworld loses relevance, the boundaries between senses blur and Case tries to ‘taste’ the colour blue. The absurdity of the crossed senses described here illuminate the similar confusion one might experience after a day spent sending and receiving virtual meetings or scrolling through Instagram. Like Case hurtling through cyberspace, when the primacy of the body is displaced one becomes unmoored from sense and self.

In their 1998 paper entitled ‘The Extended Mind’, philosophers Andy Clark and David Chalmers theorized that human cognition can be extended beyond the body, or what they refer to as ‘the boundaries of skin and skull’.[2] According to their ‘active externalism’ theory, ‘the human organism is linked with an external entity [such as a calculator] in a two-way interaction, creating a coupled system that can be seen as a cognitive system in its own right’.[3] So long as the coupling of the internal cognition with the external system is reliable, these systems are ‘part of the basic package of cognitive resources that [one brings] to bear on the everyday world’.[4] Turning to the impact of this theory upon social relations and the nature of the self, the philosophers ultimately propose a notion of the self that is relational and, therefore, extended.[5] This is to say that ‘socially extended cognition’ is possible if one’s ‘mental states [are] partly constituted by the states of other thinkers’.[6]

In addition to referring to Filofaxes, this 1998 paper expresses uncertainty over whether the internet would come to extend cognitive processes in the manner described.[7] Twenty-three years later and most people in possession of a smart phone have a considerable portion of their lives contingent upon online systems. If Clark and Chalmers’s thesis holds, engagement with our various devices constitutes a legitimate extension of cognition. By re-conceptualising the self as partially relational, questions about the mediating nature of the body arise. One might ask, ‘Can the self be dissipated by the extension of the mind beyond the body’? Indeed, Clark and Chalmers imply as much when they say, ‘… once the hegemony of skin and skull is usurped, we may be able to see ourselves more truly as creatures of the world’.[8] While this concept is meant to be optimistic, in the wake of the digital revolution it may—like the passage from Neuromancer—strike us as hauntingly sinister. Yet, the phrase ‘creatures of the world’ reminds us of the truth that we are at once made from and belong to the world as relational and materially bounded creatures.[9]

III. You Are Not a Gadget

Together, Neuromancer and ‘The External Mind’ illustrate the hazards of the unlimited, unmediated man. But what of his opposite? Could it also be that in logging on, users are individuated to the point of destruction? This is the fate that computer scientist and godfather of virtual reality Jaron Lanier cautions against in You are not a Gadget. The once provisional philosophies that now underpin modern computing interfaces—the webcams and mobile phones that ‘make up extensions to your being, like remote eyes and ears’—have the power to ‘change how you conceive of yourself and the world’.[10]

Part of the reason why the philosophies that shape everything from user-interfaces and software programming to digital aesthetics have not changed since their conception can be explained by something Lanier calls ‘lock-in’—when a rule is so fundamental to a system that it becomes impossible to alter it because so much has been built on top of or according to it.[11] Crucially, as a consequence of lock-in, the internet necessitates modes of engagement that reduce human beings to fragments, or what Lanier calls ‘bits’.[12]

‘Pervasive anonymity’—such as the comment threads on YouTube videos—and the prioritisation of the voice of the crowd—such as the editing practices of Wikipedia—are, for Lanier, key examples of how we are reduced to fragments online.[13] He even suggests actions that readers can do ‘to be a person instead of a source of fragments to be exploited by others’.[14] These include not posting anonymously, emphasizing individual voices over the din of the crowd, building a personal webpage, and putting hours of thought into blog or video posts.[15]

What Lanier is proposing as a defence of individuality is really the re-instantiation of embodiment on a virtual stage. However, when we are simultaneously susceptible to the extremes of boundlessness and fragmentation, a paradox arises as each suggests itself as the solution to the other. The Doctrine of the Incarnation, on the other hand, challenges what it means to be a virtual human being—whether unbounded or fragmented. As the final justification for the body’s goodness, the Incarnation is relevant to the boundless-fragmented paradox that centres around the problem of ‘leaving the body at home’. 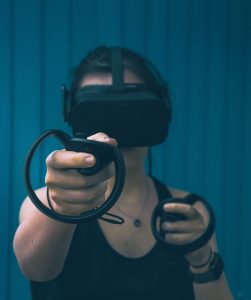 The incarnated Christ stands at the nexus of body, spirit, and relationality. When Christ took on an identity through material individuation, he also anointed the experiential parameters concomitant with the body. ‘The Son of God… worked with human hands; he thought with a human mind. He acted with a human will, and with a human heart he loved’.[16] The purpose of putting this doctrine in conversation with the paradox that arises from the use of digital technology is not to propose the ethical ramifications of or specific prohibitions against the internet. Rather, this conversation leverages the diagnostic potential of the Incarnation. Through this lens, the tension between fragmentation and boundlessness can be seen as the result of an unnatural rending apart of what is yoked together by divine example.

This is to say that Christ’s own humanity is the pattern of embodiment that should bear upon the way that we engage the internet. In fact, the numerous heresies that plagued the Doctrine of the Incarnation in the early Church can sketch the parameters of how Jesus, had he condescended in 2021, would have used the internet. Simply put, any mode whereby he is more soul than body or more body than soul—which roughly captures the paradox in question—would be false.[17]

Christ’s own humanity is the pattern of embodiment that should bear upon the way that we engage the internet.

Bringing into view the age-old dilemma of body and soul, the peculiarity of orienting ourselves within cyberspace is not wholly unprecedented. If the above passage from Neuromancer captures the splintering flight of the mind into cyberspace, Gerard Manley Hopkins’s poem ‘That Nature is a Heraclitean Fire and of the Comfort of the Resurrection’ captures the inverse. In this poem, Hopkins is fossilized in the very density of matter—in sensation, sight, and sound.

Cloud-puffball, torn tufts, tossed pillows | flaunt forth, then chevy on an air-

Built thoroughfare: heaven-roysterers, in gay-gangs | they throng; they glitter in marches.…

Of yestertempest’s creases; | in pool and rut peel parches

Sheer off, disseveral, a star, | death blots black out; nor mark

Is any of him at all so stark

But vastness blurs and time | beats level. Enough! the Resurrection,

Across my foundering deck shone

A beacon, an eternal beam. | Flesh fade, and mortal trash

Fall to the residuary worm; | world’s wildfire, leave but ash:

In a flash, at a trumpet crash,

I am all at once what Christ is, | since he was what I am, and

The acuity of Hopkins’s perceptions, even to the point of overwhelming him, is a testament to his incarnational existence. He does not reduce himself to his sensitive organs, for that would be to entrench himself so firmly in matter that he would risk his poetic vision. But when liberated from fallen flesh by the Resurrection, he does not rush into a boundless existence either. Rather, in the pattern of Christ Incarnate, Hopkins finds a middle way. Whether the middle way of the internet consists in virtual embodiment, as Lanier suggests, remains to be seen.[19] But what is clear is that digital technologies present an interesting set of challenges that are redefining what it means to be human and, in so doing, invoking ever more versatile applications of Christian Doctrine.