[Editor’s Note: For his contribution for the ‘Christian Doctrine and the Arts’ series, Gerard McNair-Lewis explores the idea of the Christian imagination, describing how an imagination enriched by faith can transform our perception of the world.  For more information on this series, see the series introduction.]

The revelatory, transformative power of the Christian imagination is captured by C S Lewis in Surprised by Joy. Lewis describes the instance in which the transcendent entered his imagination while reading George MacDonald’s Phantastes:

Even when real clouds or trees had been the material of the vision, they had been so only by reminding me of another world; and I did not like the return to ours. But now I saw the bright shadow coming out of the book into the real world and resting there, transforming all common things and yet itself unchanged.[1]

As Lewis suggests, the Christian imagination has significant repercussions for our existence in the world. This essay seeks to show what the imagination is, how being a Christian informs it, and how it is integral to the human being’s interaction with truth. As demonstrated by Lewis, the imagination, when thought of and with correctly, can reshape our perception of the ‘real world’.

With the knowledge given by faith, one recognises and acknowledges a painting of divine things in the same manner as if one were to look upon a photo of a loved one

The example of the unicorn can be used to illustrate the cooperation between the imagination and intellect in the pursuit of understanding. The unicorn, a mythical creature which does not exist in reality, is known when the intellect makes intelligible the combined phantasms of ‘four legged, ridable creature’ and ‘horn atop animal’s head’. Though imaginary, the unicorn is not free of reality’s limitations. Robert Sokolowski explains that, in the imaginative process, ‘the real world […] remains as the believed-in, default context within which [one] imagine[s]’.[5] For the intellect to make intelligible an imaginary thing, a certain order of meaning is required, for the ‘antithesis [of meaning] is not error but nonsense’.[6] Imagined things are limited by the ‘default context’ of the real world,[7] for otherwise they would be unintelligible. The attainment of truth is only made possible by the human being’s recognition of meaning.

To disentangle the imagination from the intellect would mean that a unicorn would become an affront to truth: truth is not so weak, but, rather, has an overwhelming presence. T S Eliot, for example, observed that objects in the world cannot help but overflow with being, and in response to this noted that ‘human kind / Cannot bear very much reality’.[8] By means of the imagination, though, the human being is able to find meaning in the world they inhabit.

The Effect of Baptism on the Imaginative Process

Baptism transfigures the human being’s imaginative process, as the gift of grace enriches the Christian’s capacity to find meaning in the world. Faith, as that which enables the Christian to recognise and accept this gift, allows one to receive a more expansive, perceptive imaginative vision and thus a deeper knowledge of truth. Through baptism, a new order of knowledge is made available through divine revelation. In this sacrament, one ‘dies unto the oldness of sin’ and is ‘incorporated in Christ, as one of His members’, where a ‘spiritual sense [is derived] consisting in the knowledge of truth’.[9] Through baptism, as sanctifying grace flows throughout the human being, one is freed from their binding to sin, and divine assistance is bestowed for the sake of allowing one to recognise their ultimate end. In this way, God illuminates the twofold darkness into which we were born: sin and ignorance.[10]

Baptism removes the obstacles of sin— that which is opposed to being and truth —and ignorance— the inability to know what is true. Thus, baptism makes possible an individual’s attainment of truth. Through the gifts of faith, the imaginative process assumes a supernatural worldview as its principal lens, allowing one to reach beyond the visible horizon and encounter the world in a wholly different way.

The Christian Imagination and Art 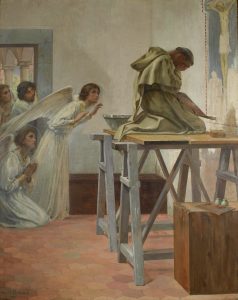 As baptism presents new possibilities of knowing and interacting with the world, the Christian artist assumes the task of expressing this supernatural aspect in their work. Étienne Gilson explains that a painter’s role is to discover and convey the reality ‘hidden behind’ the natural world.[11] However, accepting this ‘direct invitation [given] to artists to join in the praise of God by cooperating with his creative power and beauty in the world’[12] can be profoundly challenging. Yet the Christian imaginative process enables the Christian artist to meet this challenge, uncovering and promulgating the meaning hidden in the world.

Though the primary task of the Christian artist is to convey the supernatural reality that is present in the world, the task of receiving it is the duty of all Christians when they encounter an artwork. Michael D O’Brien’s paintings, for example, are not only the result of the Christian imaginative process, but also reveal how the Christian imagination can respond to art. In ‘Mother and Child Reading the Word’, O’Brien presents to the viewer an explicitly religious painting: Jesus and Mary gazing into each other’s eyes as a dove is flying overhead, while all are within the grasp of God the Father’s hands. The Christian imagination responds to this scene with deep love and affection principally because one ‘rel[ies] upon the subject more than upon the art as a source of emotion’.[13] With the knowledge given by faith, one recognises and acknowledges a painting of divine things in the same manner as if one were to look upon a photo of a loved one.

The Christian imagination is also required to find meaning and religious resonances in notionally secular art. In ‘A Place We All Could Live’, O’Brien depicts the scene of a rural town occupied by a Church and many homes. A family is seen walking towards a frozen pond to partake in recreation with their fellow townspeople. To find meaning in what is seen, one may, for example, ponder over the nature of a town and how it should be oriented towards unity in Christ. Or one might ask whether the family’s going to the water is symbolic of one’s entering into the life-giving water of Christ’s baptism in the Jordan or even the water that flowed from His side.  For such a painting, the Christian imagination finds deeper meaning behind the content already present.

The Christian Imagination and the World

Whilst the Christian’s imaginative process has a significant effect on one’s interaction with art, it transforms an individual’s interaction with the world to a greater extent. The Christian imagination provides one with a sacramental worldview, whereby one is able to see God’s workings in quotidian and mundane things. For each individual, this reveals itself through an array of devotional practices. John Henry Newman describes devotion as those ‘religious honours [that] belong to the objects of our faith, and the payment of those honours’.[14] Since the Christian faith is unable to be contained by propositional statements alone, the Christian imaginative process helps one to foster faith through a variety of alternative practices.[15] By means of the Christian imagination, one is able to tap into the rich well of faith in order to discover a fount of meaning that was not originally available.[16]

Our understanding of truth often develops from our belief in what is experienced. This ‘tortured intensity of life’,[17] though, should not be feared, and the imagination ought not be an escape from the world. Instead, the imagination, informed by the supernatural gifts of faith, is meant to transform the manner in which the world is perceived and experienced by an individual. The purpose of the Christian imagination, as witnessed by Lewis, is to obtain ‘the repose of a mind which lives in itself, while it lives in the world, and which has resources for its happiness at home when it cannot go abroad’.[18]

[10] ‘Pour forth a ray of your brightness into the darkness of my mind, disperse from me the darkness into which I was born, sin and ignorance’. See Pius XI, Studiorum Ducem, encyclical letter, Vatican website, June 1923, http://www.vatican.va/content/pius-xi/la/encyclicals/documents/hf_p-xi_enc_19230629_studiorum-ducem.html (accessed May 25, 2021).

[14] John Henry Newman, ‘The Belief of Catholics Concerning the Blessed Virgin, as Coloured by Their Devotion to Her’, in Certain Difficulties Felt by Anglicans in Catholic Teaching (London: Longmans, Green, and Co., 1900), https://www.newmanreader.org/works/anglicans/volume2/pusey/.

[15] For this same reason, Timothy Radcliffe no longer sees theological polemics as the sole resource to society’s struggle in retaining the virtue of religion, as this ‘belongs to another world and speaks another language’. Rather, he suggests a rekindling of society’s imagination. See Timothy Radcliffe, Alive in God: A Christian Imagination (London: Bloomsbury Continuum, 2019), 5.

[16] For an example of the Christian imagination’s encounter with Scripture and its reception of paradoxical descriptions of Christ, see Joseph Ratzinger, ‘The Feeling of Things, the Contemplation of Beauty’, Vatican website, August 2002, http://www.vatican.va/roman_curia/congregations/cfaith/documents/rc_con_cfaith_doc_20020824_ratzinger-cl-rimini_en.html.

[18] John Henry Newman, ‘Discourse 7: Knowledge Viewed in Relation to Professional Skill’, in The Idea of a University (London: Longmans, Green, and Co., 1907), https://www.newmanreader.org/works/idea/discourse7.html.