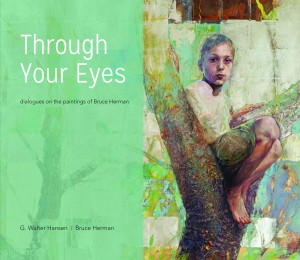 I’ve been waiting to see this book ever since I heard that it was in the works several years ago, and so I was happy to receive my review copy several days before the book’s release. Like Makoto Fujimura’s Golden Sea, Through Your Eyes is a sort of mid-career retrospective. That said, this book is less a catalogue, and more a conversation between the reflections of G. Walter Hansen and Bruce Herman. Thus the subtitle: dialogues on the paintings of Bruce Herman.

We begin, strangely enough, with the “Postscript”:

The authors have attempted to include you, the viewer and reader, in our ongoing conversation about art and faith – and we have tried to model what we feel is that “excess of meaning” … The deepening mystery and meaning – the reality that art is more than what the artist conceives and creates – can be experienced only by a participant, not by a passive consumer.  That is why we have written this book – an extended meditation and invitation to you to enter with us into the larger conversation of tradition, of faith, of art as culture making.[p. 115]

With that in mind, we flip back to the beginning: “Rome: A Vision.” Reading through this chapter I repeatedly thought of Jacques Ellul’s The Meaning of the City, an influence that Herman ends up mentioning in the chapter that follows. He notes: “Though I was reading Ellul and watching dystopian films about technology and urban blight, I was also reading in Scripture of the stunning and hope-filled truth that at the end of human history we don’t return to Eden but become citizens of a city …. I wanted to paint images that captured this paradox.”[p. 24] He later returns to this theme.[p. 43; cf. 47] Most interesting, here, was the side-by-side comparison of Herman’s “Rome: A Vision,” from the “Building in Ruins” series,  and William Blake’s “Newton.”[p. 9]

Continuing, I paused to look at one of the Lanesville Murals, the “Expulsion from Eden,” and this after reading Herman’s description.  He explains: “Our interpretation of the Genesis 3 passage differs radically from that traditional scene: in the large middle panel the viewer sees Adam and Eve embracing and being protected and clothed by their Creator–and sent out (rather than expelled).”[pp. 34-36] Interesting.

I’ve seen many of these works before on Herman’s site. Less familiar, and thus particularly interesting, were the images of the earlier stages of “Second Adam.”[pp. 64, 67; fig. 45 in particular] I always enjoy seeing something of the process, a privilege not often granted aside from the occasional studio visit.

Sometimes the “behind the scenes” look is less visual, more verbal as with “Overshadowed,”[p. 58] a piece that I’ve always liked and which I included in Art that Tells the Story. Herman comments:

The archangel’s explanation of the divine conception is a mystery that I have never really seen depicted, except as a very thin golden thread issuing from a dove aimed toward the Virgin’s womb (Italian school) or as a mysterious ray from the sky (Byzantine icon tradition). I have never felt that these images convey the sense from the rather laconic text in Luke.[p. 73]

Having recently considered several of the works Herman describes in an ITIA seminar with the Revd Jonathan Mason (“Painting the Incarnation,” 20 December 2013), they’re fresh in my mind, and though I think there’s more to the those images (i.e., not just in terms of descent, but ascent) I tend to agree. “Overshadowed,” by contrast, overwhelms the viewer, and draws them into the moment.  Herman continues: “This painting was a gift, but not one that came free of charge in terms of the painting process…. It is rare, in my experience, for an image to come to me fully developed, requiring only that I faithfully execute and ‘get it right.'”[p. 73] “Overshadowed,” it seems to me, does just that.

Herman’s “Presence/Absence” series, an exhibition of which I had the privilege of seeing at Calvin College (Grand Rapids, MI, USA), and QU4RTETS series  finish the book, though the “Timeline” that follows as a sort of appendix was a nice touch and shouldn’t be missed.

See my review of the QU4RTETS catalogue here.

Best enjoyed slowly, several pages per day (or evening, if it makes its way to your nightstand) over the course of several weeks, Through Your Eyes is recommended for those interested in contemporary treatments of religious subjects and fans of Herman’s work.  A lovely book from Eerdmans, what I hope might be the first of several volumes of its kind.