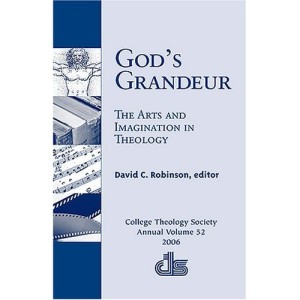 God’s Grandeur is a collection of essays from the 2006 annual conference of the College Theology Society (CTS) and National Association of Baptist Professors of Religion (NABPR). David Robinson has collected a fine variety from the overwhelming wealth of presentations at the conference. The text is broken into five sections: Visual Arts, Musical Arts, Literary Arts, Aesthetics and Education, and Contemporary Forms.

I would love to see more edited collections on theology and the arts that, despite diversity and expansiveness, offer a cohesiveness.* This collection lacks cohesiveness in part because it is true to its purpose. It is essentially a book of bound conference proceedings. Their understandably narrow focus has hindered the volume, I contend, from getting the kind of audience it might have otherwise.

For the rest of this review I’d like to focus briefly on three of the contributions to the volume, those of Sandra Bowden, James F. Caccamo, and Colleen Carpenter Cullinan. I think these are three of the strongest essays in the collection and are three that may be of interest to readers of Transpositions:

“A Quiet Renaissance: Artists of Faith for a New Century” by Sandra Bowden (38-49) explores the way in which matters of faith have always been part of the cultural landscape of films and art exhibitions, despite many critics being surprised by their mainstream popularity in recent years. Bowden explores the seeming disconnect between those in positions of power in cultural institutions dismissing the importance of religious art for the contemporary cultural mindset and the overwhelming interest in faith, art and the imagery of Christianity. This essay is likely to be of particular interest to artists, those engaged in curation, and those interested the study of exhibition trends in relation to matters of religious art. Following discussion of exhibitions at the National Gallery in London, Museum of Modern Art in New York, and the Provincial Museum in Edmonton, Bowden shares the way the work  of Christians in the Visual Arts (CIVA) is quietly working to shape and influence contemporary art alongside St Louis University’s Museum of Contemporary Religious Art (MOCRA) and the Museum of Biblical Art (MOBIA) in New York. This chapter also contains an overview of Bowden’s work as introduced by the artist herself.

Next I’d like to consider, “The Listener as Musician: The importance of the Audience in the Moral Power of Music” by James F. Caccamo (59-79). Caccamo explores the complex relationship between music and moral action, and he argues for a deeper and more nuanced theological framework for both its appreciation and its critique. He explores the theological frameworks that consider the primary value of music as either that of inspiration or instruction and argues instead that more emphasis needs to be placed on the listener. Although much of his argument is reminiscent of reader-response theory, there is a strong emphasis here on enthnomusicology and its methodology. This essay is an interesting example of a theological rationale for the qualitative  study of religious and arts practice in examining the relationship between music and moral action. Consequently, Caccamo’s essay will be of interest as much to those interested in maligned contemporary musical genres like metal and goth as it will be for those interested in U2 and contemporary christian music.  Indeed, this chapter is extensively footnoted providing a useful bibliography for those interested in Theology and music.

Finally, I’d like to consider, “Imagining Redemption: The Novel as a Source of Dangerous Memory” by Colleen Carpenter Cullinan (95-109). Cullinan begins from the premise that theology is rooted in narrative, and specifically the narrative detailing the experience of believers. She states that the most important role of the imagination is “our constructive capacity to integrate our experience into dynamic and effective wholes which then function as interpretative grids of further experience” (96). For Cullinan,  “Dangerous memory” is that which destablizes or challenges the status quo, particularly in light of Joseph Metz’s “political theology,” and it may have far-reaching consequences for the whole of society (98). Cullinan explores novels such as Barbara Kingsolver’s Animal Dreams which directly address the notion of dangerous memory. In many of these case, “dangerous memory” is expanded to include a notion of memory that is incomplete or irretrievably altered.  Finally, she considers whether some novels garner a certain place in our imaginations such that they become part of our memory — a dangerous part — and function as something real upon which we rely and reference, though they may not be factual, historical or true in any sense. This definition of “dangerous memory” and assertions about the role of the novel has implications for explorations of cultural intertextuality, including, I contend, what Northrup Frye terms “resonance.” As such this essay is likely to be of interest to those interested in contemporary literature and theology, mimesis, or cultural intertextuality.

For the purpose of assisting those who might be interested in the very specific purview of one of the papers, here is a list of the essays included in the volume.

* One collection that I’d like to highly commend to you is also a journal volume, but it is more cohesive in its approach:  Religion & Literature, Vol 41:2, Summer 2009.