It would be difficult to read Jackson Pollock’s so-called drip paintings as the product of theological intent. Judging by their titles, which range from Devil to Cathedral to non-descript numbers, not to mention the legion of studies on Pollock’s influences, [1] the drip paintings appear so variably significant that one cannot make a case for any straightforward theological meaning. Nevertheless, questions about a painting’s origin and a painter’s own concerns are only one way of understanding a painting’s significance. Rather than making a theological argument about Pollock’s paintings based on intent, I instead make an argument about their theological significance based on effect.

This is an argument appropriate to the nature of art. A significant dimension of art’s purpose is to provide a unique sort of knowledge – one might call it an experiential sort of knowledge – about a fundamental aspect of the human condition. One of the ways that art accomplishes this is by opening a more immediate encounter with reality than is possible in day-to-day life. We typically engage with reality as artificially limited by our own parochial concerns. The age-old association of art with religion, either in terms of cooperation or displacement, is in part due to its capacity to confront us with reality in more fundamental terms – life, death, time, space, human, divine – than our narrow interests typically allow. 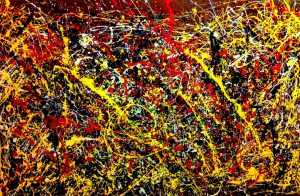 Pollock’s drip paintings accomplish this with respect to, among other things, the nature of vision itself. In most Western painting from the Renaissance to the end of the nineteenth century, the nature of human vision is assumed. Human vision is positioned to determine the organization of the painting. The picture plane accommodates itself to the viewer through devices such as perspective and chiaroscuro. In the twentieth century, however, painters begin to challenge the assumption that the spectator’s visual expectations should determine the picture plane. A painting instead becomes an opportunity to experience vision itself differently. [2]

Pollock’s drip paintings represent a potent example of this. Tangled webs of winding lines, some thick and others thin, some continuous and others broken, the drip paintings (with a few exceptions) offer no discernible representations to the visual grasp. Neither do they, unlike other instances of “abstract” art, offer relationships between clearly defined geometric shapes, nor any center of focus or part-whole relationship. All of these conventions of vision are defied. What the paintings do offer is energy, specifically rhythmic energy. Neither energy nor rhythm, however, are typically visual categories, so what can it mean to say that a painting is “of” rhythm and energy?

The drip paintings are traces of the rhythmic energy of Pollock himself, his dance around the canvas mapped by the paint. [3] The viewer is then “compelled to follow the painter through the movements he made to create them.” [4] In standing in front of one of Pollock’s drip paintings, the viewer finds his or her eyes moving compulsively across the canvas, following lines that have no end. The eyes can never come to a place of rest but are instead invited into an eternal motion. The typical difference between figure and ground is dissolved, changing the viewer’s experience of the space of the canvas. There is no depth that relies on perspective, but there is nevertheless depth-as-mystery, a cosmic space without boundaries just beyond the tangled web yet inaccessible to the viewer.

The viewer is drawn into this space, continually attempting visual forward motion by alternately following the lines and attempting to peer through the lines. This is the depth of the nebular night sky, or the sea, or the clearing beyond the thicket – vast and immediately present, but visually ungraspable.

Yet for all the energy they communicate, the paintings are not chaos. The viewer’s gaze moves energetically, but not without form. Contrasts of light and dark, thick and thin, create a sense of undulation or rhythm that guides vision’s movement through the tangle, not in the sense of guiding anywhere in particular, but simply guiding it through the never-ending movement itself. Pollock’s paintings have been likened to jazz improvisation, not least because both forms exhibit exultation, urgency, and spontaneity barely governed but governed nonetheless by rhythm. [5] Energy and rhythm, then, are not “objects” of vision in the conventional sense but experiences of vision itself precipitated by Pollock’s lines.

Vision is a dimension of human experience that bears theological import. The Christian tradition includes the hope for the “beatific vision,” that we will see God face to face (1 Cor. 13:12). Due to the way in which we typically encounter objects in day-to-day life, we sometimes make the mistake of thinking that this means that we will see God as one sees other objects and that the only reason we cannot do so now is either due to a veil of sin, the hiddenness of God, or an incapacity of our corporeal visual apparatus. The experience of vision itself in an encounter with the divine, however, is not questioned by many Christians. The reason this is nevertheless significant is due to the relationship between vision and comprehension. In the West, “seeing is believing,” to see is to comprehend (thus the exclamation “I see!” when something has been made conceptually clear). This is the way in which vision works with respect to Renaissance and Romantic painting. To see the painting is to comprehend its subject. To assume that human vision will operate in the same way with respect to God may therefore carry with it problematic assumptions about comprehension as well, problematic because to suggest that one, even eschatologically, comprehends God is to suggest that God has been mastered.

The question therefore becomes “what could it mean to see differently? To see without comprehension, without mastery?” Pollock’s painterly challenge to the concept of vision is an answer to this question and, in this respect, it resembles Gregory of Nyssa’s response to the same question. 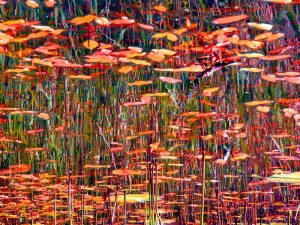 In his Life of Moses, Gregory contemplates how it is that Moses, who supposedly spoke with God face to face (Exodus 33:11), nevertheless asked to see God’s glory. Moses’s desire for God, he suggests, was insatiable, and in fact must remain insatiable.[6] As such, Moses was only permitted to see God’s back. Gregory says that we are to understand the fact that Moses was not permitted to see God’s face as an indication that his vision of God is of a kind that provides no satiety. The true Being, which gives life, transcends all characteristics and therefore transcends knowledge and sight. Therefore, to know and see God, to make of God an object that can be circumscribed by human vision would be to reject God as the one’s source of life and so to die. Seeing the divine essence is an impossibility for all creatures.

Nevertheless, this is not a painful state. Gregory says that ‘what Moses yearned for is satisfied by the very things which leave his desire unsatisfied.’ [7] Rather than desire being satisfied by grasping or possessing the desired, desire for the divine simply continues to expand as one progresses into the divine. The deeper the mind proceeds into the contemplation of the divine, the darker and less clear things become because God is “seen” only as invisible and incomprehensible. Gregory says that this is ‘seeing that consists in not seeing because that which is sought transcends all knowledge.’ [8] The divine cannot be seen because it is infinite and therefore has no boundary; that which has no boundary cannot be contained within vision. Vision in this case is not a power of comprehension applied to all one surveys from a position of rest. It is, instead, the power of motion by which, as C.S. Lewis says, one continues to travel ‘further up and further in.’ [9] This type of vision, rather than any bounded form, is what Gregory argues is meant by God’s “back.”

Just as Gregory challenges our assumption that our typical experience human vision will determine the way in which we relate to God, Jackson Pollock challenges our assumption that vision can only operate by grasping, by resting on objects. ‘Might it instead be the case,’ both figures ask, ‘that vision is a capacity that can be stretched and challenged beyond our expectations?’ The experience of staring at a canvas that does not allow your eyes to rest but, with its insistent energy continually draws the gaze deeper and deeper into the energy of the lines, engulfing the viewer in its reality, is an experience of the sort of relationship Gregory suggests is the case between the human and God. [10] The divine can only be known in and through the rhythm, through those motions in which one encounters the divine. Pollock’s paintings are not paintings of God or of the divine as such. But they are paintings that disrupt our assumptions about how vision functions. They are occasions to experience and practice a different kind of seeing – seeing as motion rather than seeing as grasping.

In this sense, Jackson Pollock has painted God’s “back.”

[1] Examples include Evelyn Toynton, Jackson Pollock (New Have, CN: Yale University Press, 2012); David Anfam, Abstract Expressionism (London: Thames and Hudson, 1999); Michael Leja, Reframing Abstract Expressionism: Subjectivity and Painting in the 1940s (New Haven, CN: Yale University Press, 1993).
[2] Cubism is a particularly good example of this phenomenon.
[3] Toynton, Jackson Pollock, 47.
[4] Ibid., 51.
[5] Ibid., 57-58.
[6] Gregory of Nyssa, The Life of Moses Book II, 231-32.
[7] Ibid., 234-35.
[8] Gregory of Nyssa, The Life of Moses Book II, 163.
[9] C.S. Lewis, The Last Battle.
[10] A review by Parker Tyler describes Pollock’s drip paintings in terms of the labyrinth of infinity, ultimate time and space, “at an infinite and unreachable distance, a distance beyond the stars – a non-human distance.” He says “Pollock gives us a series of abstract images…which by their nature can never be read for an original and indisputable meaning, but must exist absolutely, in the paradox that any system of meaning successfully applied to them would at the same time not apply, for it would fail to exhaust their inherent meaning.” Parker Tyler, “Jackson Pollcok: The Infinite Labyrinth.” Magazine of Art. (Washington, D. C) 43. NO 3. March 1950); 92-93. See Michael Leja, Reframing Abstract Expressionism, 317 for deleted sections of the review.