As a Transpositions contributor, I was invited to view Chris Goode’s new show GOD/HEAD during its recent London run and interview its creator. In a recent post, Jenn Craft suggested that ‘one might encounter God through an atheist’s work‘; this interview presents an atheist artist’s own account of his unexpected experience of God and how he is processing that experience through art.

Part one of my interview with Chris Goode is below. Part two will run on Wednesday. More information about GOD/HEAD, which opens Wed 9 May in a new run at Theatre in the Mill, Bradford, can be found here. 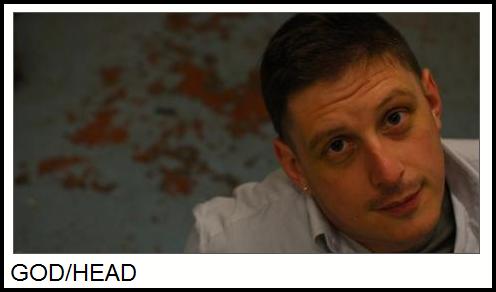 At the point that I started making the show, I had no idea what my take on the whole experience was. I didn’t know where the inquiry was going to lead me. So, in a sense, in watching the show you watch the arc of my (still unfinished) thought process. I suppose the strongest or most dependable insight in that process is the one that I arrive at in the final sequence of the show: that what I feel most deeply, beyond the narratives of religion or neuroscience, is my own fervent wish to be faithful to, and to speak faithfully about, my ‘God experience’, without reducing it or resolving it; and the desire to establish a meaningful, habitable relationship with the truth of that experience in my everyday life. That’s work that’s only just beginning now, and by which I am really daunted.

2) Can you tell us more about how the act of creating theatre functions for you as a way of understanding yourself and the world?

For me, theatre is an acutely responsive apparatus for modelling (or remodelling) the structures in which we live together. It’s a space that’s both speculative and at the same time grounded in present realities. Increasingly it makes no sense to me to consider the individual as a unit: we can only signify in relation to others: which means it’s not only more exciting to think through difficult ideas in company, it’s also more productive, and the insights that arise feel more reliable because they’re never just conceptual or hypothetical, they’re always already being enacted in a social situation whose dynamics we can observe and feel. Theatre is first and foremost an erotic construction in the sense that Bataille describes, where our task is essentially to try and eliminate the discontinuity between people. GOD/HEAD refers quite explicitly several times to the desire that that eroticism bespeaks, to the extent that some people have seen the piece as being entirely a metaphor for the relationship between performers and audience in a theatre – which is certainly a fertile reading.

3) In the show, you begin by letting us know that the material might be uncomfortable for some. You also point out that it’s a personal challenge for you, as an atheist whose friends are Marxists, to do a show about God. How have your atheist friends reacted to the show? Have you had any reactions from religious groups/audience members?

The response on all sides has generally been very positive, I guess because I’m just thinking aloud, I don’t ultimately come down strongly on either side of the question. I suspect audience members who have some religious faith are worried at the start that I’ll be trashing their beliefs, and those (particularly those who are friends already) who are unequivocal atheists are a bit concerned to begin with that I may have gone over to the other side; so I think there’s some relief all round! All I’m doing in the show is attesting to a personal experience, and it’s hard for people to disagree with that. I think for my atheist friends on the left – and I still line up with them, really – the problem is not so much with accepting the possibility of God as with what that possibility is then used to do, how it can often be the origin of a transcendental outlook that takes our attentions away from the material realities of our global situation. An acceptance of God in the mix has made me, if anything, more vigilant in wanting to keep my political hands dirty. The only reactions to the show that have made me uncomfortable and dismayed have been those in which people of faith have insisted that they know more about my experience than I do, and that what I really need is to go to their church. This wouldn’t be so bad if it weren’t inevitably occurring in the immediate aftermath of a performance I frequently find extremely difficult and draining to do. The obliviousness of some religious people to the human situation they’re engaging with can be kind of astounding.

4) In the show, you consult a neuroscientist to see if she can shed any light on your experience. Have you also spoken to a priest, pastor, rabbi, or other member of the clergy to get their take? If so, how was that experience, and if not, why not?

I didn’t consult any member of the clergy in a formal way, though I’ve had a number of interesting and illuminating conversations with religious people. I did consider it, and in fact it was part of my original design for the show; but actually, from the outset – as I say in the show – it was very clear to me that what happened to me was absolutely not a religious experience as such, but a direct revelatory experience of God, which seemed, if anything, to obliterate much of what I understand religion to be. In other words, there is no religious voice represented in the piece because it’s so difficult to talk about God with a religious person without the conversation being about the terms and conditions of their particular religion. It seemed to me that the most scrupulous way of trying to think afresh through the implications of the presence of God was to begin by cutting that question free of the baggage that comes with religion, which I took to be irrelevant – possibly even inimical – to the matter in hand.

Join us Wednesday for the conclusion of my interview with Chris Goode.