[Editor’s Note: Our series on The Saint John’s Bible nears its end with the final of three Visio Divina Advent reflections on illuminations at the beginning of the Gospels of John, Matthew, and Luke. This week, Jonathan Homrighausen reflects on the frontispiece nativity illumination for the Gospel of Luke.  Our series will culminate in January after a break for the winter holidays.  The staff of Transpositions wishes you a very Happy Christmas and New Year!  For an introduction to The Saint John’s Bible and this series, click here.]

In Advent we celebrate the coming of the Word made Flesh into human life—the crazy paradox of the Supreme God becoming a vulnerable baby—the mysterious morphing of one thing into another. Donald Jackson’s Birth of Christ, illuminating Luke’s infancy narrative (Luke 1–2), celebrates transformations of many kinds: the formless God becoming presence and image, primates becoming human image-makers, and death becoming birth. [1] 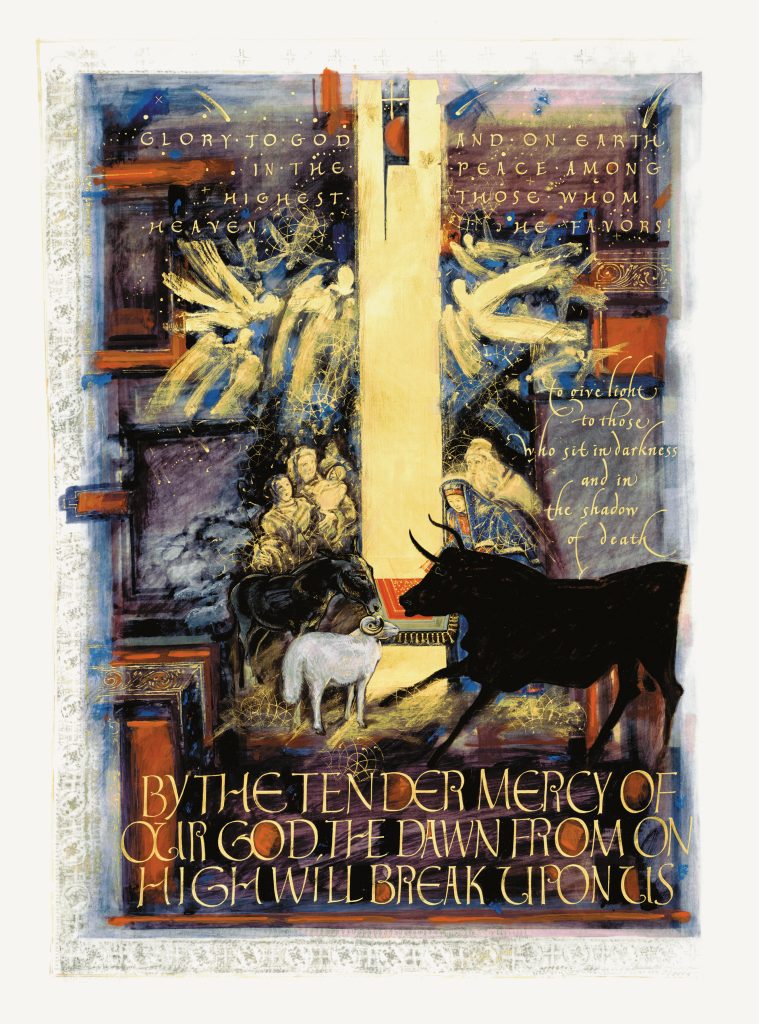 Perhaps the first thing we see when gazing at this image is the gold—the formless God becoming presence and image through a precious metal. Donald Jackson is a master gilder, and he uses his technique to the fullest here and in many other illuminations in The Saint John’s Bible. We see gold letters boldly proclaiming the angels’ ‘Glory to God’ to the shepherds in capital letters (2:14) and lines from Zechariah’s song praising God (1:78-79). While Zechariah proclaims that John the Baptist will ‘give light to those who sit in darkness’, Jackson actually gives us that light. As a former docent of The Saint John’s Bible, I’ve witnessed again and again how the gold leaf on its pages reflects light differently to every person standing around it at different angles. It reminds us that God is light (John 1:4-5). The letters are present—this calligraphy is words and letters made flesh.

The central use of gold here is the bright column of light, symbolising communication between humanity and divinity. Jackson’s use of gold draws on biblical and early Christian imagery of gold as divine presence. Ancient Israelite devotion included the use of gilding to symbolise God’s presence in the Temple: in the ark of the covenant (Exodus 25:11), the priestly garments (Exodus 28:8), and other Temple and Tabernacle artifacts (Exodus 25:31, 37:6; 1 Kings 7:49-51). Beginning in the fourth century’s explosion of Christian art, Christian writers expounded gold’s symbolic connections with light, the sun, moral purity and virginity, imperishability, and, most importantly, the presence of God. Craftsmen, keenly aware of the potent symbolism of this precious metal, made use of it for aesthetic and spiritual effect. [2] And how fitting to use gold for the nativity scene, since gold was one of the offerings of the wise men to Jesus (Matthew 2:11).

Jackson also uses gold to represent the presence of angels at the nativity, the angels who have been proclaiming this birth to the shepherds (Luke 2:9-14). Any artist depicting angels faces a challenging choice: portray them looking like humans or make them otherworldly? Biblically, sometimes angels appear in human form such that humans do not comprehend their true nature, as when Tobias does not recognise Raphael’s identity (Tobit 1:4). However, other times they appear in glorious splendour. Cornelius sees ‘a man in dazzling clothes’ (Acts 10:30); in Matthew, an angel whose ‘appearance was like lightning, and his clothing white as snow’ (Matthew 28:3) appears at the empty tomb. In Catholic theology, angels are spirits without bodies, but they can take on different physical forms when they appear to humans. [3] Angels can be disguised as ordinary humans, like Jesus himself on the road to Emmaus. But they can also dazzle with divine presence and light.

By using gilding to abstract the angels, Jackson creates images that simultaneously shine with brilliant presence and suggest the hiddenness of the divine. The bright, glimmering angels are among the first things one sees when looking at these pieces. Yet the viewer only sees an outline of the divine figures. Both pieces reflect the theological point that the angels’ true forms are hidden. They are not actually physical creatures as humans are. Though they reveal something of the presence of God, they also conceal, as they are lower than God and serve as intermediaries between God and humanity. Angels, and Jackson’s gilded versions of them, at once reveal God and reveal the limits of human concepts and images in comprehending God.

Christian theology affirms that humans are made in the image of God (Genesis 1:26-27). Yet when did we ourselves become makers of images, creators reflecting the Creator? The creation account in Genesis makes it clear that humans are special, different from the other animals. Yet we inhabitants of the twenty-first century understand that humans evolved from other primates. Indeed, The Saint John’s Bible affirms and incorporates modern scientific understandings of creation at many points. [4] So when did we cross the line from mere primate to self-conscious human? Jackson hints at one answer: when we first started making art. The ox prominent in this illumination is based on a cave painting in Lascaux, France—maybe 20,000 years old—and reflects the beginnings of human image-making. God becoming man is a stunning transformation. But what about human becoming artist? Without the vocabulary of visuals, Christians would miss a vital mode for communicating the central wonder of the Incarnation.

The third transformation: death becoming birth. As the border to this illumination, Jackson employs a textile pattern used only here and in his illumination of the raising of Lazarus in John (11:1-44). In the image in John, the viewer looks from the perspective of Lazarus inside the tomb, rather than the crowd outside the tomb. We are Lazarus, seeking resurrection. Lazarus sits up and moves toward the light at the end of the tunnel, symbolising Jackson’s mother’s near-death experience when giving birth to him. [5] By connecting his own birth with Lazarus’s new life, Jackson links Jesus’s miracle of raising Lazarus with the miracle of new life worked through women worldwide. If Lazarus is death becoming birth, then Mary’s miracle was non-life becoming life. 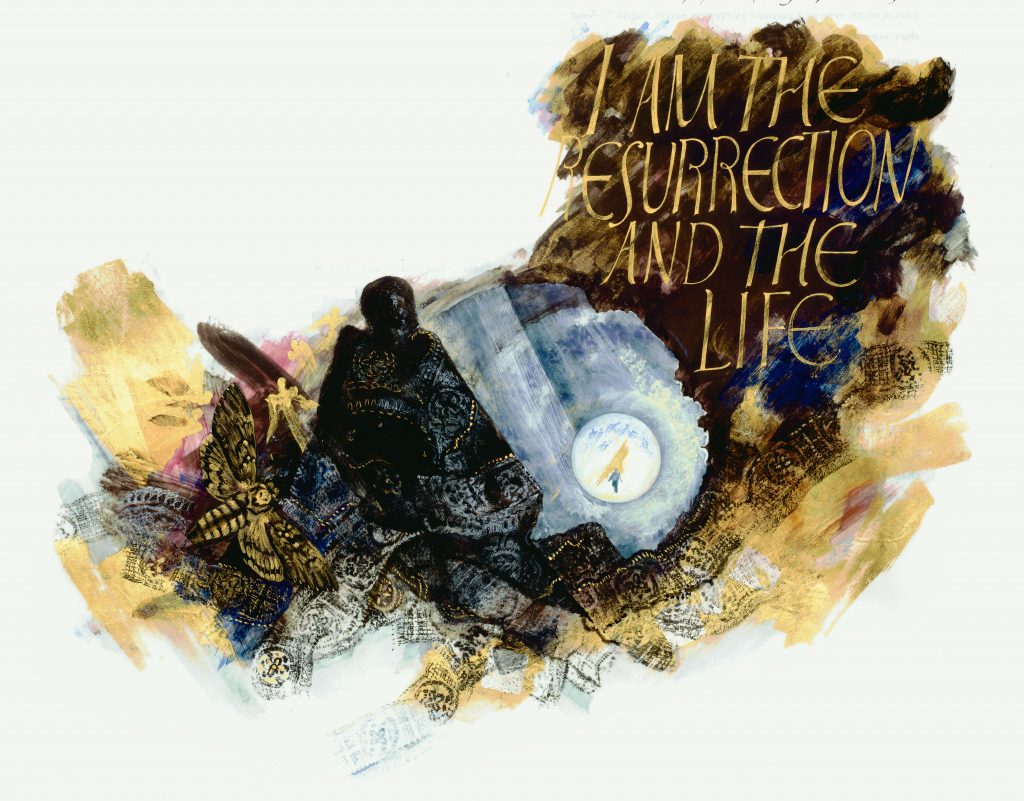 As we move toward Christmas itself, celebrating darkness becoming light and God becoming man, let us also celebrate other mysterious transformations: formless God becoming imaged presence, humanity becoming image-maker, death becoming birth and life springing from non-life. May the light and colour of The Saint John’s Bible inspire our own transformations this Advent and Christmas. As we gather around the fire and tree with loved ones, may we transform our communities into places of welcome, our hearts into abodes of kindness, and our souls into dwelling-places for the living God.

[1] Several of the ideas in this reflection are based on my book Illuminating Justice: The Ethical Imagination of ‘The Saint John’s Bible’ (Collegeville, MN: Liturgical Press, 2018), as well as a forthcoming article titled ‘Words Made Flesh: Incarnational, Multisensory Exegesis in Donald Jackson’s Biblical Art’.

Jonathan Homrighausen (MA, Graduate Theological Union) is currently pursuing a PhD in Hebrew Bible/Old Testament at Duke University. He spent two years with the Heritage Edition of The Saint John's Bible while working in Archives & Special Collections at Santa Clara University. He is the co-author, with J. David Pleins, of Biblical Hebrew Vocabulary by Conceptual Categories: A Student's Guide to Nouns in the Old Testament (Zondervan, 2017).