[Editor’s Note: In the second part of our eight-week series on The Saint John’s Bible, Jonathan Homrighausen, author of Illuminating Justice: The Ethical Imagination of ‘The Saint John’s Bible’ (reviewed here last week), provides commentary, lectio divina insights and image exegesis on the Song of Solomon, one of the most heavily illuminated books of this Bible. For an introduction to The Saint John’s Bible and this series, click here.]

While I was writing Illuminating Justice, I realised I could write an entire book on The Saint John’s Bible’s illuminations of the Song of Solomon. The Song, one of the Wisdom Books of the Christian Old Testament, is a series of poetic dialogues between two lovers. They speak of their desire for one another, the danger and thrill of love, and the continual interplay of presence and absence. As Cheryl Exum writes, ‘through seductively beautiful words, the lovers materialize and dematerialize in a continual play of seeking and finding’. [1]

Many scholars today read the Song as a collection of secular love poems. But for most of its history, Jews and Christians have celebrated this wondrous poem as one of the Bible’s most intimate depictions of divine-human relationship: between God and Israel, or between Christ and the Church. Sadly, it is neglected in many churches today. It only appears once in the three-year Sunday cycle of the Revised Common Lectionary. But those in the medieval church read it constantly, as evidenced by the quantity of Song commentaries they produced. [2] The Saint John’s Bible aims to recapture this long tradition of exegesis, much of it rooted in the medieval monastic heritage of the Benedictine monks of Saint John’s Abbey.

The Song of Solomon is the most heavily illuminated book in The Saint John’s Bible. Every page of this biblical celebration of love is suffused with color and symbol. Here, we focus on one motif: the vibrant red circle inside a square boundary—the garden with its fertile pomegranate. 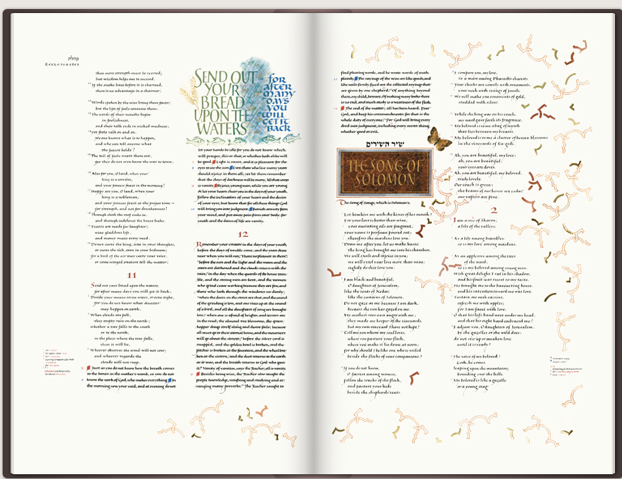 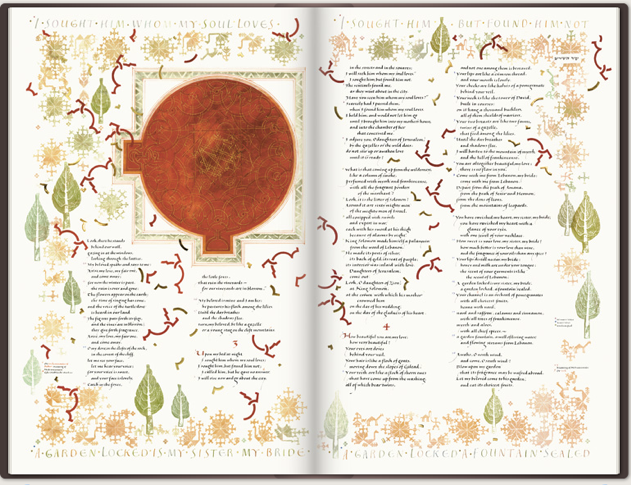 This circle is the garden, the setting of the Song. It is also metaphorically the woman’s body. As the giant letters at the bottom of the page proclaim, ‘A garden locked is my sister, my bride; a garden locked, a fountain sealed’ (4:3). Inside the garden, Illuminator and Artistic Director Donald Jackson placed a geometric motif which extends around these two pages and the previous page opening the Song. The scattering and gathering of these geometric patterns represents our relationship with God: sometimes we feel God present; other times we feel only absence. Jackson compares this image to iron shavings gravitating towards a magnet. [3]

This square Garden, the sacred space of the Song, alludes to the most holy sacred space in ancient Israel: the Temple. In the symbolic language of The Saint John’s Bible, squares are frequently Temple imagery, such as in Solomon’s Temple (1 Kings 8:1-66). 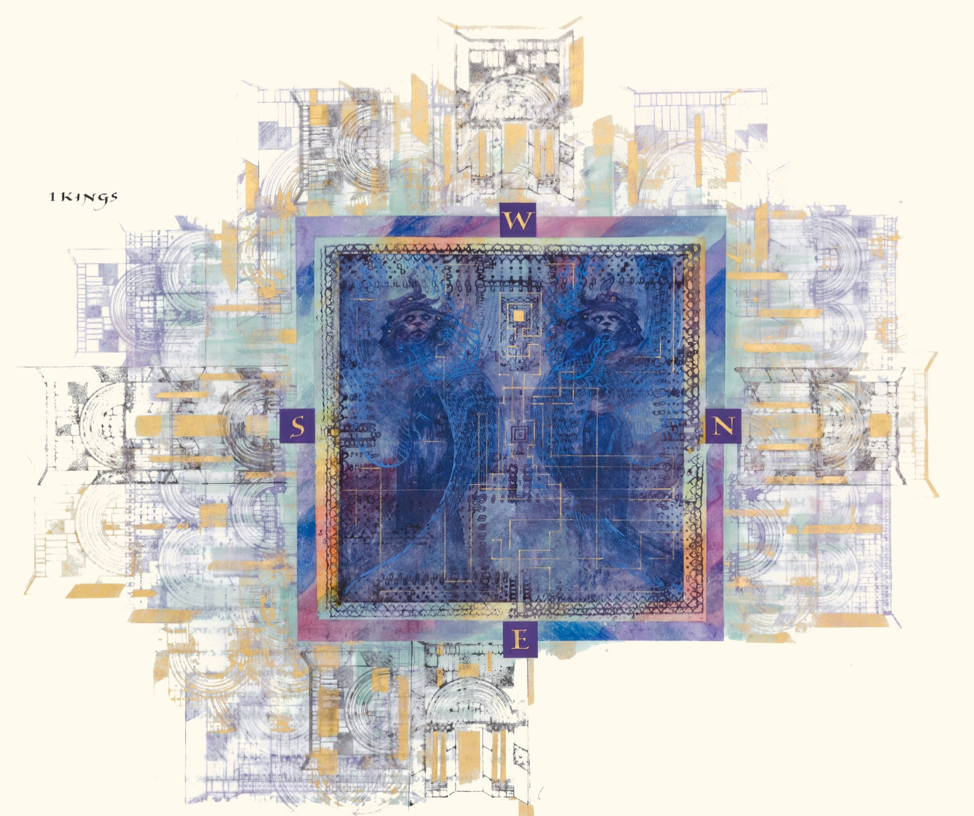 This square pattern appears several times in The Saint John’s Bible’s illuminations of Temple traditions, whether in prophetic visions (Ezekiel 40:1–48:35; Isaiah 6:1-13), the return to Jerusalem after the exile (Nehemiah 8:1-12), or the New Jerusalem in Revelation (21:2–22:5). The focus on the Temple fits perfectly with this Bible’s Catholic theology, which places great importance on liturgy and sacred space in the sacramental imagination. [4]

Jackson’s association between the Song of Solomon and the Temple parallels the intimacy of God’s presence in the Temple with the intimacy of the lovers in the Song. Indeed, many of the sensory symbols used by the male lover to praise the beauty of his beloved (4:1-15) are spices and oils used in Temple worship. The myrrh, cinnamon, and aromatic cane used in metaphors about the woman’s body (4:6, 13-14) appear also as ingredients in Temple anointing oil (Exodus 30:23). The pomegranate, a metaphorically potent fruit (Song of Songs 4:3, 13), adorned both the Temple itself (2 Kings 25:17) and Aaron’s priestly robes (Exodus 28:33-34). [5] 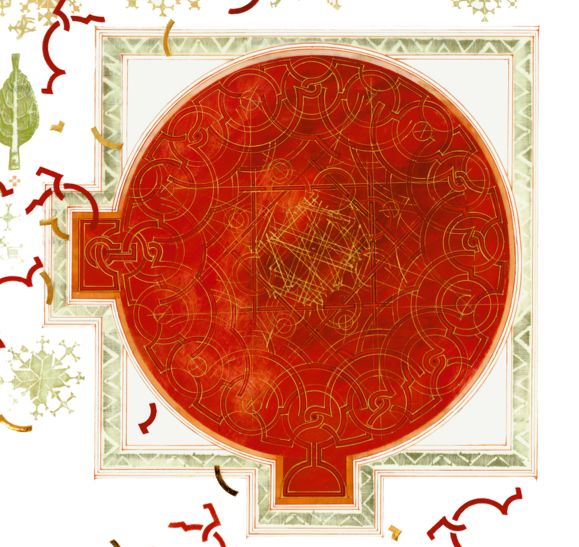 The geometric patterns, which begin on the first page, vary in their own absence and presence. Some are hollow and light, others are dark and filled in; some are far from the garden, some close. Some smaller flecks are in gold, hinting at the full divine presence to come. They lead into the red, circular garden, which completes the motif. But even within the garden itself, the pattern is incomplete: the full presence of God remains inarticulable in any medium. 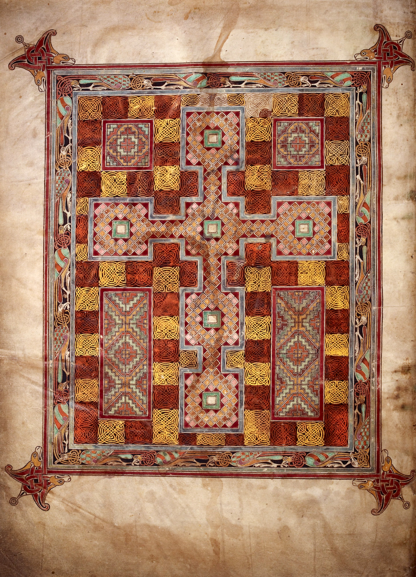 As the viewer’s eye follows these geometric patterns around the page, as her mind fills in the patterns of the garden, she slowly ponders the full divine presence of the page and in the text. The cross, made up of many smaller patterns, becomes the full pattern of creation, imprinted in the viewer’s mind.

This prayerful absorption guides us back into the words of Scripture inside the marginal illumination. We now read the Song of Solomon slowly, pondering its nuances, in the monastic lectio divina which The Saint John’s Bible celebrates and Benedictines practice. [7] Reading is no longer consumption, a task to be completed. It has become contemplation, a garden to which we can continually return and pluck exegetical and spiritual fruit.

[2] E. Ann Matter,The Voice of My Beloved: The Song of Songs in Western Medieval Christianity (Philadelphia: University of Pennsylvania Press, 1992).

[7] See Matthew A. Rothaus Moser, ‘Should Bibles Be Beautiful? How Beauty Teaches Us to Pray’, in The Saint John’s Bible and Its Tradition: Illuminating Beauty in the Twenty-First Century, ed. Jack R. Baker, Jeffrey Bilbro, and Daniel Train (Eugene, OR: Pickwick Publications, 2018), 43–58.