A Review of  Bouma-Prediger, Steven. For the Beauty of the Earth: A Christian Vision for Creation Care, 2nd ed. (Grand Rapids: Baker Academic, 2010.) 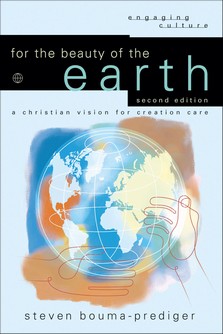 The end of the twentieth century and the beginning of the twenty-first has seen a dramatic rise in the systematic interaction between theologians and the cultural framework they find themselves embedded in. As Dave mentioned at the outset of his review of Performing the Sacred, the Engaging Culture series by Baker Academic Publishing provides a wonderful starting place for such an endeavor. The seventh book in the series For the Beauty of the Earth: A Christian Vision for Creation Care by Steven Bouma-Prediger in its 2nd edition, shifts the focus of the series from the realm of liberal arts into the sciences all the while encouraging an ever more substantive conversation about how the Church should interact with and construct cultural frameworks striking the balance between engaging and building culture. In For the Beauty of the Earth, Bouma-Prediger strikes that balance wonderfully and accomplishes both activities.

At first, I thought it was odd that such a book would be up for review on ITIA’s blog. Although for someone like myself who has a keen interest in both art and science (especially from a Christian perspective) it only seems natural to connect such things, I thought I was a strange breed. That may be true, but as soon as I starting reading, it became apparent that Bouma-Prediger himself would draw a connection there. From the way he talks about perception of place in the first chapter to the way he deals with scripture in the fourth, it is obvious that he considers the whole task a matter of creation in every sense of the word. In the same way that the artist seeks to draw the reader out of their own experience through imaginative activity, the author invites us to enter another world, a fundamentally ecological and interconnected one. In doing this he draws inspiration from some of the usual suspects in theology and the arts bookshelves, Wolterstorff, Berry, Ricoeur, Hopkins, Dyrness, Dillard, Stegner, and Wells. Although at this point the more science minded might conclude this means that he presents a romanticized portrait of a nature worth saving because it is “pretty”, this is not the case at all. He actively avoids such an interpretation and appeals to the reader’s sentiment only enough to emphasize that humans do have an emotional/aesthetic connection to the environment, while insisting that we not stop there. He consistently urges us to gird up our understanding of nature with firm theological foundations.

The crux of these foundations appears in chapters five and six where he lays out alternatives to the views that he discusses throughout the beginning of the book. In chapter five, he outlines a theological foundation for the practical, ethical system he then presents in chapter six. Some specific virtues, he believes, must be cultivated to strengthen such a system. Through this section he takes a theological motif and uses it to abstract an ethical principle, which includes two virtues. For each virtue, he discusses associated vices (for most, there is one each of excess and deficiency). Through this process, he also creates a list of seven moral maxims:

I think that this extension of Aldo Leopold’s Land Ethic is at least a firm foundation upon which to build a thoroughly Christian method of thinking about environmental issues. As someone who cares deeply about these things, I am grateful that there are people who devote their time and wisdom to projects such as these. In the case of Steven Bouma-Prediger, it is time and effort well spent. Alongside other great Christian thinkers of our day like Bill McKibben, Wendell Berry, and Norman Wirzba I think we see the church continuing to flesh out what it means to believe that God is the Center and Creator of all things. The author said it best himself, “We must cultivate a (sub)culture of creation, in which we gratefully acknowledge a loving God who creates and sustains and redeems all things, and whose vision of shalom includes a flourishing natural world of meaning and value.” (80)

For the Beauty of the Earth stands as a clear call for the church to be always engaged in the act of creation care, in all its aspects, and it sets out a clear biblical foundation upon which we can stand, a collection of virtues we can cultivate to help us along the way, and a ethical framework to which turn in the decision making process.

Brandon Keith Craft is pursuing an MSc in Forestry from the University of Bangor, Wales. His research interests include sustainable development, aesthetics and the environment, and Christian engagement with place.