[ EDITOR’S NOTE – Junius Johnson continues our RE-MEMBERING SERIES launched at the beginning of Lent to consider, among other things, a wider view of what Christian hope looks like.  In this article, he looks through the lens of  imagination and elements of  Dante’s Divine Comedy at the tension in which all of human history takes place – navigating the terrain between the world as God created it to be before the Fall and the new creation promised in the eschaton (Dante’s Paradiso).]

And so everyone coming into the world is haunted by the sense that this is not the way things were meant to be, or not the way they should be, or not the way they have to be. This conviction, which does not rise to the level of knowledge because it eludes justification, remains unshakeable, and becomes a source of torment. Faced with a relentless and unconquerable unwillingness on the part of the world to become what (we at least) think it should be, this conviction, which nevertheless remains, becomes a temptation to despair.

And yet, for the Christian, these three remain: faith, hope, and love.[1] This Corinthian triad, often called the theological virtues, define the boundaries of the Christian form of life in the world. Christians may and do struggle with faith and love, but there is no authentic Christian without at least a deposit of these. But then what does it mean that hope, too, is a theological virtue if not that we have a duty to hope? And if we have a duty to hope, then we also have an obligation not to fall into despair, the failing of hope.[2]

This is a theological truth: the world is not as it was meant to be (Fall), and the world will not always be as it is (eschatology). In the space between what was intended and what will be accomplished all of history is stretched out, and our entire experience is mapped onto this tension.

However, it is not any hope whatever to which we are held, as if the Christian had the duty to simply be an optimist in all situations. Rather, what we are held to is specifically Christian hope, which differs from worldly hope in its grounding. It is not that worldly hope is groundless, but its grounds, which are other than the divine, are finite, transient, and non-ultimate. Such hope sometimes delivers; but it never offers sure footing for the mind or the heart. It is always fragile, and we often rightly fear that at the slightest sign of difficulty it will disappoint. Christian hope, by contrast, is grounded on the promises and character of God. Consequently, it is firm and unshakeable. It is of such a sort that when a person loses trust in it, the failing is found to be with the one despairing, and not with a defect in the ground of hope.

We must keep this in mind in the season of Lent, when it can seem that we surrender willingly to despair. But even in the Triduum, in the darkest nights of the Christian year, we do not act out the drama in despair, but rather in hope: Lent is a season of preparation, and so its inner meaning is not the penance and discipline, but what these aim at: the Easter resurrection, the glorious light of salvation, and the hope that awaits even the most desperate of sinners. We do not march to the cross or the grave, but through them to the unhoped for reversal of resurrection.

But why should it have been unhoped for? How did it come as such a shock, when, as Jesus claims, it had been taught throughout the Scriptures? Is it not because our dreams were too small? And small dreams are a sure sign that the imagination has become constrained; that, rather than roaming unfettered through endless realms of light and shadow, it has shrunk into the tiny confines of the known.

I wrote earlier of the grounding of Christian hope in the character and promises of God, and this is certainly true. But this is, as it were, an external grounding: that the things hoped for will come to pass in meaningful ways. But if this Christian hope is to pass from being a broad category to being the actual hope of some Christian, then there must be a corresponding internal grounding. This has to do with how the promises of God are received, and how the character of God is conceptualised. As I said before, the failure of Christian hope is in the Christian who turns to despair, not in some frailty in the hope; there are then, necessary subjective conditions for the thriving of this hope.

We do not march to the cross or the grave, but through them to the unhoped for reversal of resurrection.

Hope is tightly allied to possibility: when we find that we no longer believe that what we hope for is possible, that hope quickly sours into despair. And within our mental landscape, it is the imagination that is especially designated to concern with the possible. Hope may be vague or specific, but it sharpens with increasing specificity. It is the work of the imagination to take our hopes and give them form and shape.

In Paradiso XXV, Dante is catechised by the apostle James on the nature of hope. Before he can even begin to answer the questions, Beatrice jumps in and declares concerning the pilgrim: ‘The Church Militant has no son with more hope.’[3] Why does Dante the poet paint himself as the man of greatest hope in all his day? He says he has it from James, and having received those riches, ‘I in turn rain on others what you have rained on me.’[4] He does this by his poetry; he is doing it at that very moment, in writing the Commedia. It would be a mistake to think that what Dante is describing in the Commedia is the afterlife, the world after death; rather, he is describing all of reality, which includes the world of the living. Only he has seen (because he does not take our world as he finds it) that the world before death and judgment cannot be properly described except from the perspective of the world after death and judgment, the world to which it is pointed. But the bigger question is why he wishes to describe all of reality. And the answer, he tells us here in Paradiso XXV, is hope. Inferno and Purgatorio both present penalties for sin of enormously daunting proportions; indeed, arguably, the torments of Purgatorio equal those of Inferno. But there is one single difference that converts the wailing of the damned into the hymnic singing of the purgatorial: hope. Hell is so far removed from hope that it must be thrown away before one even enters its gates (‘ABANDON EVERY HOPE, YOU WHO ENTER’).[5] In Purgatory we see that with hope the saints can bear all things. 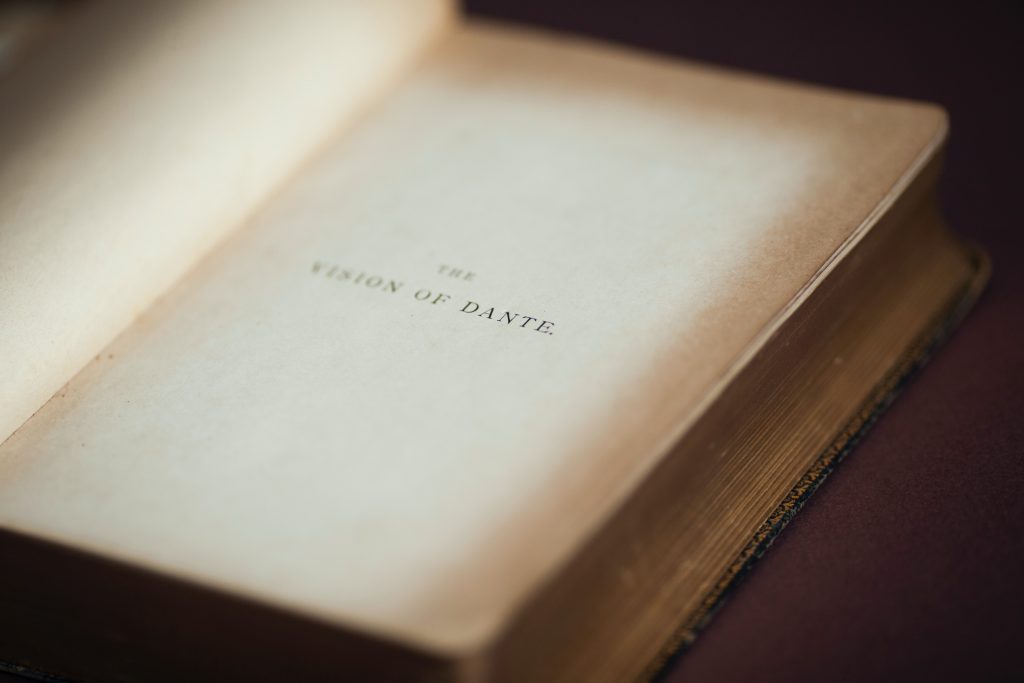 What Dante has realised and devoted his best work to is that the nourishing and guarding of hope is the special duty of the imagination. Where reason defines the boundaries of the actual and the possible, the imagination rushes right up to these boundaries and, in a sort of careless way, dashes past them. Reason cannot pass beyond the possible because it cannot go where there is no grounding. But the imagination can fly, and so it can run right off the cliff of putative possibility into the ocean of conceivability, and in so doing, may return with anecdotal evidence that there is more ground out there, that reason has not properly fixed the boundaries of the possible.

But Christian hope goes so far beyond what we can ground with reason that if the believer is forced to stay only within the confines of what we know and have experienced, this radical hope will begin to look like so much fantasy, a distant island on the sea of impossibility. The imagination, in charting waters previously thought unnavigable, also clears a path that draws those islands ever closer to our minds and hearts.

There is another reason that imagination and hope run so closely together, and this is that hope is closely tied to beauty; indeed, perhaps even more closely tied than it is to goodness and truth. For hope is a sort of attraction, and it is beauty that draws us forward, becoming the desirability of the true and the good. And the imagination is a beauty factory; or better, a wellspring, constantly throwing up wonders.

And, so, my advice is to fight despair with imagination. When the promises of God seem too small, unleash your imagination to unpack their potential. When the evil of the world seems too great, set your imagination loose in exploring the good. And when your own sin seems unforgivable, fill your imagination not just with the decisive severity of the cross, but also the wild joy of the resurrection.