Mary Poppins, the film based on the novel by Australian writer P. L. Travers, was one of Walt Disney’s greatest successes when it first debuted in 1964, and its five Academy Awards (out of thirteen nominations), its Golden Globe Awards and Grammy Awards, and its astronomical sales at the box office prove it. [1]

One of film’s songs, “Feed the Birds,” was Disney’s favorite; the Sherman brothers, its composers, were often called to play it for him on Friday afternoons in his office, sometimes bringing tears to his eyes. [2]  As Dave Parfitt notes in an interview with Richard Sherman, Disney ‘loved that song and knew it was the heartbeat of the whole movie.’ [3]

This deeply spiritual song encapsulates the Christian themes of love and charity present in Mary Poppins. The Bird Woman is an image of God’s charity – watching over the flock, being present for them, and meeting their emotional needs, as illustrated in the lines: ‘Feed the birds, that’s what she cries, while overhead her birds fill the skies. All around the cathedral the saints and apostles look down as she sells her wares; although you can’t see it, you know they are smiling each time someone shows that he cares.’ Mary Poppins’ use of the Bird Woman as an image of charity echoes her own role as a bringer of charity and salvation to the Banks family. While Poppins could be viewed as a heroic archetypal figure, she can be defined more precisely as a female Christ figure, the first, actually, in American film. 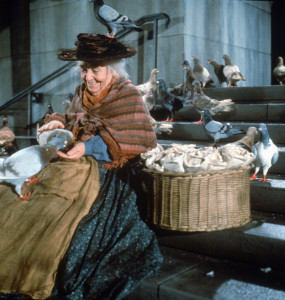 Mary Poppins meets a majority of Anton Karl Kozlovic’s structural characteristics of the cinematic Christ-figure. The characteristics that support her lofty position include her tangibility, her central position in the film, and her move from the outside to a position of centrality (that is, her message becoming the norm). [4]  Mary Poppins’ “divine” descent and ascent to the heavens via her umbrella, her role as a nanny (and therefore a commoner in society), and her super-human abilities also highlight her position as a Christ-figure. However, her presentation of “Feed the Birds,” a “song-parable” reminiscent of Christ’s parable about the birds and lilies of the field, argues most for her status as a Christ-figure, and can be seen as a plea for Christian love that reflects charity.

As Poppins sings, she twirls a snow globe filled with birds, and, as the children gaze into the globe, they see the saints and apostles smiling at the charity of the Bird Woman. The next day, rather than investing their tuppence in the bank, the Banks children choose charity and feed the birds.  While this choice gets Mr. Banks fired, he is reunited with his family. Once he understands the message of charity, Banks is called back and promoted.  Mary Poppins introduces charity into the Banks family through the song “Feed the Birds,” and this intervention “saves” the Banks family, especially Mr. Banks. [5]

Through the divine intervention of Mary Poppins, the first identified female Christ-figure of modern American film, the Banks family is saved and the Christian message of charity is revealed to the audience through the song, “Feed the Birds.”  Even Dick Van Dyke professed that “Feed the Birds” was one of the most touching songs in film history and admitted he still cried when he heard it. [6]

On Walt Disney’s 100th birthday, Richard Sherman was invited to play at a Walt Disney statue dedication at Disney Land. After he played Walt’s favorite song “Feed the Birds,” Sherman blew a kiss to the statue and wished Walt Disney a happy birthday. When he finished, others told him a lone bird had flown down right over the piano where he had been playing and then flew right up toward the clouds.  In an interview, Sherman said, ‘That was Walt saying, “Thanks.”‘ [7]