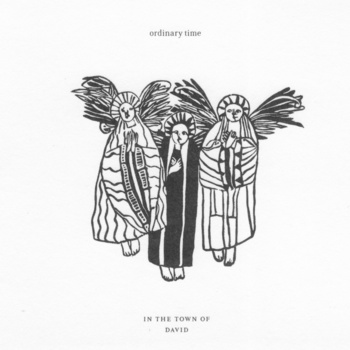 The Christian season of advent begins today, so it seems appropriate to feature a band with a really excellent Christmas album.  I aquired Ordinary Time’s album In the Town of David several years ago, and it remains one of my favorite Christmas CDs from a contemporary band.  The album is a mixture of original scores and traditional hymns. I love listening to In the Town of David during the advent season because it not only draws me into the story of Christ’s birth, but also into the mystery of this remarkable event.  One particular feature of this album that I like very much is the way they present a few songs (eg. “Mary’s Song,” “The Shepherd’s Song,” and “Simeon’s Song”) from the perspectives of the characters in the nativity story.  I find that these songs help me to enter imaginatively into a story that I have heard so many times in new and fresh ways.  If you enjoy the pure acoustic sound of excellent folk music, you will be hardpressed to avoid purchasing this CD.  We are not able to stream music from our blog, but you can buy and listen to the entire album HERE.

Below I have included an excerpt from Image Update’s review of In the Town of David.  You can read the full review here.  And below the review, I have also included the lyrics to “The Shepherd’s Song.”  Enjoy!

In the Town of David possesses all the characteristics of a well-worn Christmas favorite: warmth, a sense of the holy, and an embodiment of tradition… The CD is an intimate, nearly hour-long session of songs for—though not limited to—the Christmas season. With consummate skill, Keyes, La Grand, and Zimmerman take turns on lead vocals, pass their instruments around, and create harmonies with a simple beauty one might expect of a fireside performance….  One of the album’s greatest strengths is the timelessness of its lyrics and music; split evenly between original material and traditionals, the listener often needs the liner notes to tell the difference. In knowing the roots of their art—the tradition of sturdy songs built on the lineage of folk, Americana, and blues—the trio has created an album bearing an historical patina. This sense of timelessness, then, has about it something that connects present and past, thus enabling a future trajectory. One imagines a listener in 1930 would have enjoyed the songs as much as one in 2007.  And one hopes listeners in years to come will feel the same.

We pressed our faces to the grass
Eyes to earth, but found no shade.
Such blinding light was not the sun
Seized with fear but not to run
A fear that made our fears afraid.

“Do not, do not be afraid
Today is born the Lord your Savior
Don’t look in a prince’s nursery
But in the barn where cattle feed
Peace on whom HE favors.”

We left our flocks to tend themselves
And ran all night how far, how fast!
He called us past hotels and bars
Shepherds, wise men, even stars
Back to…himself… again… at last.

Is this the long expected one,
The one in whom we must believe?
Can this be Israel’s future King,
The one that made the angels sing?
Will he ever be received?