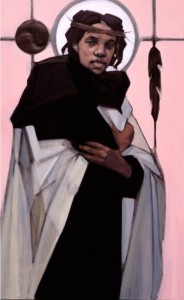 On October 18, 2011, I had the privilege of attending an exhibition at the Loyola University Museum of Art, titled “Holiness and the Feminine Spirit: The Art of Janet McKenzie.”  I had previously been ignorant of her work, and went at the invitation of a friend.  Upon arriving I learned that the artist herself would be present in the evening to talk about her paintings.  I don’t believe that I can adequately articulate how transformative an experience this was for me, nor can I do justice to the sacred art and the beautiful artist, but I will do my best to convey something of what her paintings and her presence evoked in the depths of my own soul.

In all of Ms. McKenzie’s paintings – mostly oil on canvas, with one notable exception being oil on wood – the people she represents, whether Madonna and Child (a common theme), Jesus, Mary Magdalene, Mary and Elizabeth, or ordinary people reflecting the divine image, the beholder sees, on the one hand, a sense of the primal woundedness that strikes deep in the heart of every human person, and indeed collectively in humanity as a whole.  At the same time, however, her figures present themselves in a quiet grace, a strength and holiness that bring those wounds into contact with the powerful healing of the divine encounter.  Our woundedness itself becomes the hallowed ground of Christ, and the soul of the gazer becomes the garden covered in the blood-sweat of Christ in all his suffering beauty.  It is precisely this beauty that transforms the person who enters into Ms. McKenzie’s art.

One of the most striking features of so many of her paintings are the eyes of the subjects.  In paintings such as “Jesus of the People”, “Mary Magdalene with Jesus, the Christ”, “The Keepers of Love”, and others, we gaze into eyes that are soft and kind, yet in that kindness speak a truth that perhaps we do not wish to hear.  They are the eyes of people who are marginalized, oppressed, and these eyes force us – forced me – to ask, “Have I oppressed you?  Have I marginalized you?  Have I not respected the dignity of your person?” Precisely in that unblinking and unchanging gaze, a gaze from the depths of the eternal Truth, I was forced to answer a question I would have been much more comfortable avoiding.  It was in the light of that unchanging gaze that I myself was changed.

Perhaps because of the power of these eyes, those paintings whose eyes are turned away gained that much greater significance.  In “Woman Offered,” the aforementioned oil on wood painting, it is as if this woman knew that her strength would overpower me if she dared look into my soul, and so it was compassion that turned away her glance – compassion for her oppressor!  She indeed was Christ to me, and like Peter all I could do was weep bitterly at my betrayal, and pray that my tears and her offering might cleanse me of my sin and bring true justice to my heart.

Ms. McKenzie herself was in fact the very image of what she paints – humility embodied, beauty and grace that comes from a deep place of encounter with God.  She is an artist, yes, but perhaps more importantly she is a mother who deeply loves her son, offers herself for him, a love which emanates from the divine source and overflows both into her art and into the words she speaks.  In her talk, she began by apologizing for being a poor public speaker, and then proceeded to keep us hanging on every word.  Her presence and the art she shares with the world are a reminder to me, and hopefully to all, of the transforming power of beauty in our suffering world, and how the work of a gifted and prayerful artist can indeed contribute to our collective redemption.

Michael Hallman is an Augustinian friar and student at Catholic Theological Union in Chicago, IL.  He is a poet and freelance writer.  He may be contacted via e-mail at augustinianheart@gmail.com.

Images used by permission of the artist. View her work at http://www.janetmckenzie.com. Janet McKenzie can be contacted at jmckenzie2000@hotmail.com.

Michael Hallman is an Augustinian friar and student at Catholic Theological Union in Chicago, IL. He is a poet and freelance writer. He may be contacted via e-mail at augustinianheart@gmail.com.