J.A.C. Redford is a composer and orchestrator with dozens of Hollywood film and television scores to his credit. His recent collaborations with Thomas Newman include The Iron Lady, The Help, and Wall-E; his work with James Horner features such titles as the upcoming Romeo and Juliet, The Amazing Spider Man, The Karate Kid, and Avatar. 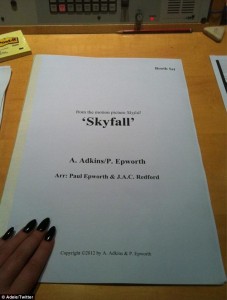 Last fall, Redford contributed substantially to the score and title track of James Bond 23. Skyfall has garnered a Golden Globe and multiple nominations including two Academy Awards. Propitiously, Redford was in St Andrews when Adele leaked the photo below, and presenting at ITIA’s weekly postgraduate seminar the very hour Skyfall’s title track went straight to #1 on the UK charts.

Redford was presenting in St Andrews because in addition to his day job he is a prolific composer of sacred and choral music. He has written settings for the likes of Malcolm Guite (recording here) and C.S. Lewis as well as original pieces for choir and orchestra including the English liturgy and an oratorio on the Martyrdom of Polycarp.

The seminar presentation was a balance of Redford’s recordings and reflections. Despite pitching himself as an artist and not an academic, he did mention that his original work has been the subject of Master’s and PhD level research. His remarks on the relationship between music, performance, and theology were as provocative as the recordings themselves. Or, almost. It is unusual for participants to cry in seminar (PhD student presenters excluded), but many present were moved beyond steady emotion by the requiem piece Redford wrote for the tragic death of his sister-in-law ‘Rest Now, My Sister.’

Redford has generously provided Transpositions this recording of ‘Phantastes’, a fantasia for solo piano based on the story by George MacDonald. Click the link to view the Phantastes Program Notes.

All music referenced or linked is used with permission and subject to copyright.

You can read Micah Snell’s review of Skyfall here.

Fr Micah Snell is a PhD candidate in the Institute for Theology, Imagination and the Arts. His thesis is on theology and Shakespeare’s Romances. You too can join his exclusive cadre of Twitter followers.