Many of David’s sculptures, such as the one shown in the header, invoke the weightiness and density of the materials he uses.  He suspends many of his works in a moment of balanced tension leaving the viewer wondering what will (or even can) happen next.  David says the following about the theme of gravity in his work:

The function of gravity as both fact and metaphor is the central paradox of the sculptor’s creative process.  Under the sway of this aesthetic confluence, the objective viewer of a figure in space becomes implicated into the microcosm of the art work by means of a kind of metaphorical vertigo.  This visceral response is the essential persuasive mechanism of the medium of sculpture.

Gravity carries with it the sense of inevitability and inescapable regularity.  Often his human figures are caught in a problem that seems impossible, and we are there to witness the struggle, but we are unable to help.  The solution is never presented.  He offers us Sisyphus-like fables balanced in a moment that seems like eternity.  In this moment we are led to hope for impossible solutions: for the disruption and intervention of grace.

Another common theme in David’s work is the horse and rider.  In these sculptures, David stands within a long tradition of equestrian monuments.  As a public scultpure, the equestrian monument typically is a symbol of political power and triumph.  David’s equestrian sculptures take on a greater depth of meaning as they explore the complex story of humanity’s relationship with the animal world.  He writes the following about the equestrian motif:

The equestrian monument prevails in endless variety across the history of art.
In a time before I had learned of their often violent and imperial past, with the eyes of a child I saw these archaic bronzes in their simplest and most mythic form: full of narrative, free of history.  This first impression has stayed with me as I find myself returning time and again to the unraveling and reprising of the equestrian theme in my own artwork. Now thoroughly out-moded, and thus freed of its political harness, I periodically inquire after this troubled partnership of man and beast as they wander the imagination – a vivid motif in search of a better story.

Much of David’s recent work explores paper as a sculptural medium.  Although this is a departure from his more ‘solid’ materials such as bronze and steel, many themes in his older work have been carried over into this new medium.  The human figure, especially, is consistently developed in all of David’s work.  His new paper sculptures have an even greater sense of immediacy and materiality.  The paper itself takes on a visceral fleshiness that draws attention to the embodiedness of the human person. 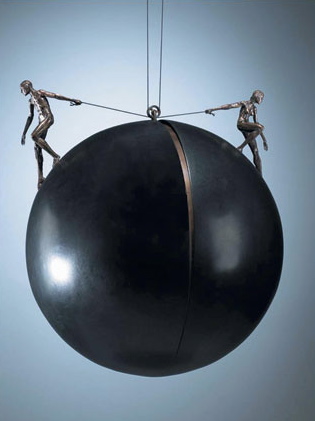 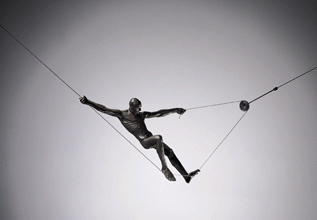 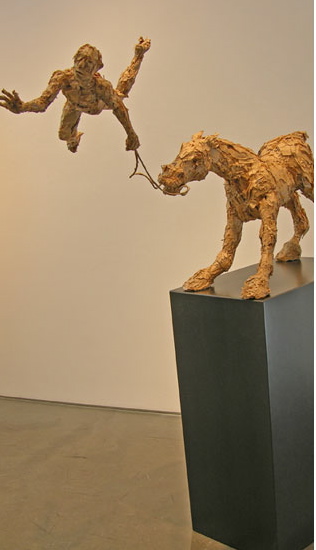 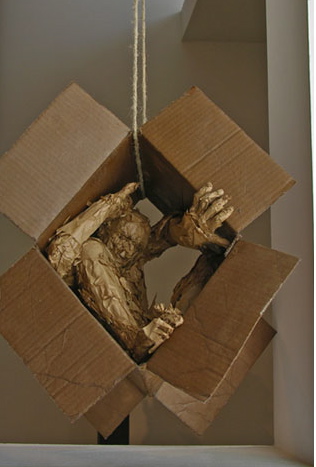