Typically, when Transpositions features an artist, we try to offer a few words regarding the artist’s work as a whole. In this case, however, we have chosen to feature David Mach because of his current exhibition at the Edinburgh Art Centre titled Precious Light (30 July – 6 October 2011). Mach produced the work for Precious Light in response to the King James Bible, and so it is very appropriate to feature his work to kick off Transpositions’ symposium on the King James Bible.

Here are some statements from the official press release for the exhibition:

Featuring a dramatic depiction of the crucifixion at Calvary, sculptures made from match heads and coat hangers, and his trademark witty and intricate approach to collage, Precious Light represents David Mach’s largest solo exhibition to date. Over three years in the making, it will feature over forty works by the Turner-nominated artist along with Mach’s entire working studio, installed in situ for the duration of the exhibition.

At the heart of the exhibition, the entire third floor of the gallery will be transformed into a working artist’s studio where visitors will be able to view Mach and his team as they work on a colossal decoupage The Last Supper. The finished work will be unveiled on 20 September at a Last Supper event, along with a burnt match head sculpture of Jesus.

A further floor will be dedicated to the history and language of the King James Bible. A range of historic Bibles, including Tyndale, Geneva and King James Versions, will chart the development and evolution of the English-language bible as well as Scottish influence in Biblical translation worldwide. A reading area and an audio-visual presentation will allow visitors to further explore the text.

I have been to Precious Light, and I can tell you that it is well worth your time. On entering the exhibit, one is immediately confronted with the colossal sculpture Golgotha. These larger than life crucifixions are impressive, and the bodies are made entirely of coat hangers. I have written a previous post on another of Mach’s coat hanger crucifixions, Die Harder (below), here.

The coat hanger crucifixions are impressive, but the collages steal the show. Like the crucifixions, the collages are immense, and they are filled with intricate and complex layers of work. Each collage depicts a biblical theme or event, and the most interesting feature of these stunning images is the way that they bring that biblical theme or event into a contemporary setting. For example, the nativity takes place outside Florence, and the Egyptian plague of frogs is juxtaposed with a car bombing in Belfast (below).

There is much in Precious Light that will be of interest to any student of the relationship between Christianity and the arts. There is much that the Christian may find of devotional value, even if Mach himself may not share that same religious devotion (see a visual meditation that I wrote about Die Harder). But I would like to leave you with one further point to ponder: the relationship between Christian devotion, art and sensationalism. When I went to Precious Light, I was ‘blown away.’ It is an immense exhibition in its scope and in the size of the pieces themselves. There is much in Mach’s work that will appeal to a wide audience; there is a certain kitch-i-ness about his style (the devil head is a good example). And so, it seems to me, that the question is open as to whether Precious Light really draws its viewers deeper into the biblical text, or whether viewers will be dazzled and delighted by a spectacle, or whether both are possible at the same time. I won’t be drawing any conclusions here, but I would love to hear your thoughts if you are able to attend Precious Light. 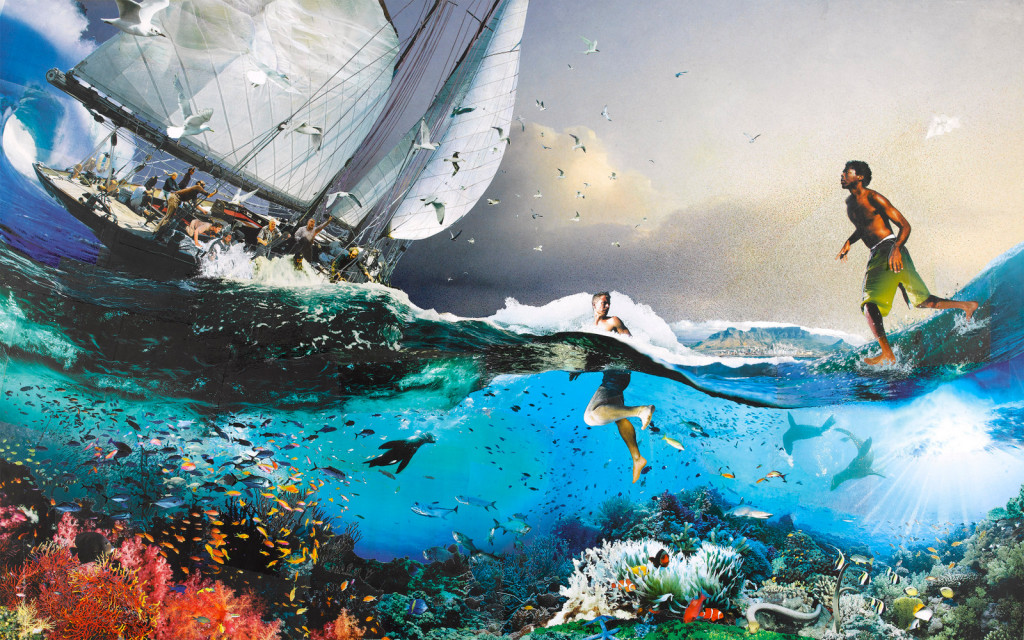 "The Plague of Frogs"

Editor’s Note: In this 2-part series, Jesse Nickel considers violence in the films of the Coen Brothers. The first part will posted on Monday…