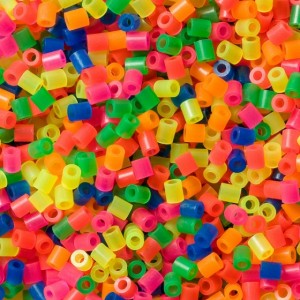 Recently a friend came over to our house for a visit, bringing her preschool daughter to play with our three year old son William Blake. Cars and cookies were both on the agenda, but eventually they started in on an art project involving beads. All was well on this particular playdate until Anne happened to dump the entire bucket of colored beads onto the living room rug, burying William’s project in the process. Not surprisingly—since no one likes to have their art wrecked—there were, in my wife’s words, “a lot of howls.” Yet the next day William surprised us by digging out the frame he had been using and cheerfully starting over. He came into the kitchen to show me his work-in-progress, declaring that his new design would be exactly different.

This was not a philosophical statement so much as a happy instance of the accidental profundity with which children’s words are often graced. I took him to mean that he was setting out with the same intention, the same joy, the same hope of making something new, as before. Only the final result would be distinguish this work of art from its unrecoverable predecessor. It would be exactly different.

For the child and the artist, cheerfully beginning anew provides a constructive way of dealing with the disappointment we face when things do not go according to plan. More broadly, the practice of starting over may deepen our understanding of the medium or the material we are working with. It promises to increase our artistic skill and train us in the patience necessary for excellence.

In this connection I am reminded of a conversation I had a few years back with Tony Wood. Tony is an accomplished lyricist who has made a living for many years in Nashville. He has a remarkable knack for expressing deep truths in simple, natural language.

We were talking about the state of the Christian music industry, and I was lamenting the fact that, under the terms that govern most industry publishing deals, an awful lot of well-crafted songs will never be heard by anybody outside of a small circle of insiders. Tony’s response surprised me. Like most pros he was less romantic and more practical. Yes, writing songs was a calling, an act of ministry in service to the wider church, but for him it was first and foremost a job, and that meant coming in every day to write from 9 to 5.

In the sphere of artmaking, aiming to create something “exactly different” means showing up and starting over every day, whether one feels like it or not. It means pressing on in the face of unforeseen obstacles, untimely interruptions, and the occasional dumped bucket of beads. To aim for the “exactly different” is at some basic level to acknowledge that we can’t dwell on past disappointments or allow them to steal our joy. We can build on our best ideas and intentions, even when they haven’t yet taken shape in the ways we hoped or envisioned. Each new day brings new colors to combine, new patterns to piece together, new ways of weaving words together. Like his namesake, my son William Blake seems to know something about this already. Here’s hoping he won’t forget it as he grows.

Bo Helmich is currently Assistant Professor of Worship Leadership at Huntington University. He is also a doctoral student in the ThD. program at Duke, where his research has focused upon theological aesthetics and the Reformed tradition.

Dr. E. John Walford is Professor of Art History at Wheaton College, Illinois, where he has taught since 1981. He is author of Jacob…