Environmental art has become commonplace in today’s art world. Where we have constant threat to species survival, unpredictable weather patterns, or overuse of resources, artists have been keen to suggest alternative viewpoints, practices, or commentary on the way societies have acted, or should be acting, in regard to the natural environment. While there are numerous resources to pull from, I’d like to introduce you to the work of Marlene Creates, a Canadian artist who has dealt with issues of place and the environment throughout her 33-year-long art career. Through exploring Creates’ work, I will also suggest that environmental art, whether or not it speaks with a specifically Christian voice, can suggest possibilities or anticipations for a New Creation and our role within it. 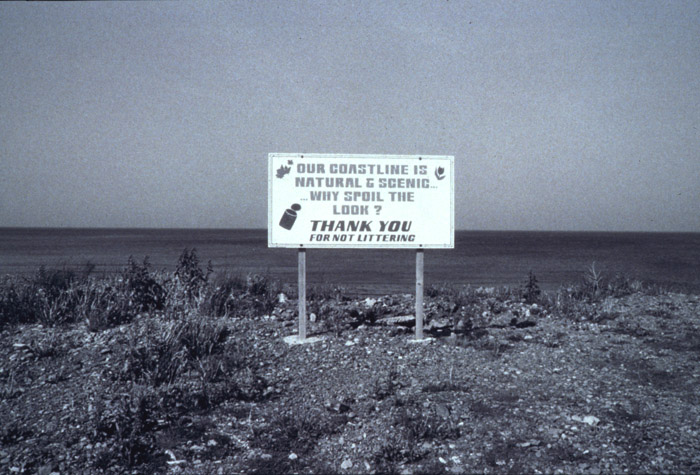 While all of Creates’ work deals with place or land in some way, I will concentrate on her series Language and Land Use (1993-94) and Dwelling and Transience (2000.) In both of these series, Creates approaches the ways in which our language about a landscape reflects our view of it. In both series, she photographs public signs that designate use of the land or place. By concentrating on public signs, she approaches the topic from a generalized standpoint, noting how societies or communities approach place compared to individuals.[1] “Her images of signs in place call our attention to the attention-callers, which often seem to operate at cross purposes with the surrounding landscape, which is left undescribed except by inference.”[2] Signs read things like “Our coastline in natural and scenic” (1994) and “Peeling Bark Kills Trees” (1994), and reveal instructions for our perception of the place or the intended use of the land. In the former, the photograph reveals trash around the sign; the artist also learned the beach was actually a man-made construction, revealing the fact that the coastline is neither natural nor particularly scenic.

The signs, however, draw attention not only to the “attention-caller” but also insinuate the activity of the subject of the sign (or the person for whom it was intended). Perhaps bark is actually often peeled from trees, and the sign here reflects a desire to change behavior. Either way, Creates’ photographs signal the multiplicity of ways in which people “make the place” what it is and the competing attitudes that indicate the current land use and perception. She provides no judgment but merely calls attention.

In Dwelling and Transience, Creates photographs signs that indicate the coming and going of people, particularly tourists in Greater Victoria. While Creates has always been interested in a sense of belonging in place,  rather than questioning residents about their particular relationship to the place, this series lets the signs speak for the residents’ real and hidden relationships to it. The sign is in central focus in all of her compositions, and the natural landscape, to which the signs often point and to which most other landscape art would normally call our attention, recedes into the background. As a result, we read the landscape in the background through the sign. For example, one sign suggests, “No person may sleep overnight in any vehicle in the park”, and this affects the way we view the green vista behind it. This series presents a complex relationship between dwelling and transience. While the signs often depict a coming and going, the erected monuments around the town suggest a more permanent presence that functions in conjunction with a more mobile world.

So, what does this have to do with anticipating the New Creation? The photographs certainly call our attention to current land use and environmental issues, but can we read anything else into them? Do they suggest something deeper about human construction within a landscape and how that might affect our future relationship? I think so. Creates’ work reflects the nature of human placemaking and suggest that we have a real impact on and relationship to the landscape. Whether the artist reveals a Christian understanding of this or not, as Christian viewers, I think environmental artworks will naturally call our attention to the ways in which we interact with our landscape. And if we see a weakness in our approach to place, we may be called to change our habits and directions. We may be called to “dwell” in place despite living in a more transitory world. We may be called to adjust our consumption of natural resources to live in harmony with the creation rather than lords above it. The landscape, in this sense, becomes not just the place we live in, but a very real part of our community. This no doubt speaks to the ways in which we might anticipate or contribute to bringing about a truly “new” creation.

[1] For her work on individual experience of place and place-mapping, see her series Places of Presence: Newfoundland Kin and Ancestral Land, Newfoundland, 1989-91.

Photo credits: Both photographs are from the artist’s website: http://www.marlenecreates.ca/index.html

The folks over at ArtWay have graciously allowed me to re-post a visual meditation that I wrote for them several weeks ago. ArtWay is…