Editor’s Note: Transpositions is currently featuring a 3-part series on Art Prize by guest contributor, Chris Brewer. Brewer started with an introduction to the competition (published 11 April), followed by his suggestion of a storied theology of the arts as a way by which to engage Art Prize (published 18 April). The series concludes with two vignettes from Art Prize 2011 (published 25 April).

To conclude my series on Art Prize, I offer two vignettes. The first, Alfonse Borysewicz at the Basilica of St. Adalbert, was an attempt to engage Art Prize through a particular local church. The second, Art that Tells the Story, took a different route, one that resulted in a very different outcome.

Alfonse Borysewicz at the Basilica of St. Adalbert [exhibition slideshow]

The Basilica of St. Adalbert’s patina-ed copper domes dominate the northwest Grand Rapids cityscape.  It’s the only “Minor Basilica” in the State of Michigan, and what’s more, it falls within the Art Prize boundary.  Thinking that it would be good for Alfonse to connect with the Basilica I contacted the church leadership to see if they might be interested in mounting an Art Prize entry. They were interested, but unfortunately the deadline to register as a venue passed and, for whatever reason, they neglected to register.  Alfonse asked if he might exhibit in spite of this.  The church responded favorably, and so we installed his “Dormition” for an exhibition that ran from the feast of the Assumption through the end of Art Prize.

In one sense, the exhibition was a triumph. Borysewicz, a contemporary artist and Roman Catholic of Polish descent, exhibited in a prominent Roman Catholic Church with Polish roots in his home state. And how often do churches show the work of a contemporary artist, let alone someone like Borysewicz whose work has been reviewed by The New York Times, Art in America and Art Forum?

On the other hand, the exhibition failed to engage with Art Prize. Not having registered, nor having attempted to engage the church or community by way of an opening exhibition, artist reception or press release, the exhibition seemed to go mostly unnoticed. The priest did mention that it had been helpful for meditation, which is no small thing, but what of engaging Art Prize? Was this Christ against culture by default? And if it was, would it have merit as such? Perhaps it would, but it certainly wasn’t my intention, and so we started from scratch. 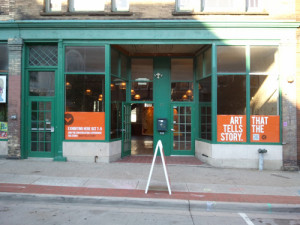 The genesis of this effort was an Art that Tells the Story planning session with a couple of friends, my wife and several folks from Grey Matter Group and Somersault. Towards the end of the meeting, someone asked if I had thought about participating in Art Prize. I had, but wasn’t sure how to pull it off. Within a week the guys from Grey Matter had secured a space for the final weekend of Art Prize (October 7-9) in the heart of the city on the Avenue for the Arts.

We cleared and cleaned the space, installed the work and put out our sign.  I expected that the event would draw area hipsters and art students, but given the location’s proximity to the local homeless shelter, the first three of our more than four-hundred visitors that weekend were at the opposite end of the socioeconomic spectrum.  As we passed out cookies and water, and as Bob, the building’s homeless handyman, walked around the pieces, Matthew 25:35 came to mind: “For I was hungry and you gave me something to eat, I was thirsty and you gave me something to drink, I was a stranger and you invited me in.” (NIV)

Borysewicz’s Emmanuel I: Bethlehem, Emmanuel II: Jordan River/Galilee, Emmanuel III: Jerusalem and Emmanuel IV: Alpha and Omega had been installed as a suspended cube, conjuring images of the tabernacle and the New Jerusalem.  There, the good news, God with us, was offered in three dimensions as a space, a sort of world where words became flesh, a space into which the stranger was welcomed, a shared experience within which created goods were affirmed and redemptive words spoken, a foretaste of things to come.  Engaging Art Prize?  Indeed.

What value is there in the Church engaging events like Art Prize?  What of Matthew 25:35-36?  How might that text inform our evaluation of, or notions of engaging, Art Prize, an event that brings art to the people?  More generally, how might it inform our notions of exhibitions and their spaces?

See my video interview with Alfonse.