Editor’s Note: Over the next three Wednesdays, Transpositions will feature a 3-part series on Art Prize by guest contributor, Chris Brewer. Starting with an introduction to the competition (published 11 April), Brewer suggests a storied theology of the arts as a way by which to engage Art Prize (published 18 April). The series concludes with two vignettes from Art Prize 2011 (published 25 April). 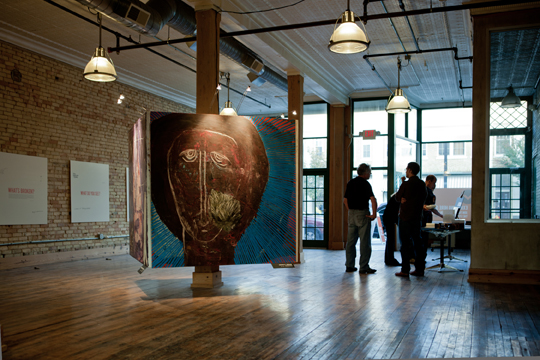 Art Prize is a radically open, American Idol-like art competition that is part arts festival, part social experiment, and decided solely by a public vote. For two weeks or so, any property within the Art Prize boundary, a three-square-mile area of downtown Grand Rapids, MI, can become a venue and select one or more artists for exhibition. What’s more, Art Prize gives away the world’s largest art prize: $200,000 for first place. The event was unveiled by Rick DeVos – grandson of Amway co-founder Richard DeVos, #176 on Forbes’ list of the world’s billionaires – in 2009.

All this being said, the competition has caused quite a stir, popping up everywhere from The New York Times, USA Today, and The Wall Street Journal to the Acton Institute’s Journal of Markets & Morality in a debate between Nathan Jacobs and Calvin Seerveld (see Seerveld’s Surresponse). More recently, Grand Rapids was named one of eight North American cities experiencing an artistic boom, due in large part to Art Prize. It has, of course, raised the usual questions (e.g., What is art?), as well as conversations having to do with everything from the economic benefits to urban revitalization.[1]

New to this year’s competition is a $100,000 Juried Grand Prize, a call for curators to select artwork for city park venues and a $20,000 Outstanding Venue Award. The Outstanding Venue Award joins four other $20,000 juried awards: 2-D, 3-D, Time-based and Best Use of Urban Space. These awards evince a gradual shift away from the general public and towards the guild, which is understandable given the general public’s proclivity towards that which is nothing but large, time intensive or just plain kitsch, to the neglect of works that are good, beautiful and true.[2]

On a related note, to what extent should the guild shape the outcome of Art Prize? What are the effects, positive or negative, of reinforcing artistic behavior with such a large cash prize or any cash prize for that matter? And what criteria should be used, whether by public or guild, to judge these artworks? Is Art Prize responsible for providing, in addition to the opportunity for engagement, education along these lines (i.e., criteria for voting) and if so, what might that look like?

Shifting gears a bit, how might the Church engage Art Prize? And how should we respond to a piece like Mia Tavonatti’s “Crucifixion,” the Art Prize 2011 1st place winner?

How should we respond to these and other questions?  When in doubt, start with creation, and that’s exactly where we’re headed in Part 2: A Storied Theology of the Arts.

In Part II, I consider those who identify the image of God with creativity as an aspect of the human being. What are the ethical implications of comparing divine and artistic creativity from this perspective?