Editor’s Note: Transpositions is currently featuring a 3-part series on Art Prize by guest contributor, Chris Brewer. Brewer started with an introduction to the competition (published 11 April), and continues by suggesting a storied theology of the arts as a way by which to engage Art Prize (published 18 April). The series concludes with two vignettes from Art Prize 2011 (published 25 April). 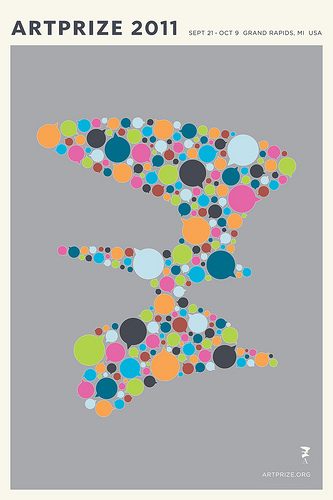 As creatures created in the image of a creative Creator God, we both receive and exhibit creativity. When we do so, we simultaneously give glory to God and offer it as gift to our fellow human beings who then respond (i.e., to God’s creation and our own) in like fashion ad infinitum.[1] As part of God’s very good creation, these initial and responsive creations need no external justification, no particular use. They are free to be useless.

In his Foreword to Art that Tells the Story, Makoto Fujimura states:

Art and poetry provide a true paradox in consideration of their validity for existence. We cannot use the arts anymore than we can use a human being. Art can be, and often is, utterly useless. It can be ephemeral, confounding, non-linear. But precisely because they are useless and ephemeral, the arts fundamentally define our humanity. The arts, in other words, are essential, and useful, because they are useless.[2]

In addition to recognizing art as created good (i.e., useless), then, we recognize it’s usefulness, and what’s more, a particular use: art’s potential to be a redemptive word. Some may object that this sort of use is a sort of propagandizing, but it need not be propaganda so long as it maintains its mooring (i.e., as created good). In this sense, art can function as a sort of wisdom tradition – a commonly observable, shared experience – where oil and canvas or some other medium stand in for the sun, wind, water and time (Ecclesiastes 1:4-11).[3]  Especially interesting along these lines with regard to Art Prize is the 2011 poster where conversation bubbles form Alexander Calder’s “La Grande Vitesse,” a 42-ton sculpture and symbol of the city, on end (see above).

And so it’s not either-or but both-and.  Because we live in a fallen world, created good apart from redemptive word quickly devolves into hedonism; redemptive word apart from created good is nothing more than propaganda. Taken together, however, they provide a rightly Storied theology of the arts and a proper framework from which we might engage Art Prize (and the questions raised in Part One).

What is Art Prize all about?  According to Rick DeVos, it’s about “building a creative culture in West Michigan,”[4] a culture of conversation, if the poster is any indication.  And how might we participate?  Well, for starters, we should recognize the DeVos’ efforts for what they are and create instead of critique, and this in an effort to cultivate their creation (i.e., Art Prize as event) in a collective effort to embrace art as created good and redemptive word.  And how should we do that?  That’s a good question; one that should lead to an interesting conversation.

In part three I’ll be sharing two vignettes, my own efforts, from Art Prize 2011: Alfonse Borysewicz at the Basilica of St Adalbert and Art that Tells the Story at Art Prize.

[1] On receiving, see C.S. Lewis, An Experiment in Criticism (Cambridge: Cambridge University, 1961), 19, 88.  The response that I describe is, of course, before the Fall.  For a fallen response, see Romans 1:18-32.
[2] Makoto Fujimura, “Foreword,” in Christopher R. Brewer, ed., Art that Tells the Story (Grand Rapids: Gospel through Shared Experience, 2011), 12.
[3] For more on creating and cultivating alternate wisdom traditions see my “Creating and Cultivating Alternate Wisdom Traditions, pts.1” and “Creating and Cultivating Alternate Wisdom Traditions, pt.2.”
[4] Matt Vande Bunte, “Rick DeVos: Art Prize is not about who wins, ‘I just want to see crazy crap all over Grand Rapids’.