‘There really is no such thing as Art. There are only artists.’ [1]

With these two provocative little sentences, E.H. Gombrich begins his famed book, The Story of Art. It is a surprising way to begin a relatively comprehensive guide to Western art. Gombrich’s view could be described as a species of nominalism (i.e., a metaphysical view that claims there does not exist an abstract reality called “Art” to which particular objects correspond). But this is beyond our range here. Instead, I simply point to the fact that Gombrich famously makes this claim because he wants to make two things clear. The first is that Art with a capital A does not exist. “Art with a capital A,” he writes, “has come to be something of a bogey and a fetish.” It is an illusion – often an elitist and bougie illusion – to believe that there is some universal standard by which we can assess the value or beauty of objects through the ages.

It is important to note that he only denies the existence of Art, not art. And so, the second thing that he is saying in the introduction of The Story of Art is that art with a lower-case “a” does exist. This is true, of course, bearing in mind that “art” is a fluid notion, meaning different things to different people at different times and places. I believe Gombrich would think (and I am tempted to agree with him), that everything may be art, or nothing may be art. This begs the question: how are we to decide what is or is not art? Is it: the subject represented? the degree to which the subject is represented “realistically”? the artist? the intended purpose? how it is received? the feeling it inspires? the impact it has? I think the answer to the question is this: it just really depends.

I bring all of these lofty philosophical and aesthetic questions up, not because I enjoy asking questions I cannot answer (can anyone?), but because the question of ‘what constitutes art?’ and, more to the point for our purposes here, ‘what constitutes religious art?’ helps frame an encounter with one particular painting: Thomas Eakins’ The Crucifixion. The question I am interested in asking is this: is Eakins’ Crucifixion an icon for veneration and prayer or is it more of a detailed anatomical illustration better suited for a medical textbook? Put differently, is it a study in religion or a study in how to paint? These questions will make more sense as we consider the painting’s reception history. 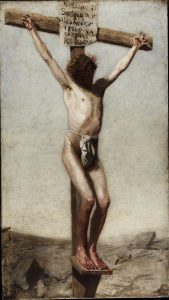 First, a little background on Eakins and his well-known painting. Thomas Eakins (1844-1916) was an American artist and he is considered to be one of the country’s greatest painters. Eakins was born in Philadelphia and received most of his training there although he did spend a few years in Paris and a brief time in Spain. After his brief stint on the continent, Eakins returned to the City of Brotherly Love to teach and create art for the rest of his life. He is generally considered to be part of the 19thcentury art movement called Realism, which is known for attending to mundane, “real life” subjects in a straight-forward, non-stylized, “realistic” way. His Crucifixion is a fine example of this artistic movement.

Eakings completed the The Crucifixion in 1880 and it is on display at the Philadelphia Museum of Art. Spanning 8-feet tall by four-and-a-half-feet wide, the imposing painting of oil on canvas really feels massive. It is Eakins’ only painting with a religious subject. The canvas is filled with Jesus’ exposed, stretched, bent and bloodied body nailed to a cross.

Given the subject and the painfully realistic style in which it was painted, people did not quite know what to make of the painting. On the whole, the initial reception was almost uniformly negative. Here is a fairly representative critique written by a reviewer from The Chicago Tribune:

Thomas Eakins’ Crucifixion is a large canvas representing a horrible form of death in a most ghastly and horrible manner, and it may well be doubted whether such a picture serves any good purpose outside of the classroom of an art school. The only emotion inspired is one of horror at so grim and pitiless a representation of torture and death. Whether the work is well done technically or not is hardly worth considering; one does not care to examine it closely enough to find out. [2]

The response to the painting was consistent: the critics and crowds were scandalized. Ever undeterred, Eakins was eager to show the painting in major cities around the country and it ‘sparked controversy wherever it was exhibited.’ [3]

There are two main reasons why the critics and the crowds disliked the painting. The first has to do with Eakins’ realism. To render the crucifixion as realistically as possible, Eakins tied one of his students to a wooden cross on the roof of his art studio in order to capture the stress and strain of the human body hung on the instrument of torture. The tactic seemed to work. It was so believable people could hardly look. The viewers considered the depiction of Christ to be too real, too raw, too gritty. It was inappropriate, unbefitting of the subject. ‘Christ deserves a bit more reverence’ was the general tenor. The second reason why the painting was not well received has to do with Eakins’ failure to follow the conventional treatment of the crucifixion in Western art. The most glaring transgression is his omission of the side wound where Christ was speared (John 19:34). By forgoing the spear wound, Eakins is breaking the rules for representations of the crucifixion dating back to the Early Christian era. [4] It did not fit the paradigm for properly religious art. The painting was too realistic and unconventional to be edifying. People did not like it.

I happen to like it very much. Interestingly enough, the reason I appreciate the painting is for the same reasons most people hated it. In response to all the negative press, one of Eakins’ friends responded with this defense of the painting that touches on why I find it so captivating:

Whether or not Mr. Eakins’ picture is not approved, in comparison with other treatments of the subject, would appear to depend upon whether the spectator has ever conceived, or is willing to conceive, of the Crucifixion as an event which actually occurred under certain understood conditions. Certainly, if that event meant all that Christendom believes and has for centuries believed it to mean, it would seem that, if it is to be represented at all, the most realistic treatment ought to be the most impressive. [5]

I think this is absolutely right. It strikes me that there is a correlation between the reception history of The Crucifixion and the reception history of the crucifixion. Because I am convinced that ‘Crucifixion was an event which actually occurred under certain understood conditions,’ I am enraptured by the painting because of its realism and unconventionality. The painting draws me into what has become a familiar scene in new and fresh ways.

I will first take up Eakins’ disregard for the rules of representing the crucifixion. Though some consider it blasphemy to break with conventions of religious iconography, I think Gombrich is right when he argues that ‘it was usually those artists who read the Scriptures with the greatest devotion and attention who tried to build up in their minds an entirely fresh picture of the incidents in the sacred story.’ [6] Though Eakins was most likely agnostic, the painting indicates he was a careful reader of Scripture. This is why Eakins omits the spear wound. Milroy brilliantly makes the case that Eakins intends to freeze the execution scene ‘at a specific instant of narrative time.’ That time is the precise moment that Jesus dies. She makes the case that it even corresponds to a specific verse in John’s Gospel: ‘When Jesus had received the vinegar, he said, “It is finished”; and he bowed his head and gave up his spirit’ (John 19:30). Jesus just breathed his last and the Roman soldier had not yet pierced him. The moment of Christ’s expiration is recorded and Eakins is confronting the viewer with the first, freshest reality of Jesus’ death.

It is like the moment you first hear the news that a loved one just died. It is disorienting: Jesus actually just died. There is great theological and spiritual benefit in contemplating this. Why did this happen? What does it all mean? What does it mean for me?

This brings me to Eakins’ realism. He does not paint the cross away with symbolic euphemisms. This Christ does not boast a serene face as he hangs, dying of abject torture. The dust needs to settle before the resurrection. His representation of the scene is confrontational in a way that the cross demands. This, perhaps, is the best word to describe The Crucifixion: confrontational.

The painting is so large that Jesus appears to be life size. Jesus’ frame is set at a slight angle and it is fronted in the foreground, almost giving the illusion of breaking out onto the floor of Gallery 155. There is little else to speak of in the painting; all other elements of the crucifixion scene are cropped out. We see nothing of the other criminals crucified next to Jesus. Neither do we see the Romans or the Jews or the three Marys or the disciple whom Jesus loved. All we see is Jesus before an austere background of craggy rocks and a bleak horizon of ash.

Jesus is utterly alone in the wilderness. He is all alone, that is, except for the viewer. Everything is hidden and nothing is hidden. The viewer is alone with the crucified Jesus. This effect of being alone with Christ is facilitated by the powerful staging of the piece, something the Philadelphia Museum of Art is well known for. The painting is hung less than a foot off the ground so that the viewer is nearly eye-level with the crucified Christ. You could almost look into his eyes – that is, if Christ’s face was not obscured by blackness, the dark shadow of death. This makes it far easier to imagine yourself as one of the criminals crucified alongside Jesus than a worshipper in a church.

All of this brings me back full circle. What are we to make of this painting? Is Eakins’ The Crucifixion a religious icon or an anatomical illustration? It should be clear by now that although it may not easily fit into the paradigm for religious art, I am persuaded of its iconographic value.

For as long as we can remember, human beings, artists, have felt inspired, maybe even compelled to create works of art to grapple with the reality of the deepest aspects of existence. What is the ‘meaning at the heart of the world?’ Is it characterized by ‘the hidden, consuming glory of the Absolute’ or is it ‘ultimately meaningless’? In an ultimate sense, the crucifixion exposes this dilemma, bringing these two choices to the fore. Hans Urs von Balthasar articulates it in this way: ‘after the event of Christ’s cross, man is presented with a choice: hearing the cry of dereliction, he must ‘discern’ either hidden love (shown in the Father’s surrender of the Son) or the meaningless void.’ [7]

The viewer of The Crucifixion is confronted with these two choices. Does the cross reveal the most meaningful love or the most meaningless void? If this is not a worthy subject to contemplate, I do not know what is.