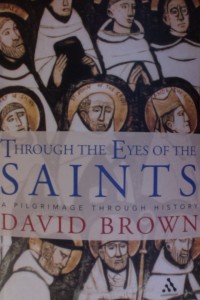 Editor’s Note: In this 3-part series, Christopher R. Brewer and Cole Matson consider Ed’s Story, a series of short films.  In Part 1, Brewer introduces the series via David Brown’s Through the Eyes of Saints.  In Part 2, Matson will discuss Ed’s Story as contemporary saint biopic.  Finally, in Part 3 we will be interviewing Steve Carr, executive director of Flannel.

In Through the Eyes of the Saints: A Pilgrimage through History,[1] David Brown, Wardlaw Professor of Theology, Aesthetics, and Culture here at the University of St Andrews, sets out “both to tell the story of the Church and to draw lessons from the lives of some of the major figures involved.”[2] Regarding these major figures (i.e., saints) and against N.T. Wright,[3] Brown argues that “Christ does not act alone; he was shaped by the communion of saints, most obviously by Mary his mother, and he continues to act through holy men and women.”[4] In the twenty-three chapters at the core of the book, Brown introduces the reader to a number of saints, Protestant as well as Catholic.

But what’s this got to do with us? Well, according to Brown, “temporal, spatial, and metaphysical distance between us and Christ can all be greatly reduced by close attention to such past lives.”[5] In what sense? Brown explains:

One undoubted advantage that the 2000 years of Christian history has over the Scriptures is its ability often to provide much closer parallels to the issues raised by our own lives. This is in no way to imply that the life of Jesus is irrelevant, but it is to acknowledge that it is often easier to think how his example might be applied in quite different circumstances if others had gone before us in trying to work this out in practice.[6]

In his insistence that “Christ does not act alone,” Brown sounds a bit like James Davison Hunter, the Labrosse-Levinson Distinguished Professor of Religion, Culture, and Social Theory at the University of Virginia, who more recently, and in a more general sense (i.e., with regard to culture as opposed to the person of Christ in particular), has noted: “the key actor in history is not individual genius but rather the network and the new institutions that are created out of those networks.”[7]

With Brown’s work in mind, and shifting gears a bit, I’d like to consider a contemporary saint of sorts. Ed Dobson is pastor emeritus of Calvary Church in Grand Rapids, Michigan, and the author of numerous books, including The Year of Living Like Jesus, and more recently, Seeing through the Fog: Hope When Your World Falls Apart. Oh, and Ed has ALS (aka Lou Gehrig’s disease).

And if it seems as though I’m playing fast and loose with the designation “saint”, we’d do well to return to Brown, who notes: “the presence or absence of the title ‘saint’ remained to some degree arbitrary, even after the process had been formalized at the end of the twelfth century.”[8] That said, Ed’s Story is worth considering.

Several years ago, Ed’s son and a producer approached Flannel, the Grand Rapids, MI based non-profit behind the NOOMA (Rob Bell) and BASIC (Francis Chan) films.  They wanted to do a biopic, a desire that has turned into a nine-part film series, five of the nine having been released, two more about to be released and two more forthcoming.  In the next post, Cole Matson will consider these films, as contemporary saint biopic.