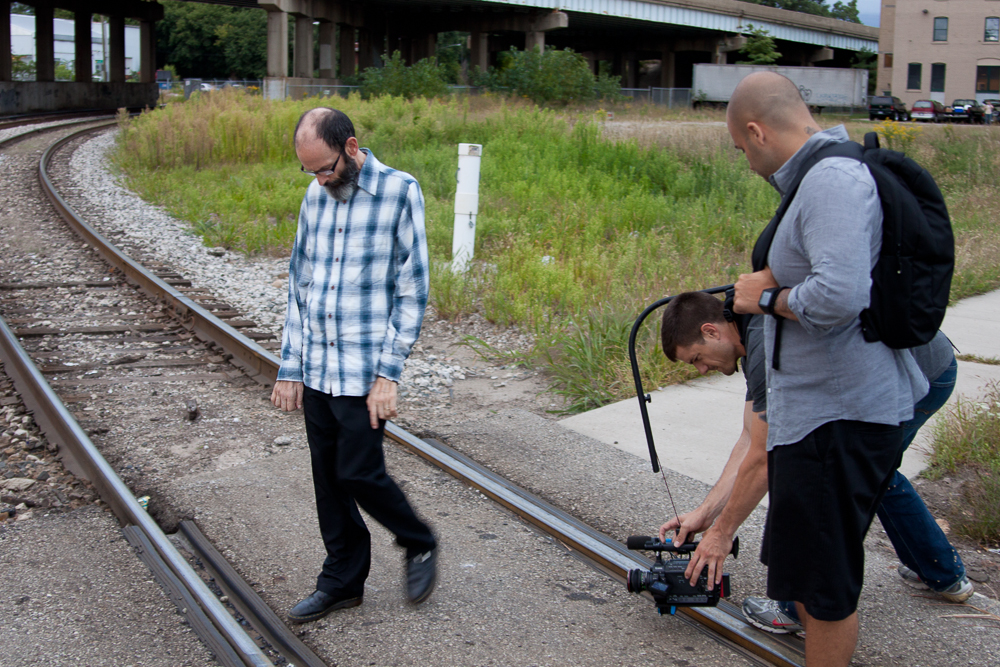 Editor’s Note: In this 3-part series, Christopher R. Brewer and Cole Matson consider Ed’s Story, a series of short films. In Part 1, Brewer introduced the series via David Brown’s Through the Eyes of Saints. Here, in Part 2, Matson discusses Ed’s Story as contemporary saint biopic. On Friday, in Part 3, we interview Steve Carr, the executive director of Flannel.

In my last post on film and saints, I wrote:

Film is an effective way of honouring a community’s heroes and saints. It can bring out the epic scope of a single life, underlining the immense dignity and responsibility of a single human being, or scale down to focus on the quotidian struggles and failures of a seemingly unexceptional life, thereby encouraging us to see our neighbours as brother and sister ‘saints of the everyday’.

Ed’s Story is a documentary about pastor Ed Dobson’s life with ALS (or Lou Gehrig’s disease). It is a story of a modern saint; a man of God who witnesses to God’s love, and models for us how to die well.

Though it revolves around one man, I was struck by how Ed’s story was told through his web of relationships with other people. There are moments where we see Ed alone – fingering a prayer rope, or sitting in his study – but mostly we watch him relate to others: his wife and son, his church, his friends. One important take-away from these videos, considered as hagiography, is the lesson that saints do not exist in isolation. They only exist in the communion of saints, all those holy men and women who have been baptised in Christ and are therefore each other’s family. Saints are formed by their participation in this communion (which is itself formed by Christ), and in turn they help others become more Christ-like.

Five of the nine videos have already been released. “It Ain’t Over” tells the story of the early days of Ed’s diagnosis. He is saved from withdrawal into social isolation by his wife and a friend named Billy, who tells him, “It ain’t over ’til it’s over.” Ed says that “Billy’s phone call was God speaking to me with a New York accent.”  This video speaks to the positive cycle of holiness: receiving encouragement leads to the receiver encouraging others (cf 2 Corinthians 1:4).

Similarly,  “Consider the Birds” and “Be There” follow the effects of this cycle of encouragement. In the second video, Ed gives his son a blue index card with Scripture written on it as the son goes off to war; this card is later passed on to a friend of the son’s who is injured by an IED. The symbol of encouragement in the third video is a Corvette, which is passed on from one friend with ALS to another. Ed explicitly points to this cycle of mutual encouragement: “I found great courage in knowing JJ, and yes, I feel an obligation to pass that on to as many people as possible.” And again, “Our paths cross … so we can mutually encourage each other.”

“My Garden” deals with Ed’s desolation after leaving his job as a pastor, and moving from being a caretaker of souls to having no one to tend. His purpose as a Christian, and especially as a pastor, is to help others: “Part of the way we worship God is by serving and taking care of the garden. My garden today is meeting people and helping them in their journey.”

One means of helping people in their journey is reconciliation – repairing the broken bonds of relationship. “Ask Forgiveness” was the most powerful for me. It looks at the relationship between Ed and a former staff member of his church who was fired prior to his diagnosis. When she went to him for support, he did not give it, leaving her feeling “betrayed, marginalized, abandoned.” After Ed’s diagnosis, he wrote out a list of everyone he was aware of having offended, and started going down the list making amends. The staff member recounts the experience of having her former pastor and boss come to her home and literally kneel to ask for her forgiveness. The video reminded me of a person I had recently offended, and I had to stop the video halfway through to write and send them a note of apology. The cycle of holiness continues: by watching Ed’s pursuit of reconciliation with the person he had hurt, I was encouraged to do the same.

The growth of this cycle of holiness is the purpose of hagiography, of telling the stories of holy men and women. By receiving encouragement from the examples of our modern-day brothers and sisters in Christ – the saints, the holy ones of God – we are empowered to encourage others with the same encouragement which we have received. And so the cycle of holiness – the cycle of saint-making – continues, by the grace and power of Christ.

Cole Matson is a second-year PhD student in the Institute for Theology, Imagination & the Arts, studying the ethics of the artist-audience relationship in the theatre. He is the Guest Contributions Editor for Transpositions.