Danny Boyle, the British film director who is responsible for Trainspotting (1996), Sunshine (2007) and Slumdog Millionaire (2008), reprised his early directorial career on the stage with a modern adaptation of Mary Shelley’s Frankenstein in 2011. Starring Benedict Cumberbatch and Jonny Lee Miller, both actors swapped the roles of Victor Frankenstein and Creature every night. Lauded as an incredible success by critics and viewers alike—indeed, it even graces the National Live Theatre in film form every year around Halloween—Boyle’s reimagination of this gothic classic is a testament to the timeless nature of the story, and moreover its pressing prophetic message for our biotechnological age.

The narrative is most famous for representing the hubris of the scientist, but as both Boyle’s adaptation and the original text itself bear witness, many other themes are just as important and explored in the tale. Of particular relevance to those interested in theology and the arts is the treatment of human creation and the ethics of self-imaging in the creative act. As many critics of Frankenstein have claimed over the years, what is so compelling and original about Shelley’s work is that it is a creation story for a modern scientific age. A story where, yes, humanity is at the visible centre of the protological creative act, and yet God haunts the entire story in the background like a silent king on a chessboard: no direct action, but even in silence revealing His importance and presence throughout. 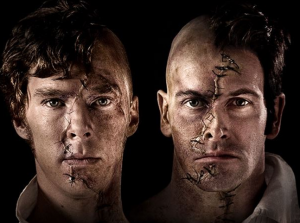 At the heart of Boyle’s play and the original novel is an experiment in self-imaging. Not only does Victor Frankenstein literally try to scientifically fabricate a rational creature in his own image – a real living person – but the entire story is itself a dialogue, a commentary, an experiment on the very nature of self-imaging. It is worth reflecting on the conditions of Mary Shelley’s life and the context in which Frankenstein was written, for it throws into relief the central importance of creation and self-imaging in the novel.

Mary Shelley was very young, and pregnant, during most of the time she completed Frankenstein. She had already given birth and suffered the loss of a child, and so was intimately aware of the dangers involved with childbirth and the desires that can often accompany such loss. She wrote in her diary in 1815: “Dreamt that my little baby came to life again; that it had only been cold, and that we rubbed it before the fire, and it lives.” Her inner circle was made up of some of the most socially progressive intellectuals of her time, and she would have invariably discussed with fervour the radical changes science and technology were making to modern society. She, a pregnant teenage girl, reflected on these changes and instead of focusing on the technicality and minutia of the scientific achievements, as someone like Jules Verne might later in science fiction literature, chose to respond to the potential societal and personal repercussions that might ensue from radical medical and biological experimentation.

At the climax of Boyle’s play – Frankenstein’s wedding night – the spectator is challenged with one of the most profound social and personal quandaries this science and technology poses: the blurring of the self-imaging act found in begetting and that of creating through science and technology: that of our human hands. The following exchange between Frankenstein and his fiancé, Elizabeth, elucidates this challenge well:

Elizabeth: I have never doubted your brilliance.

Frankenstein: I have beaten death. I have done it. I have made a living thing…

Elizabeth: But if you wanted to create life…

Elizabeth: Then why not just give me a child?

The play explores a world where both senses of human creation are collapsed into each other and the spectator experiences the tragedy that ensues because of it.

Frankenstein embeds his image in Creature. As the craftsmen of the creature, how could he not? As anthropologist of art Alfred Gell maintains, we ought to expect the embedding of personal characteristics – an image – of the creator in the very things created, whether they are intentionally placed in them or not. Gell refers to those material instantiations of the creator in the created as eidolata.[1] In fact, Gell goes so far as to say these eidolata actually extend the very personhood of the creator.

This self-imaging is taken to new levels in the play, for one of the intentions in swapping the two leads in alternating roles was the expected cross-pollination of the two characters by the same actor in subsequent evenings.

So, when Jonny Lee Miller plays Creature, having played Victor Frankenstein the night before, he tacitly and intentionally draws on the mannerisms, behaviours and personality traits of Frankenstein when playing the part of Creature. Creature is literally a self-image of Frankenstein because of Frankenstein’s creative act.[2]

Yet, what underlies this creative act? What is Frankenstein’s intention in making Creature and what is his disposition as the creator? It is clear from the book that Frankenstein creates out of a desire to unlock the mysteries of the natural world, but perhaps more interesting is that Frankenstein cuts off all contact with his friends and family, and especially Elizabeth, when fabricating Creature. It is out of this solipsistic individualism that Creature bears the image of Frankenstein. The great tragedy of this creative act, this self-imaging, is that the drive to create Creature is not borne out of an abundance of love (for his friends and family and especially Elizabeth), but merely that of technical acumen: Can he create life alone, without anyone else?! It is an act to create alterity by himself (a genuine ‘other’). Yet, it does not arise from alterity as borne from relation with others, and so will always be doomed to failure: it is a false alterity, just a distorted and cracked mirror. 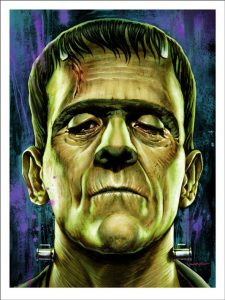 Frankenstein understands his work to be stillborn for, upon seeing Creature come to life, he reviles his creation. The rest of the story is merely the consequence of Frankenstein’s first creative act, his guilt and revulsion for it and his failed responsibility toward Creature. Most film depictions focus the cause of Frankenstein’s revulsion on the grotesque features of the creature: the moist and scarred green skin, the hollow yellow eyes and the oddly-shaped body. However, Frankenstein recoils just as much from the guilt of his act­ – ‘My God, what have I created?!’ – as the physiognomy of Creature. In fact, perhaps what Frankenstein is so repelled by in the creature isn’t just his haphazard technique transmogrified into misshapen form, but instead his own self-image. Creature imperfectly reflects Frankenstein and what is more, bears the impression of his own sinful nature. In this way, isn’t the story of Frankenstein a cautionary tale that all of man’s projects that bear solely his image are doomed to failure, because what lies behind every intention – even the will to create – is a being corrupted by sin? All projections of the self will bear the mark of the creator – and for humanity, sin overwhelms that creation.

Perhaps Frankenstein’s revulsion is a sign not simply of the perversion of the prototype visible in the created, but additionally serves to underline the broken, piecemeal insufficiency of human creation when juxtaposed with that of the Ultimate Creator. It is said that humanity shares with the Divine its creative faculties, albeit of a different, lower order. Perhaps Frankenstein’s recoiling at Creature in that moment indicates the great disparity between divine and human creation: no contingent being could ever match the sufficiency or perfection of the Creator God. Or, finally, Frankenstein’s revulsion might come from a recognition of his misplaced desire in the act of creation that endeavours to make too much of this creature in his own self-image. The problem is that his desire to create something of like-kind is not a product of love-in-relation, as indicated above, and that this self-image is then related to as an intended something that the self-image would never be able to reciprocate or handle. This kind of self-imaging is only possible in a filial relation that is birthed out of love and relation.

Yet, Frankenstein’s sin in self-imaging does not stop here. Frankenstein’s second sin is that, after creating the creature, he does not properly attend to Creature. Even though Frankenstein does not share a common nature with his creation, he still bears a responsibility to it: to care for it and, in a way, love it. This second sin seeks to eradicate the first by destroying the creature altogether. Yet, we are reminded that Creature is still a creature: it has being, a kind of animation and owes its ultimate existence to God.

Therefore, in light of this indebtedness to God for existence, Frankenstein still must live up to his obligation as both a creator of this creature and as a fellow creature before God.

Much of the story is taken up with Frankenstein’s lack of care and love for Creature. In fact, in Boyle’s play the narrative is depicted from the point-of-view of Creature so that the audience sympathises with the creature’s plight and simultaneously feels the injustice and tyranny of Frankenstein’s condescension, dismissal and violence toward his creation. Therefore we, as the audience, feel the weight of Creature’s final words to a dying Frankenstein in Boyle’s play: ‘All I ever wanted was your love!’ In the end, Frankenstein does not properly attend to his self-image: he first makes too much of it, born out of scientific solipsism, and then he makes too little of it. This experiment in self-imaging is truly a tragedy.

Three lessons from Frankenstein are instructive to us today. First, Frankenstein reminds us that our creative acts cannot be separated from our inner intentions and dispositions in the creative act. The spiritual preparation that iconographers undergo before and during their crafting of icons elucidates how important inner dispositions are to anything that we create. Therefore, the created thing is more than just the blueprint actualised; it bears the virtues we embody and the intentions we bring to it. Second, and related, Frankenstein reminds us just how intimate and personal creative acts are. We are reminded that God’s ultimate act of creation arises out of and alongside his love of the Father for the Son, and because of the Son, for each of us individually and personally. Frankenstein depicts what creation looks like when it is neither personal nor steeped in love. Finally, the haunting spectre of new biotechnologies invites us today to consider quite literally what Mary Shelley only considered in abstraction. What virtues do the craftsmen of the biotechnology industry today embody? What are their intentions when creating, and is it grounded in love or in pure utility and technical acumen?

[2] In fact critics are quick to note that Frankenstein and Creature are so entwined and inseparable in their identities that the Creature is often mistakenly called Frankenstein in public consciousness and Creature has no separate name in the text.