David Brown has written, ‘Dance’s continuing engagement with the divine stands as a silent reprimand to the Church for so arbitrarily narrowing its own horizons.’ [1] Four examples of professional, world-class dance’s engagement with Christianity through the life of Jesus or other biblical themes, including creation, occurring within the last five months are Scottish Ballet’s performance of MC 14/22 (Ceci est mon corps) at the Edinburgh International Festival, Hamburg Ballet’s restaging of John Neumeier’s St. Matthew Passion in Hamburg, Germany, a tour of Alvin Ailey American Dance Theatre’s signature Revelations in the UK, and a post-modern dance performance titled Tanz im Grünen, in Heidelberg, Germany.

Ceci est mon corps presents events in the life of Christ, interwoven with references to contemporary society. The work seems to be a positive appraisal of the character of Christ as well as of the beauty of the contemporary male dance body, presented along with a view of the harshness of social reality. It begins with cooperative and coordinated narrative and abstract behavior. Various oppressors are depicted in the dancework as a man attempts to sing religious music but is mocked, and another attempts to dance but is progressively duct taped until motionless. Intermittently, static scenes of ‘the Last Supper’ are presented in which the men collectively pose around the table in the postures of a contemporary activity (sport, war, and so on). The final scene is visually and musically dominated by a crucified Christ figure, foregrounded by a second scene of cooperative and coordinated behavior suggestive of renewal. The array of behaviors presented and the emotional trajectory through which the audience is taken is thought-provoking, about the activities of Christ, contemporary masculinity, and human behavior.

Neumeier’s St. Matthew Passion, one of his many biblically and religiously themed works, includes abstract pattern, drama, and emotional evocation to tell the Passion story. Neumeier’s comments about this work include that dance should have the opportunity in Western culture to ‘communicate metaphysical messages.’ He also says: ‘That the spirit of classical ballet may bring about a reawakening of the liturgical mystery seems to me to be a possibility.’ [2] The order inherent in classical dance, and particularly the personal investment of the dancers in their roles in this work likely contribute to the meaning of his comments.

Finally, Alvin Ailey’s Revelations, as what is likely the most widely seen modern dance work in existence, has special relevance to Christianity. The work is inspired by Ailey’s childhood experiences in a Texas Baptist church and is set to African American spirituals. Fix Me, Jesus accompanies a beautiful pas de deux within a series of dark and wandering dances, followed by a series of dances celebrating baptism (such as Wade in the Water), and concluding with dances in a church setting, suggesting working out the spiritual journey in a daily life context (such as Rocka My Soul in the Bosom of Abraham), to the audience’s delight.

A newer work accompanying Revelations on this occasion, Exodus, is choreographed by Rennie Harris in a style that merges hip hop, ballet, and modern dance. Exodus includes multiple scenes whose most obvious interpretation is of physical death and resurrection. Although the audience laughed upon his response, an Ailey artist fielding questions after the performance described the piece as depicting a shift from mortality to immortality. Rehearsal Director Matthew Rushing explained that his ultimate involvement with dance and the Alvin Ailey company began when he saw a performance of Revelations shortly after having been baptized himself. [3] 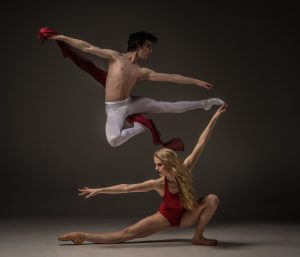 At a recent contemporary dance performance in Heidelberg, Germany, Tanz im Grünen, audience members were asked to reflect and write down their vision of paradise on cards and affix them to the space of the performance. [4] At the beginning of the performance trained dancers presented a sequence involving apples, nudity, and verbal or physical references to Eden, sex, a wasteland, a center, growth, and a dramatic end. Highly trained vocalists then performed sacred music, and the audience was ultimately invited to progress to a further room in which vocalists, dancers, and audience members sat or laid on the floor with moving digital images of nature projected on the walls and the vocalists performing supine amongst the general group. In a further room, refreshments were partaken of amidst live jazz music and still images of nature. The audience ultimately was allowed to progress, this time unannounced, into an outdoor labyrinth composed of urban accoutrements, the audience apparently now being fully integrated with the performance. This work provokes both thought about ultimate reality and meaning, and, physical experience of immediately created, tangible community and therefore reality and meaning.

Religion is greatly intertwined with dance and examples of spirituality ranging from meaningfulness to habit to historical transcendence are on offer. Also, the beauties of dance are in some ways indivisibly connected with matter, making it inconsistent with a view of matter as having no inherent value or meaning.

Consideration of the art of dance and its history helps preclude seeing meaning as either wholly material or wholly spiritual (or an unbalanced combination), which fits well with Christian teaching about the immortality of human life and the goodness of all of God’s creation.

Western concert dance also engages with practical matters of interest or benefit to Christianity, as it resists Western tendencies toward hyper-individualism in its training and performance requirements, and inherently resists technological living overly disconnected from the body and movement. At the same time, its exploration of spiritual ideas can help temper philosophical pulls toward the complete obliteration of the individual. Finally, dance can also help correct excessively stretched gender binaries in Western Christianity, as seen in part through Ceci sont mon corps.

A resource from historical Christianity of potential interest for dance is Doctor of the Church Thomas Aquinas’s argument that outward bodily movements such as ‘the laughter of the teeth’ and ‘the gait’ of a person show what he or she is. There are virtues regarding movement, pertaining to ‘affability’ and ‘truthfulness.’ These relate to considering the pleasure and pain of others, as well as to self-authenticity (in this case within the general framework of Aquinas’s theistic worldview). [5] Dance excels as a particular way of achieving self-transformation through training and encouraging cooperation amongst persons and entities, and dancers also see physical movement as a critical location and substantiation of this.

Amy Smith is a PhD candidate in the Institute for Theology, Imagination & the Arts (ITIA) at the University of St Andrews. Her research looks at the interface between dance and theology.

“Why is it that you like to read such dark stories?” As a literature professor at a small evangelical Christian college, I often get…