Editor’s Note: The Institute for Theology, Imagination and the Arts is planning an international conference on Theology and Science Fiction for 2016. Watch this space for updates.

In 1962, C.S. Lewis and Kingsley Amis talked over drinks about the developing genre of science fiction. Lewis’ favourite of his own science fiction novels, Perelandra, was just being adapted as an opera, and the colleagues discussed the essential qualities of the genre and of that particular book.

Kingsley Amis argued that the heart of a science fiction novel was neither its ‘science’ nor its ‘fiction’ (in the sense of its story or plot), but its mood or imagery, capturing some aspect of the abiding but elusive human sense that our world is at once strange and familiar, full of both wonder and horror, a whole world yet a tiny planet in an intractable universe.[1] Lewis chimed in: ‘If some fatal progress of applied science ever enables us in fact to reach the Moon, that real journey will not at all satisfy the impulse which we now seek to gratify by writing such stories…. In a deadly sense [it’ll] be just like anywhere else’.[2]

Lewis’ own writing of Perelandra was dominated by just such a central image: ‘The starting point for my second novel, Perelandra ’, he told Amis, ‘was my mental picture of the floating islands. The whole of the rest of my labours in a sense consisted of building up a world in which floating islands could exist. And then of course the story about an averted fall developed. This is because, as you know, having got your people to this exciting country, something must happen’.

In Lewis’ novel, a Cambridge scholar travels to Perelandra or Venus, a young planet covered by a golden sea on whose surface luxuriantly verdant floating islands glide in and out of touch, overlooked by only one mass of mountainous fixed land. A first man and a first woman, majestic but also child‐like, spend their days moving freely from island to island—at once the ‘noble savages’ of Romantic literature and the Adam and Eve of Milton’s Paradise Lost:

The floating islands, the flat golden sky
At noon, the peacock sunset: tepid waves
With the land sliding over them like a skin:
The alien Eve, green‐bodied, stepping forth
To meet my hero from her forest home,
Proud, courteous, unafraid; no thought infirm
Alters her cheek— [3]

For Lewis, as a writer steeped in the Christian tradition, the lushness and innocence of this new world naturally suggested the religious idea of a new Eden—a world not (yet) fallen into sin. This religious interpretation was not a mere tag‐on; in fact, Lewis thought that science fiction couldn’t do without a spiritual dimension: ‘No merely physical strangeness or merely spatial distance will realise that idea of otherness which is what we are always trying to grasp in a story about voyaging through space: you must go into another dimension. To construct plausible and moving “other worlds” you must draw on the only real “other world” we know, that of spirit’.[4]

The reverse also held true for Lewis: The sense of ‘otherness’ that science fiction sometimes evokes so successfully through the image of outer space or a parallel world does not actually have to do with any place at all, but with the undeniable presence of ‘spirit’ in a physical universe. ‘No man would find an abiding strangeness on the Moon unless he were the sort of man who could find it in his own back garden’.[5]

To Lewis, that strangeness came to a head in the human propensity for goodness and creativity beyond hope on the one hand, and lethargy, malice and corruption unto despair on the other. The story of the Fall – and his own re‐telling of it as the story of an averted Fall, or of ‘Paradise Retained’ – was rich soil for the exploration of big questions about providence and free will, innocence and experience, the essence of myth and imagination, and the nature of sin.

In interlacing space travel and an imaginative journey to a sinless world, Lewis is also trying to explore and develop the nature and significance of the genre of science fiction—the ability to embody spirit in a way that usually music does better than words. Perhaps it was partly for this reason that he called the climax of his novel ‘operatic’, and was so enthusiastic about the idea of its musical adaptation.[6] 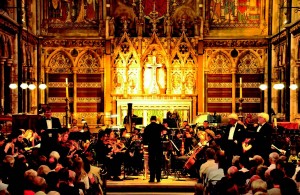 The composer Donald Swann, famous for his comic collaboration with Michael Flanders, wrote an opera of C.S. Lewis’ Perelandra, which – though critically acclaimed at the time – has remained virtually unperformed (read more here).

Listen to excerpts from the opera:

“No Man May Shorten the Way”: No-Man-May-Shorten-clip

Judith Wolfe is Professor of Philosophical Theology at St Mary’s College, University of St Andrews. She has recently edited an essay collection on Perelandra: C.S. Lewis’s Perelandra: Reshaping the Image of the Cosmos (Kent State University Press, 2013). More information is available on her blog.