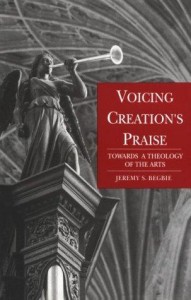 We have now arrived at the fourth installment of our series on comparing divine and artistic creativity. In previous posts, Part II and Part III, I considered two different theological approaches to human creativity. The first roots creativity in the structure of humanity, while the latter roots creativity in the function of humanity. The first is concerned with what humans are, and the second is concerned with what humans do. The third approach – the relational approach – significantly changes the terms of the game.

We can begin by recognising that in the humanity of Christ, our humanity has been incorporated into the divine life by the Son of God, set free by the Spirit from its debilitating self-obsession, from its self-will and its evasions of the truth, liberated to respond to the Father’s love and his will, and freed to respond appropriately to the created world. Therein lies the very foundation and source of authentic freedom and authentic creativity.[3]

He envisages the artist’s unique role as a “priest of creation”: “to articulate and extend that praise in ever fresh ways … In human kind, creation finds a voice.”[4] Begbie explores a comparison between divine and artistic creativity, but he does so obliquely by applying the same terms to both. Both divine and human creativity ‘respect’ and ‘redeem’ creation. For example, he says that in artistic creativity “there will be a redeeming of disorder, mirroring God’s redeeming work in Christ, a renewal of that which has been spoiled…”[5] Begbie clearly suggests a comparison between divine and artistic creativity in which the artist imitates the character of God’s creativity, but Begbie does not develop this comparison extensively.

By describing divine and artistic creativity as participatory, those who take the relational approach raise two further interesting theological questions. First, do artists add anything new to the cosmos?  Recall that those who take the functional approach are wary of the concept of creativity for this reason, but a participatory relationship allows one to suggest that artistic creativity does bring an “added value” to the world without challenging the sovereignty of God. Second, what kind of cosmos can accommodate this vision of artistic creativity? These thinkers often challenge the notion of the ‘givenness’ of creation as something static in favour of a dynamic ‘givenness’ that is graciously intended to be developed in new and different ways.
Do you think that viewing the relationship between divine and human creativity as participatory provides a better framework for artistic creativity?  How does placing human creativity in relation to Jesus change, challenge or inform the ways that we think about the arts?

[2] Full citation of Voicing Creation’s Praise, 181.  Unfortunately, I did not have space to consider Gerhardus van der Leeuw’s Sacred and Profane Beauty, an earlier and very important example of this approach.