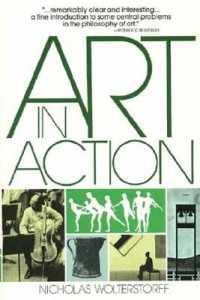 We are now in the middle of a five part series on the role of comparisons between divine and artistic creativity within a theology of art. In Part I, I introduced the topic and suggested that the role of a comparison between divine and artistic creativity in a theology of art is often closely connected to one’s theological approach to the image of God. In Part II, we considered those who regard creativity as part of the structure of humanity. In Part III, we will consider those thinkers who take a functional approach to the image of God. The functional approach is based upon the view that the image of God, in the biblical literature, is linked to a royal ideology. According to ancient thought, the king serves as the representative of God in the same way that an king might use an image or statue to represent his authority and power over land and people.[1] In short, the functional approach is concerned with the function of humanity in creation rather than with what humanity is.

But why should these thinkers be so hesitant to make comparisons between divine and artistic creativity? Both Seerveld and Wolterstorff agree that the autonomy of the individual is the primary theological problem in modern thought. Wolterstorff, for example, shows quite clearly that the modern artist assumes the view that he or she is ‘like a God,’ and he suggests that these divine pretensions are nothing more than the creature rebelling against the Creator.[4]

For those who take the functional approach, the solution to the modern problem of human autonomy is to re-assert humanity’s obedience to God. The functional approach challenges the artist to be obedient to the ‘norms’ God has made in the cosmos and to what God is calling the artist to do. Seerveld writes that “when artistic activity is truly obedient, it will know and disclose a holy freedom that is constrained and driven passionately by the love of Christ, wanting to bring its new offerings close to the workaday people of God.”[5]

The functional approach offers a powerful corrective to the excesses of the structural approach because it emphasizes the importance of exercising freedom within responsibility. But these thinkers have a tendency to emphasize obedience to such an extent that one wonders whether it makes sense to talk of artistic ‘creativity’ at all. By over-emphasizing obedience, they tend to neglect the scriptural themes of grace, gift and blessing associated with divine creativity, and they sometimes fall into the trap of a grace-nature dichotomy when speaking of the human being.[6]

[2] Rainbows for a Fallen World (Toronto Tuppence Press, 1980), 26.  Seerveld’s position on the imago dei is idiosyncratic: “Man is not God’s image, a finite parallel to an infinite Perfection.  Only Chirst is a spitting image of God.  The fact that man is made in the image of God means that men and women carry inescapably around with them a restless sense of allegiance.”