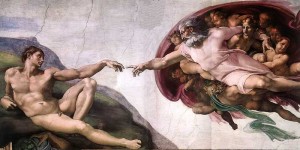 In a series of five blog posts, I would like to suggest that comparing divine and artistic creativity is a very important component of a Christian theology of art. Christians compare God and artists in common speech (saying, for example, that God is like an artist who uses his imagination and makes a world of rich diversity), and they also do so in their more academic and theological writings. In our contemporary setting, the word ‘creativity’ is democratized to the extent that anyone (perhaps anything?) can be creative. A typical definition of creativity goes like this: the production of something new and valuable.[1]  This definition is a very wide net, but in this series of posts, I am only interested in the way that artists are creative.

It  is not difficult to see the potential dangers of comparing artistic creativity to divine creativity.  Many Christian thinkers, most notably Calvin Seerveld and Nicholas Wolterstorff, argue that comparisons between divine and artistic creativity are at best trivial, and, at worst, dangerous for a theology of art. For one thing, Christians traditionally affirm that God creates from nothing (creatio ex nihilo), and setting up God’s act of creation as an ideal for the artist is a burden too great for human shoulders. Furthermore, theologians are sometimes uncomfortable with comparisons between divine and artistic creativity because they might obscure the real nature of divine creativity.