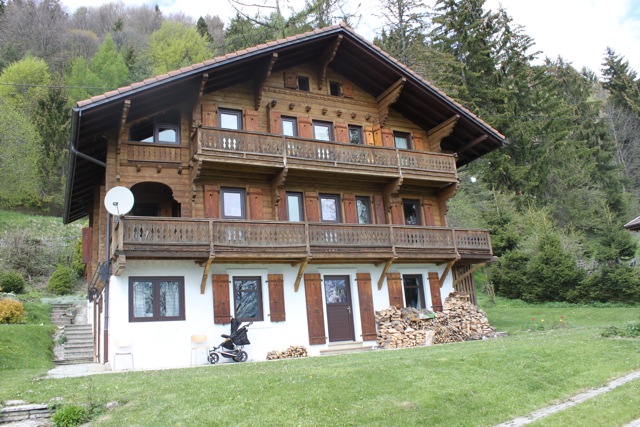 Since the beginning of May, my family and I have had the opportunity to live in the home originally owned by Francis and Edith Schaeffer, where the L’Abri community came into being. This experience has been a privilege in so many ways. The chalet is perched on the side of a mountain, and every morning we wake up to the sun rising over a beautiful Swiss valley. We have taken family hikes on mountain trails and explored the nearby city of Lausanne. I’ve had some time for my own study, reading several of Francis Schaeffer’s books and Edith Schaeffer’s The L’Abri Story.  I’ve also had the opportunity to present several lectures. More than anything else, however, I’ve enjoyed participating in the life the L’Abri community and engaging in serious discussion with those who are here.

The L’Abri community, now over 50 years old, is located just outside a small town called Huémoz in the French speaking part of Switzerland. Francis and Edith Schaeffer began the ministry by opening their home to friends and strangers as a place to discuss important questions about the Christian faith. Christians and non-Christians alike were, and still are, welcome at L’Abri, and the community continues to provide a safe and hospitable environment for discussing questions that are both intellectually challenging and deeply personal.

I think it is fair to describe Francis Schaeffer as one of the twentieth century’s great Christian apologists. He is, perhaps, most well known for his ‘cultural approach’ to apologetics. By this, I mean that Schaeffer deliberately sought out the significant cultural movements of his day, and he considered them in light of his Christian ‘worldview.’ Schaeffer’s writings have had a profound influence upon American evangelicalism; to such an extent that we may now find his work to be a little old-fashioned and simplistic. In his day, however, Schaeffer’s writing and the L’Abri community were a catalyst for more careful thought about the relationship between Christianity and culture. In his foreward to the Francis A. Schaeffer Trilogy, J. I. Packer remarks,

I am sure that I shall not be at all wrong when I hail Francis Schaeffer, the little Presbyterian pastor who saw so much more of what he was looking at and agonized over it so much more tenderly than the rest of us do, as one of the truly great Christians of my time.

I am pleased to say that L’Abri remains a stimulating place where people gather to discuss the ‘big questions’ of our day. L’Abri is even making some impact in the academic community. The Swiss L’Abri’s current director, Greg Laughery, and former worker, George Diepstra, have recently published a series of articles on the relationship between Genesis and science in the European Journal of Theology, and James K. A. Smith, in his book Desiring the Kingdom (Baker, 2009), acknowledges the Swiss L’Abri as a significant catalyst for his current research project.

Even more than the excellent teaching content of L’Abri, the communal life may be its most powerful component. Each day has a set structure that typically includes time for personal study, for work to sustain the community, for group discussion over a meal and for recreation.  For a more detailed account of daily life at L’Abri, you can visit my wife’s blog, where she is posting about each day of the week at L’Abri.

The communal life at L’Abri is something that soaks into your bones, and I like to think of it as practicing the Kingdom of God. For those take the opportunity, it can be a place to explore, in a very practical way, what it means to live in right relationship with God, self, others and the environment. The practical side of L’Abri is like an engine room, which ensures that the intellectual side remains vibrant and relevant.

L’Abri is a wonderful place, and I cannot recommend it more. While the Swiss L’Abri is where this ministry began, now you can find other L’Abri communities all over the world.  See L’Abri International’s website for more information, and for ways to support this ministry.

If you have any questions about L’Abri, please leave a comment and I will answer to the best of my ability.