Christians are quick to claim a comedic faith, highlighting not the hilarity of Christian existence, but the ultimate victory won by Jesus over sin and death providing the experience and hope of resurrection life. When faced, however, with the reality of unexplainable suffering, destructive disasters, our own dastardly deeds, and all the persistent banalities and confounding complexities of everyday life, does a comedic confession require qualification by a down-to-earth dose of the tragic?

Many people read and study theology in order to explore answers to life’s big questions: Who is God? Who am I? What is the purpose of life? Is life ‘a tale told by an idiot signifying nothing’ or the theatre of God’s glory? If the latter, then how do we explain evil? In answering these questions, Christian theologians must confront the danger of too hastily smoothing over what Ben Quash calls the ‘woundedly embroiled’ nature of human experience with speculative and abstract theories (15). Attached to each abstract theory, moreover, are convenient clichés, confidently uttered despite contrary experience. While Christian theology might encourage us to believe, for example, that ‘God works for the good of those who love him,’ does this theology also enable us, let alone empower us, to release wounded cries of lament, to express freely feelings of doubt and confusion, and to question accepted doctrines and even God himself? 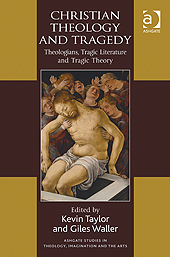 The recent collection of essays edited by Kevin Taylor and Giles Waller advances the claim, previously articulated by the late theologians Donald Mackinnon and Hans Urs von Balthasar, that tragic literature and theory is a gift to Christian theology precisely because it helps theologians to resist totalizing theories and to wrestle honestly with ‘the mix and tangle of contingent loss and moral culpability,’ as Larry Bouchard summarizes the tragic condition (183). Several contributors directly challenge erudite detractors of the tragic such as John Milbank and David Bentley Hart who, while correctly resisting the reduction of Christian experience to the tragic, fail to see the ongoing relevance of a tragic perspective within a peaceful ontology.

Each contributor communicates a unique perspective on the dialogue between tragedy and Christian theology, but two common themes emerge regarding the nature and relevance of tragedy for Christian reflection and action. First, tragedy shows us that human culpability is inescapable, since more often than not, as Ben Quash observes, our capabilities morph into culpabilities (18). Or as Kevin Taylor remarks, tragedy enables us to take seriously the ongoing results of original sin and the paradoxical condition of being simultaneously saint and sinner, simul justus et peccator as theologians like to say (145). But merely developing a robust doctrine of sin misses the point, which is to stop explaining particular sins with abstract theories and to leave room for aggravating ambiguities.

Second, tragedy does not allow theology to ignore the contingencies of everyday life. Our knowledge is finite, our bodies are frail, and many of our efforts are lessons in futility. In fact, as Michael Ward observes, whereas a degree of grandeur resides in tragic literature, most of our lives lack literary splendor (158). Nevertheless, Robin Kirkpatrick asserts the enduring value of tragic literature:

Without Job, Timon and Lear (and, more recently perhaps, Samuel Beckett) the practices of a civilized world would continue to be little more than a flimsy protection against the whirlwind. Tragedy insists that we should see nakedly the bare and, logically, uncompromising condition of human existence, and wait with this vision as given to us, not presuming to know what the promised end will be. (97)

In one sense, however, Christians do know what the promised end will be as a result of God’s gracious revelation, and this is part of the good news. But as Craig Hovey suggests, whereas Christianity may be a comedy according to our knowledge, it is often more like a tragedy according to our experience (176). Good theologians will avoid, of course, false dichotomies between the objective, theoretical, and comedic and the subjective, experiential and tragic. Lose either one, and you drain the drama out of theodrama.

Despite the overall insistence that tragedy resists abstraction and theorizing, this book contains a disconcerting amount of theory, and the title itself invites ‘tragic theory’ to the table. A certain amount of theory may be unavoidable, but David Cunningham rightly warns that without attending to particular performances, Christian theology will tend to ‘hypostasize’ tragedy and make sin necessary, which is the crux of John Milbank’s critique (218). But when we become audience members engrossed in the unfolding story, seeing alternative possibilities within dynamic interactions and encountering temporal, embodied performances of live characters, it is easier to feel the tensions and to imagine a different ending. In short, by experiencing tragedy in the context of real performances, we are liberated to imagine the way it’s supposed to be: the comedy within and beyond the tragedy.

What, then, is the right relationship between tragedy, comedy, and the Christian life? Is it the case, as Ben Quash maintains, that the Christian life, while shot through with the tragic, is hypertragic because of our gift-giving, self-giving God (31)? Or did C. S. Lewis phrase it better by confessing Christianity as a ‘tragi-comedy’? However we word it, theology that jettisons the tragic will, at the very least, distance itself from the woundedly embroiled reality of everyday life, and at worst, diminish the suffering of the Son.

Indeed, the Son’s tragi-comic performance requires our foremost attention, first as the unrepeatable self-presentation of God, revealing the meaning of the theodrama and a means to participate, and then as the improvisation of the Suffering Victor who, by beholding his beauty, forms us to perform more and more like him.