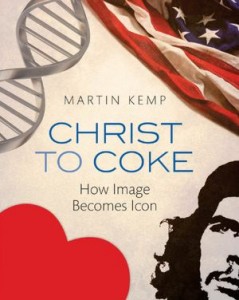 What images deserve the status of ‘icon’? In his newest book, Martin Kemp brings the trained eye and scholarly method of an art historian to bear upon eleven of the most well known images in Western culture. I had hoped that Kemp would begin this ambitious project with a definition of ‘icon.’  In the introduction, what we find is a working definition of icon that might be summarized as images that are very famous and that carry rich associations in contexts far beyond their original making.  At the end of his book, however, Kemp offers some more descriptive, and theologically interesting, comments regarding ‘icons’. I will discuss Kemp’s conclusion in due course, but, first, what are the cultural icons that Kemp brings to our attention?

Kemp’s icons are Christ, the cross, the heart, the lion, Mona Lisa, Che Guevara, Nick Ut’s Villager’s Fleeing along Route I, the American flag, Coke: the bottle, DNA, and E=mc². Kemp chose these icons to represent different types. Christ, as Kemp suggests, seems to transcend all types, but the others are fairly easy to identify: the cross as religious icon, the heart as bodily icon, the lion as animal kingdom icon, Mona Lisa as fine art icon, and so on.

One interesting feature of these iconic images is that the stories of their making tend take on a legendary status. On this point, the icon of Christ serves as a kind of ideal icon. Kemp’s chapter on Christ primarily focuses on the significance of archeiropoietos for this icon tradition. Archeiropoietos are images not made by hand, and so are believed to have a miraculous origin. Kemp mentions, for example, the cloth of Veronica and the shroud of Turin. One might think of appearances of Christ in random places, such as a piece of Naan bread, as contemporary archeiropoietoi.

Many of these images also have more humble, and sometimes even accidental, origins. One particularly humorous example is found in Kemp’s chapter on Coke: the bottle. In 1915 the Coca-Cola Company initiated a competition for a new bottle design.  The winners of the competition, from the Root Glass Company in Terre Haute, Indiana, created a design inspired by the ingredients of Coke. They went to the local library and found a drawing of the cocoa pod. With its ribbed shell and bulbous shape, the pod does bear a resemblance to the original Coca-Cola bottle. Ironically, the cocoa nut (used to make chocolate) is not an ingredient in Coca-Cola! Coke does contain an amount of the Kola nut, but this hardly matters as the Coke bottle has surely transcended any associations that its makers may have intended.

For someone interested in the relationship between theology and the arts, the most exciting part of Kemp’s book comes in the conclusion. He suggests that understanding these icons in secular terms simply will not do. Instead, he prefers to stretch what one may mean by ‘religious’ to ’embrace devotion that accords a value to something that transcends all its apparent physical existence’ (340). All of these icons are ‘endowed with a special kind of presence,’ and Kemp writes this as ‘someone not generally prone to mystical and religious beliefs’ (342). For Kemp, this ‘presence’ means that iconic images are granted a unique value that we not only respect, but that can also hold a certain amount of power over us. For a student of theology, this suggests that the language of religion and theology can be important tools for making sense of contemporary culture and that another hole can be poked in the secular/sacred distinction.

In the end, does Kemp tell us how images become icons? Not really. He admits that no definable set of characteristics that define ‘icon’ present themselves, but he suggests, instead, that one might develop ‘icon’ as a fuzzy category. I take these ‘fuzzy categories’ to be something like Wittgenstein’s ‘family resemblances’. Kemp’s fuzzy categories have a strong ‘formalist’ bent, but, as his analyses show, the number of factors involved in tracing the history of an icon is mind-boggling. If nothing else, Kemp’s fascinating study adds to our appreciation of the complexity involved in untangling the significance and meaning of cultural symbols.

Christ to Coke is a fascinating read, and I recommend it to our readers. For someone, like myself, who enjoys the ‘history of ideas,’ it is a little disappointing because Kemp’s writing tends to follow a circuitous route of interesting associations and historical circumstance. Nevertheless, the book is fascinating because Kemp lays bear the historical originations of these icons. As a reader, I remained transfixed on Kemp’s historical tales that translated the ‘divinity’ of these icons into a more ‘human’ register.

For even the most casual listener of Radio 1, it is self-evident that pain, rejection, and love-lost provides a deep well of inspiration for…