Light coming through a stained-glass window is one of those effects unique to the church space—we can hardly witness it anywhere else. Despite, or perhaps because of my amateur love for medieval art history, I was always convinced that the purposes of these windows was to create, with the effect of the sun upon them, colorful light inside an otherwise dark and cold stone cathedral. Little did I know that this mindset was precisely the way in which the first audiences to these unique windows reacted to them. In the beginning of the thirteenth century, stained-glass windows were hardly considered art—only ‘colored mosaics’. [1] But this sentiment is incomplete. As the century progressed, the technique for making stained glass began to resemble non-translucent painting as the images and panel arrangement became more intricate. Eventually, people’s focus on stained-glass windows moved beyond looking at the light that shone through them; they fixed their gaze on what the light was shining upon.

The religious images depicted on these windows are at once a painting in themselves and a filter that paints the church space in different ways during various moments. The way we interact with a stained-glass window, then, might require a different attitude on our end as the viewer. I learned to look at these unique reflections of history very slowly, for one needs several elements to fall into place. I’ll mention the ones that made the most difference for me. The right time of day, when the windows are perfectly lit to see the intricate details of composition, especially with windows where the viewer is forced to stand below and at a distance from the window. A growing knowledge of pictorial biblical references, since these windows feature known motifs in medieval Christian iconography. Historical knowledge, namely of the country hosting these windows, for the artists of stained-glass windows combine known biblical scenes with the history of their own nation, including famous battles and stories. Patience, because most images in stained-glass windows are unconventionally composed—one might even call them abstract—and take some time to learn to interpret. Imagination, both visual and literary, to combine these elements of faith, art, and history and appreciate how they are portrayed all at once in a panel. When all these things are taken into consideration, stained-glass windows become a portal into another century.

The image that marked my appreciation for this form of art was the Charlemagne window at Chartres Cathedral. As a building where no direct sunlight penetrates, the interior is lit only by the light that filters through colorful panels of stained-glass windows. All of the windows contain hundreds of stories depicting the life of various saints, transforming Chartres into a living storybook where the visitors can walk along the church, the story of Christianity unravelling before their eyes. The interplay with light, moreover, transforms one’s interaction within the cathedral from one of observation into one of sensation.

Among the elements that first struck me about the Charlemagne window is the way it is often described compared to its surrounding windows. If you walk down the nave, past the transept, and arrive at the cathedral’s ambulatory, you pass a number of radial chapels featuring in their windows ‘The Life of St. Paul’, ‘The Life of St James the Greater’, ‘The Life of Saint Sylvester’, and ‘The Life and Relics of St Stephen’, and you continue in this fashion until reaching the window that is titled ‘The Legends of Charlemagne’ (emphasis mine). [2] Typically, a stained-glass window would portray, in ascending order, the conversion, good works, martyrdom, and reception of the saint into heaven. [3] This is not the case with the Charlemagne window.

Instead, the master of the Charlemagne stained-glass window makes use of the long size of the frame to implement a layout that is read from the bottom to the top, lifting the viewer’s gaze as he runs through the various scenes (See Figure 1, right). It is comprised of twenty-four panels that recount events, among other images, from two major crusades that were attributed to the king: the Jerusalem Crusade (today considered apocryphal) and his incursions into Muslim Spain. In fact, the choice to depict Charlemagne in his crusades—violently vanquishing enemies—has been a topic of controversy for medieval art historians, who wonder whether the Charlemagne window was meant to inspire worship or whether the intention was more political, so to speak, as a means to convey an approving message about the King of the Franks as the true defender of Christianity. It serves to bear in mind, moreover, that the Charlemagne window was crafted and displayed at a time when Charlemagne was only a historical figure and not yet a saint. Charlemagne was not canonized until 1165.

Beyond his battles, the window depicts Charlemagne’s dedication to Christianity throughout his life as a patron of the church. The overall layout of the Charlemagne window is an interchange between acts of piety and acts of war. The seventh panel, for example, shows Charlemagne kneeling before an altar and presenting a monk with the relics that he received from his crusade (See Figure 2, below). The eleventh panel of this new story shows Charlemagne praying prior to his assault on the Spanish city of Pamplona, and the thirteenth panel shows Charlemagne overseeing the construction of a church that he funded through his gathered riches.

But the most special element in this window is the combination of historical narratives related to Charlemagne with French literature. The window has images from the eleventh-century epic La Chanson de Roland, and it shows iconic scenes from the story such as when Roland sounds his famous horn Oliphant. Realizing that large stained-glass windows are more often than not a large form of illustrated storybooks allowed me to observe them with a more creative mindset. At first, they might look messy and ornate, but that is only until we realize that these windows are not supposed to be viewed as a whole or all at once; rather, we are meant to look at their panels image by image, following the development of a story. A medieval comic book, if you will. Stained-glass windows are designed under what is called a ‘principle of subdivision’, which employs glass pieces that surround the important scenes and figures in patterns and shapes that are meant to complement the figures and draw our eyes to them. [4] 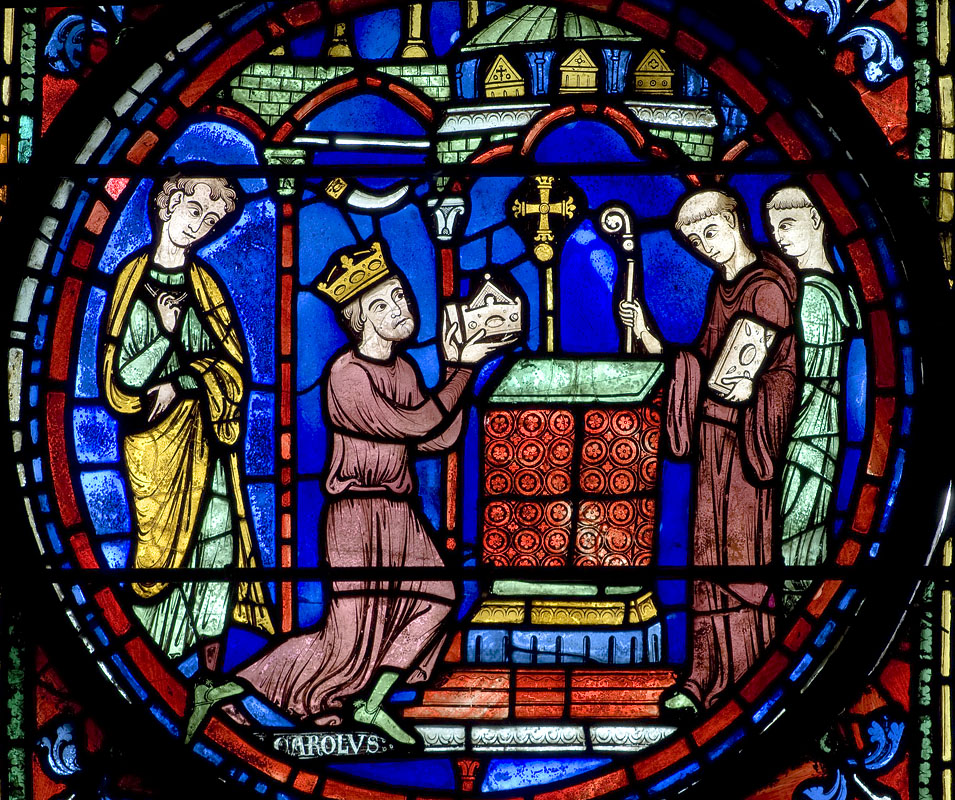 My favorite example of this concept is the scene in the Charlemagne window showing Roland sounding Oliphant (See Figure 3, below). Because this panel represents a well-known scene it requires less realistic detail, and this permits that figures, draperies, and landscapes be abstractly portrayed. [5] Take a look at the panel. It has two ‘trees’ to serve as our background along with blue decorative pieces of glass—that’s it. Roland, our protagonist, is depicted twice in the same panel: on the left, as a knight with his helmet trying to break his sword, Durandel. The sword and rock is even shown as jaded to emphasize Roland’s attempt to break it. On the right, he is now without a helmet and trying to sound his Oliphant. How do we know both figures are Roland? Both have the same red round halo around their heads—an indication from the artist that we are looking at the same figure performing two different scenes from the story in the same panel. The vestment is also similar. Additionally, the abstract imagination of the artist comes through in the way he depicts Roland’s victory by including the opposing fallen soldiers on the ground as mere membranes: some men are represented by just a leg or a head; one particular soldier in green armor is even shown cut in half with his intestines on the floor. 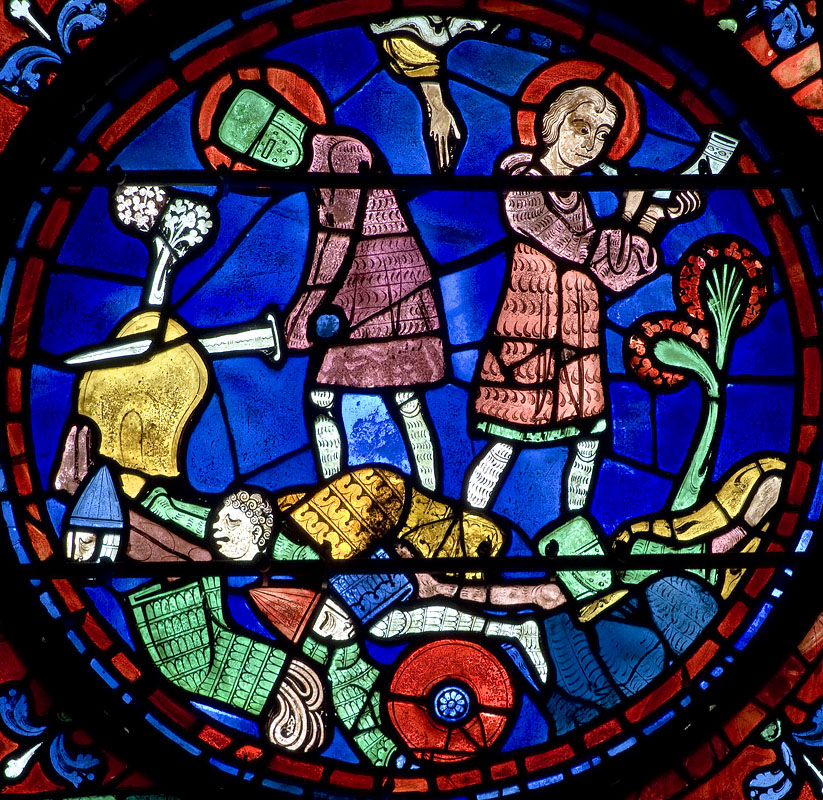 Hardly an image to inspire devotion, the described violence of this scene is depicted in such a way that it is meant to bring focus to the religious message of this well-known medieval tale. At the top center of the panel is the Manus Dei—the ‘hand of God’ coming down from the heavens as a sign of God’s blessing and intervention in the battle. The Manus Dei is a common iconographic image for Christ that appears in churches from the early Byzantine period to the Medieval, and it is the way that the master of this window conveyed a number of pages and a series of events from La Chanson de Roland in just one panel. This inclusion of a famous French tale demonstrates that the Charlemagne window (and stained-glass art) can be, on the one hand, a portrayal of a pious figure. Even more special to the location-specific constraint of stained-glass windows, however, stained-glass art is also an expression of the literary imagination of the country—an illustrated storybook featuring a pictorial uniqueness that inserts history and legend into the frame.

But these stories and images exist within the church space and thus have their greatest impact when felt within the wider story of Christianity. I use the word ‘felt’ instead of ‘read’ or ‘seen’ because the church space is not meant to be only visually absorbed—it is felt as a whole. The silence and reverence of a church creates a special effect that detaches us from the noise of the outside world. Silence is a sound of its own, and it elevates our visual sensibility by complementing the natural dimness of the surrounding stones and statues, producing a peace of mind: A stillness of time. Such silence and stillness in the church space open us, the distracted visitors, to prayer and contemplation. Stained-glass windows work in harmony with these elements—silence, dimness, stillness, prayer—and insert light: into the church space, into us.

[3] Elizabeth Pastan, ‘Charlemagne as Saint? Relics and the Choice of Window Subjects at Chartres Cathedral’. The Legend of Charlemagne in the Middle Ages: Power, Faith, and Crusade, edited by Matthew Gabriele and Jace Stuckey (New York: Palgrave Macmillan, 2015), 97-99.

Pastan, Elizabeth, ‘Charlemagne as Saint? Relics and the Choice of Window Subjects at Chartres Cathedral’. In The Legend of Charlemagne in the Middle Ages: Power, Faith, and Crusade, edited by Matthew Gabriele and Jace Stuckey, 97-135. New York: Palgrave Macmillan, 2015.